Ink addition to the resource in this post, please see the following two articles from the New England Journal Of Medicine:

The above article has been cited by 19 articles in PubMed Central.

Sodium-glucose co-transporter 2 (SGLT2) inhibitors* are glucose-lowering drugs that reduce plasma glucose levels by
inhibiting glucose and sodium reabsorption in the kidneys, thus resulting in glucosuria. Their effects consequently include
reductions in HbA1c, blood glucose levels, and blood pressure, but also reductions in body weight and adiposity. The ability
to reduce body weight is consistently observed in individuals taking SGLT2 inhibitors, but this weight loss is moderate due
to counter-regulatory mechanisms striving to maintain body weight. This has prompted exploration of SGLT2 inhibitors in
combination with other agents acting via decreased food intake, e.g., glucagon-like peptide 1 receptor agonists (GLP1-RAs).
The bodyweight effects are promising, and together with the signs of prevention of cardiovascular and renal events, such
combinations including SGLT2 inhibitors are appealing. The weight loss is clinically important, as most individuals with
type 2 diabetes are overweight or obese, but also because there is an unmet need for safe, effective, and durable weight loss
interventions in obese individuals without diabetes.

With the increasing prevalence of obesity and associated
co-morbidities, including impaired glucose tolerance and
type 2 diabetes mellitus, novel treatment strategies are
needed.

Obesity is a growing health issue that has reached pandemic
proportions, and in the last 15 years the estimated prevalence
has doubled. In 2016, 1.9 billion (about 40%) of the global adult population were overweight or obese, and of these 650 million were obese according to the World Health Organization [1].

The cornerstone treatment for overweight and obesity is lifestyle modification, mainly a lower energy intake in combination with increased physical activity. Adjuvant pharmacotherapies typically have demonstrated modest efcacy, and this may partly be due to physiological counter-regulatory mechanisms. Combination pharmacotherapies may achieve greater bodyweight loss than monotherapies, via additive or synergistic effects, when the individual agents target different pathways [12].

Selective sodium-glucose co-transporter 2 (SGLT2) inhibitors offer an insulin-independent mechanism for improving blood glucose levels and are approved for the treatment of T2D. They promote urinary glucose excretion by inhibiting glucose reabsorption from urine in the proximal tubule in the kidney (up to about 50%). The magnitude of the resulting glucosuria is proportional to the plasma glucose above the threshold [13].

SGLT2 inhibitors (e.g., dapaglifozin, canaglifozin, and
empaglifozin) and glucagon-like peptide-1 receptor agonists
(GLP1-RAs; e.g., exenatide, liraglutide, and semaglutide)
are both used for T2D treatment, but they also lead to bodyweight loss, largely accounted for by body fat reduction.
Moreover, the glycemic as well as bodyweight efects are
sustained over several years with these drug classes [14–16].

However, the magnitude of weight loss is modest both in
T2D and in obesity without diabetes. For approved SGLT2
inhibitors there is on average some 1.5–2 kg weight loss
(placebo-adjusted), for GLP1-RAs 2–4 kg, and for the combination 3–5 kg [17–23]. Thus, there is a need for more
effective weight-loss therapies.

SGLT2 inhibitors have shown consistent reductions in HbA1c levels from baseline in patients with T2D at all time points. Meta-analyses show mean diferences in HbA1c reductions versus placebo of − 1.4% to − 0.5% [20, 22, 24–27]; these reductions are similar to those of other glucose-lowering agents [28].

4 Effects on Body Weight and Adiposity

Inhibition of SGLT2 acts in a glucose-dependent manner and can result in the elimination of about 60–100 g of glucose per day in the urine. Weight loss with SGLT2 inhibitor therapy has been consistently observed in several studies in T2D, whether
patients are taking SGLT2 inhibitors as monotherapy or in combination with additional glucose-lowering therapies (Table 2).

The results of network meta-analyses show reductions of body weight compared to placebo for all SGLT2 inhibitor treatments of about 1.5–2 kg [26–28, 35] and these effects are dose-dependent [36]. Clinical data up to 4 years show that bodyweight reduction with SGLT2 inhibitors is maintained [37–39].

However, SGLT2 inhibitors cause substantially less weight loss than expected from the energy excreted via glycosuria, because it elicits an adaptive increase in energy intake, including compensatory increases in appetite/caloric intake [40].

Therefore, combining SGLT2 inhibitors with drugs acting via different mechanisms might be the most effective approach for major weight loss and address counter-regulatory mechanisms that maintain body weight [41].

Recent studies evaluating the co-administration of SGLT2 inhibitors with other classes of drugs have shown promising results.

In diet-induced obese rats treated with SGLT2 inhibitors, lipolysis and circulating ketone body levels are increased [43, 44]. In patients with T2D or with obesity without diabetes, SGLT2 inhibitor-induced glycosuria lowers plasma glucose and insulin levels and raises fasting and post-meal glucagon concentrations. The reduction in the circulatory glucose concentration, together with the hormonal changes, results in mobilization of lipid storage [24]. This leads to changes in energy substrate use, favoring the utilization of lipids for energy production [45]. Under conditions of reduced portal insulin-to-glucagon ratio, lipolysis increases in adipose tissue and releases non-esterifed fatty acids which are converted to ketone bodies in the liver through mitochondrial beta oxidation and ketogenesis [25], resulting in a metabolic condition resembling a prolonged fast [26].

The possible mechanisms by which SGLT2 inhibitors reduce cardiovascular risk are unknown, but are likely to include reductions in hyperglycemia and body weight, osmotic diuresis, and reduced blood pressure [52–54].

Even though SGLT2 inhibitors are not approved as antihypertensive agents, most trials with SGLT2 inhibitors have reported reductions in systolic and diastolic blood pressure of about 3–7 and 2 mmHg, respectively [24, 56]. Interestingly, the blood pressure reduction seems to be independent of disease status or presence of antihypertensive agents. [The mechanism is not clear.]

Emerging data suggest that SGLT2 inhibitors reduce the
risk of progression of renal disease in T2D subjects, with a
similar beneft in those with and without renal impairment
[27, 61] and with and without atherosclerotic cardiovascular disease [54]. Possible mechanisms of renal protection
with SGLT2 inhibitors are multifactorial and it is likely that
reduction in the glomerular capillary pressure, and reduction
in an initial hyperfltration, can contribute to the reduced
albuminuria and prevention of renal impairment [62, 63].

In obese subjects without diabetes, SGLT2 inhibitors do not alter the estimated glomerular filtration rate or have any
adverse event potentially related to renal impairment or renal
failure over a 52-week period [21].

SGLT2 inhibitors may also be of beneft in T1D, in addition
to insulin, although they have not yet been approved for this
indication. [Please see this section of the paper for more on this.]

One advantage of SGLT2 inhibitors, compared with several other glucose-lowering therapies, is the low potential to induce hypoglycemia, unless combined with insulin or insulin secretagogues [25].

In general, SGLT2 inhibitors are well tolerated and the
most common adverse efect is an increased risk of mycotic
genital infections by about four- to sixfold versus placebo or
active comparator, and this is seen in both women and men
[26, 32].

Recent evidence suggests that episodes of ketoacidosis can also occur [69], and it might be of particular concern among insulin-deficient individuals, including those with longstanding T2D, T1D, or latent autoimmune diabetes in adults (LADA) [70].

Given the modest weight loss delivered by SGLT2 inhibitors, it is not likely that they will be successful as monotherapies for obesity.

The expected weight loss due to loss of up to 400 kcal energy into the urine may be as much as 11 kg [40], but a compensatory increase of food intake probably accounts for the partial off-set of weight loss.

In contrast to monotherapy, an SGLT2 inhibitor in combination with a drug that reduces food intake is appealing
as a means to mitigate the physiologic mechanisms that
counteract weight loss (Fig. 1) [72]. 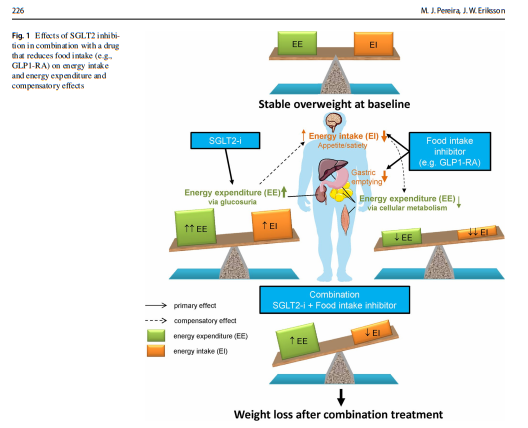 Such combination pharmacotherapy may achieve greater reduction of body weight in two ways.

First, the increased food intake evoked by energy loss during SGLT2 inhibition could partly be prevented by an appetite-reducing therapy.

Second, the reduced cellular energy expenditure occurring after weight loss achieved by an appetite-reducing drug may be balanced by the urinary caloric loss secondary to glucosuria [41].

Therefore, the complementary mechanisms of action
of an SGLT2 inhibitor and a GLP1-RA (through its efect
to reduce appetite and possibly also its ability to slow
gastric emptying) may provide an attractive approach for
obesity treatment (Fig. 1)

Among patients with T2D [40], estimated caloric intake is increased by an average of 10–15% during chronic treatment with an SGLT2 inhibitor; this offsets about 9 kg of an expected glucosuria-induced bodyweight loss of 11 kg over 2 years [77].

From the magnitude of bodyweight loss observed in the current study, it might be inferred that food intake was reduced by the addition of exenatide, thus counteracting the dapaglifozin-induced increase in food intake.

It would be of interest to further explore combination
therapies involving an SGLT2 inhibitor together with
an agent that reduces food intake. Such agents include
novel more efficacious GLP1-RAs such as semaglutide (which is also being developed in an oral formulation) or so-called dual peptides like GLP1+ GIP [78] or  GLP1+glucagon [79].

The most recently approved antiobesity medicines, lorcaserin, topiramate+phentermine, and bupropion+naltrexone, respectively, work mainly via appetite reduction [80]. They could also very well become more effective if administered in combination with an SGLT2 inhibitor.

SGLT2 inhibitors increase glucagon secretion according to some reports, and this might reduce the glucoselowering efect [34]. However, co-administration with GLP1-RA may counteract this effect [73]. The prevention of the glucagon rise might improve the beneficial effects of the combination therapy to enhance glucose control and may support this combination therapy in clinical practice [81].

Several studies support the concept that SGLT2 inhibitors can be efective as adjuvant weight loss therapy when given together with agents that reduce food intake, and such combination treatments appear attractive. In contrast, SGLT2 inhibitor monotherapy is not likely to provide sufcient weight loss for treatment of obesity per se, but could have other benefts in obese patients with comorbidities such as atherosclerotic cardiovascular disease, heart failure, or renal disease. Moreover, further research is warranted to address phenotypic and genotypic characteristics that may help to identify treatment responders to weight-loss therapies that include SGLT2 inhibitors.

This entry was posted in Diet and Nutrition, Diet and Weight Loss, Medical News. Bookmark the permalink.