Links To And Excerpts From “Cryptogenic Stroke: Research And Practice”

All that follows is from the above.

Cryptogenic stroke accounts for 30% to 40% of ischemic stroke. It is essential to determine the possible culprit because this will improve secondary stroke prevention strategies.

We performed a narrative nonsystematic review of the literature that included randomized trials, exploratory comparative studies, and case series on cryptogenic stroke.

A thorough diagnostic evaluation is essential to determine the pathogenesis in cryptogenic stroke. This approach, in addition to risk factor management and lifestyle modifications, will lead to improved stroke prevention strategies in patients with cryptogenic stroke. This will allow for targeted clinical trials to improve stroke prevention strategies in this patient population. 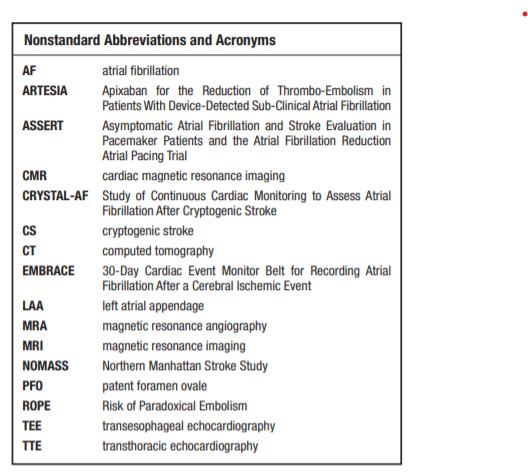 Of the 690000 ischemic strokes that occur in the United
States every year, ≤30% are of unknown cause, or cryptogenic. Several possible mechanisms may underlie cryptogenic
stroke (CS), including but not limited to occult paroxysmal atrial
fibrillation (AF) and other atrial cardiopathies, paradoxical embolism through a patent foramen ovale (PFO), or substenotic atherosclerosis. In the absence of AF, antiplatelet therapy remains the mainstay of treatment in most patients with CS, although the scientific support for this is limited. The aim of this review is to highlight the fact that CS is a heterogeneous disease leading to differences in diagnostic evaluation and therapeutic implications.

Ischemic stroke affects nearly 690000 patients per year in the
United States, 30% of which are considered to be of unknown  cause. With the exception of AF, the prevalence of risk factors
is more or less similar between patients with CS and stroke
of known cause. A major limitation of these studies, however,
is the use of older definitions for CS and the fact that some
strokes were considered as cryptogenic based on incomplete
diagnostic evaluation.

The diagnostic evaluation in patients with ischemic stroke is
widely variable and includes brain imaging, vascular imaging,
and a cardiac evaluation (Table 1). 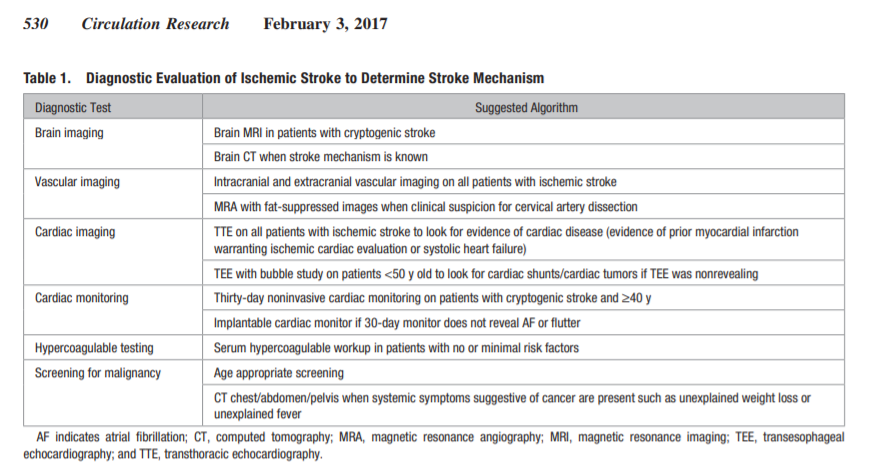 The initial evaluation of patients with suspected stroke includes a head computed tomography (CT) without contrast,
which has a high sensitivity for excluding intracranial hemorrhage.27 Although head CT is widely available, faster to obtain, and less expensive than other imaging modalities, such
as brain magnetic resonance imaging (MRI), it is not as sensitive in detecting small infarcts that may be important to characterize the stroke mechanism. Although MRI and CT have
the same sensitivity in excluding hemorrhage, a brain MRI is
superior to CT in detecting acute infarction.28,29 In addition,
certain ischemic lesion patterns on MRI can aid in determining the stroke mechanism. For example, the presence of acute
ischemic lesions in multiple vascular territories is suggestive
of a cardioaortic source (Figure 1), whereas multiple acute
ischemic lesions confined to one vascular territory may suggest large-vessel disease (Figure 1).30

Therefore, in patients with CS and clinical and CT evidence of one lesion, an MRI may identify clinically covert infarctions in other vascular territories, which may point toward a proximal cardioaortic source (Figure 2).31 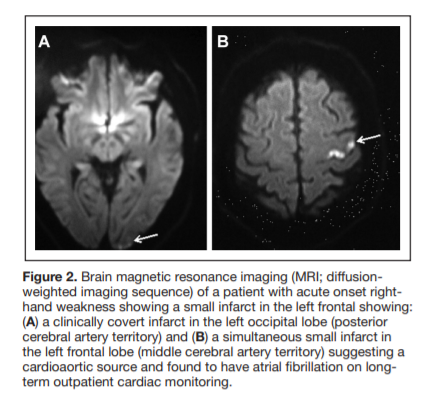 In patients with ischemic stroke, the presence of an atherosclerotic vascular lesion that is causing >50% narrowing of the lumen of an intracranial or extracranial large vessel supplying the area of infarction makes the subtype large artery disease. Because the sensitivity and specificity of imaging modalities, such as MRA, computed tomography angiography, and ultrasound, in detecting atherosclerotic lesions are significantly lower in patients with <70% to 99% stenosis,33 these modalities may not be useful in detecting active substenotic lesions that may be causative of the ischemic event. High resolution MRA can identify an intraplaque hyperintense signal on T1- weighted sequences suggestive of intraplaque hemorrhage.39 In addition, MRA with vessel wall imaging can show contrast enhancement suggestive of active atherosclerosis (Figure 3).31

This imaging modality, however, is not widely available and
only used in certain large tertiary care centers. In addition,
MRA with fat-suppressed images is the gold standard noninvasive test to diagnose an arterial dissection, especially in
the absence of significant luminal narrowing (Figure 4).40
Therefore, in patients with CS, these imaging modalities may
be useful in identifying a vascular lesion that may be a culprit.

Because most of the potential mechanisms in CS are integrally
related to the cardiac system, a thorough diagnostic evaluation
of this system is necessary to identify the stroke mechanism
and improve secondary prevention strategies. This evaluation
includes cardiac imaging and cardiac monitoring.

Several studies showed that transthoracic echocardiography
(TTE) and perhaps transesophageal echocardiography (TEE)
are useful in identifying a potential cardiac source in patients
with CS.31 Studies showed the superiority of TEE over TTE
in identifying potential mechanisms. One study showed that
TEE identified a potential cardiac source in 40% of patients
with ischemic stroke, in which TTE was nonrevealing.41 The
vast majority of these abnormalities were aortic arch atheromas and cardiac shunts.42–44 The advantage of TEE over TTE is in providing better views of the left atrial appendage (LAA),
left atrium, and aortic arch and in identifying cardiac shunts.44 . . . The vast majority of sources identified on TEE only are cardiac shunts and aortic arch plaques, which when identified will not necessarily lead to a change in management in most patients. When compared with TEE, however, TTE is noninvasive, less expensive, and more widely available.44 Therefore, TEE is infrequently performed after CS45 because many of the findings best identified on TEE do not have proven treatment implications and potential safety risks.44

Recently cardiac MRI (CMR) has emerged as a noninvasive diagnostic modality in cardiovascular medicine46 and has
been used by some centers to identify cardiac sources in patients with CS. . . . 4 CMR is at least as good as TEE is identifying
cardiac thrombi and assessing structural and functional parameters of the left atrium and LAA.55 Because the data on the use of CMR is scarce, however, more studies are needed to determine the utility of CMR as a noninvasive tool as a replacement for TEE in the diagnostic evaluation of cryptogenic stroke.

Outpatient cardiac monitoring for occult AF is now the standard of care after a CS because the detection of AF will lead to
anticoagulation therapy that is superior to antiplatelet therapy.56 Studies have shown that the longer patients are monitored, the more likely AF is detected.

The prevalence of hypercoagulable states in patients with
ischemic stroke ranges between 3% and 21% in ischemic
stroke.61 Most of these are associated with venous rather
than arterial events, with the exception of antiphospholipid
antibody syndrome that can cause both arterial and venous
systems.62–64 The overall pretest probability for all hypercoagulable states as detecting a potential source for thrombosis has a reported range of 5%.61 Therefore, given the low diagnostic yield and high cost, it is important that clinicians are judicious in choosing appropriate testing based on pretesting probability. The yield of such tests may be higher in younger patients with minimal or no vascular risk factors, in recurrent venous or arterial thrombotic events, and in the presence of positive family history.61–64 In addition, levels of some of these tests, such as protein S and protein C, may be falsely abnormal in the acute setting after a stroke, and therefore, it is best to measure them a few weeks after the event.65 Moreover, the presence of antiphospholipid antibodies (lupus anticoagulant, anticardiolipin, or anti-β-2-glycoprotien) does not imply the diagnosis of antiphospholipid antibody syndrome because the diagnostic criteria require repeated testing 12 weeks apart.66

The incidence of stroke in patients with cancer is nearly 7%,67
most of which occur in the first few months after cancer diagnosis. This is likely related to hypercoagulability through
alterations of the homeostatic cascade, the integrity of the endothelium, and platelet function.68–70

Stroke mechanisms in patients with known cancer may
differ from those that occur in the general population,71,72
with cryptogenic stroke subtype being the most common subtype and associated with reduced survival.73 Cancer-specific mechanisms include marantic endocarditis, intravascular coagulation, and tumor embolism. Of all cancer types, studies
have shown an increased incidence of thrombotic events in patients with adenocarcinoma when compared with other types
and lung and pancreatic cancer when compared with other
locations.73,74

An evaluation for occult malignancy as a cause of CS
should be considered once other potential mechanisms are
excluded, especially in older patients with systemic symptoms suggestive of a cancer diagnosis, such as unexplained
weight loss. Patients with cancer are more likely to have
infarcts involving multiple vascular territories.75 There is a
relatively low yield of diagnostic testing when looking for
an occult malignancy in the absence of systemic symptoms
suggestive of cancer. Some of the tests commonly performed
include age-appropriate cancer screening modalities, serum
inflammatory markers, such as erythrocyte sedimentation rate, and computerized tomography scan of the chest, abdomen, and pelvis.76

Several mechanisms are implicated in patients with CS, including but not limited to occult paroxysmal AF, paradoxical embolism through a PFO, or substenotic atherosclerosis
(Table 2). 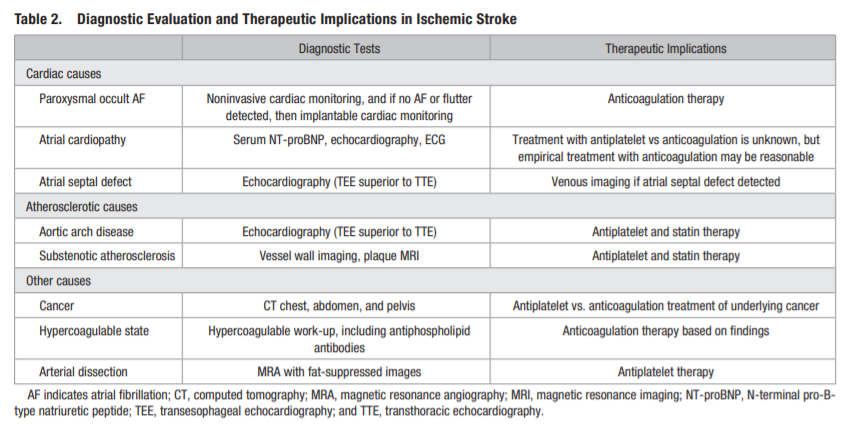 For a full discussion of the mechanisms of cryptogenic stroke, please PDF pages 532 – 535.

CS patients constitute a heterogeneous group of patients leading to therapeutic implications based on the potential mechanism. This approach, in addition to risk factor management
and lifestyle modifications, will lead to improved stroke prevention strategies in patients with CS. This will allow for targeted clinical trials to improve stroke prevention strategies in
this patient population.

This entry was posted in Neurology, Neuroradiology, Stroke. Bookmark the permalink.