In addition to today’s post, I went ahead and reviewed

Syphilis is a sexually transmitted infection caused by Treponema pallidum. A total of 13,106 cases of primary and secondary syphilis were reported in the United States in 2011 and the rate of infection has increased in subgroups, particularly men who have sex with men. The disease is mainly diagnosed through clinical findings and serologic testing. However, no single serologic test of syphilis is sufficient. Hence, the serologic diagnosis of syphilis requires the detection of 2 types of antibodies (nontreponemal antibodies and treponemal antibodies). The paradigm in syphilis testing has recently shifted in many centers to screen with a treponemal antibody test, reflexing to a nontreponemal test if the treponemal antibody test is positive. This reverse of the traditional algorithm may not be widely recognized among clinicians.

There are 2 different types of serologic tests classified based on the type of antigen the antibodies are directed against. Treponemal tests detect antibody to T pallidum proteins. Nontreponemal tests detect antibodies directed against lipoidal antigens, damaged host cells, and possibly from treponemes. Both tests are used to confirm the infection and determine whether the disease is active. Figure 1 (adapted from a World Health Organization bulletin in 2004) illustrates the timing of the different serologic responses.4 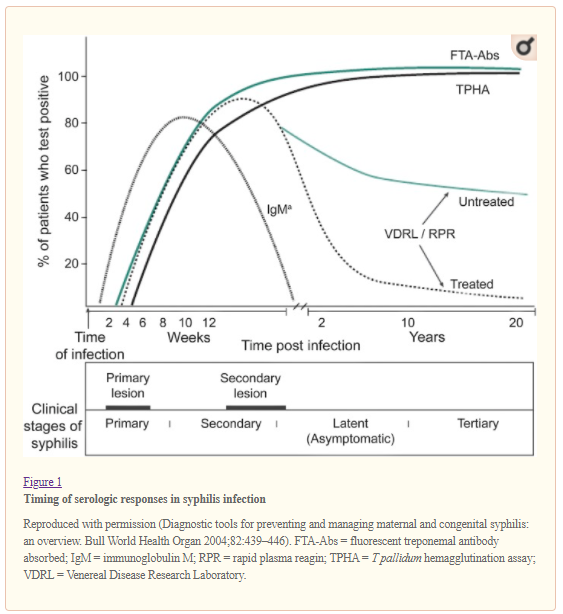 A reactive treponemal test most likely indicates infection by T pallidum but is not sufficient to determine disease activity and make treatment decisions (table 1). A reactive test can be seen in patients with a history of syphilis who has been treated. Consequently, it is important to determine if disease is active based on history, physical examination, and nontreponemal testing. 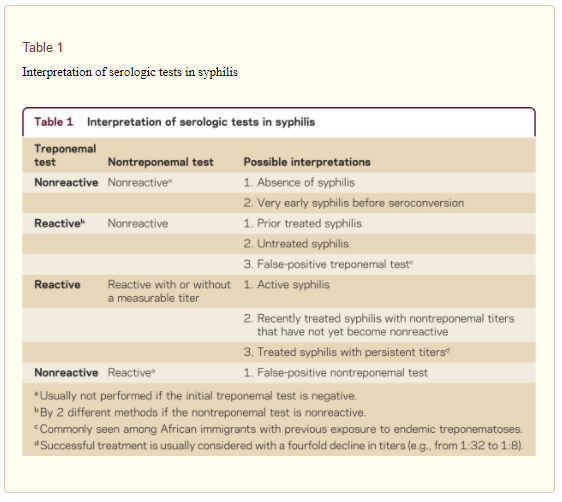 A negative treponemal test likely indicates the absence of syphilis and generally no further testing is required. However, recent infection cannot be ruled out and repeat testing should be considered in patients who have had a recent high-risk sexual exposure.11 In most cases of active syphilis, the nontreponemal test will be positive and a titer will be performed. A positive titer with a VDRL or RPR indicates active syphilis and follow-up serologic testing is performed to monitor treatment response. 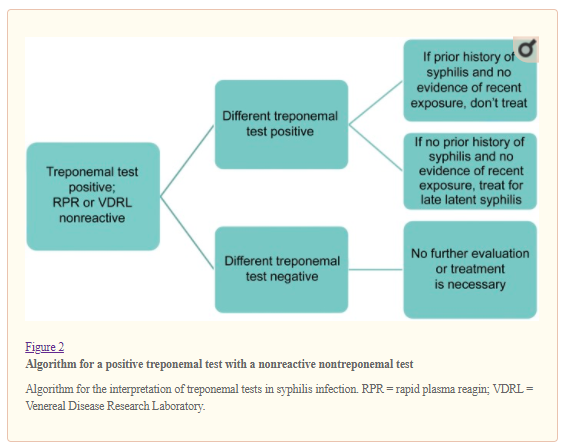 Neurosyphilis due to T pallidum can occur at any time after the initial infection. The clinical manifestations may vary widely and can include asymptomatic meningitis, ocular syphilis, otosyphilis, meningovascular syphilis, tabes dorsalis, and general paresis depending on the stage (table 2). The diagnosis of neurosyphilis is often initially suspected based on clinical findings coupled with positive serologic tests. Neurosyphilis is confirmed through lumbar puncture (LP). 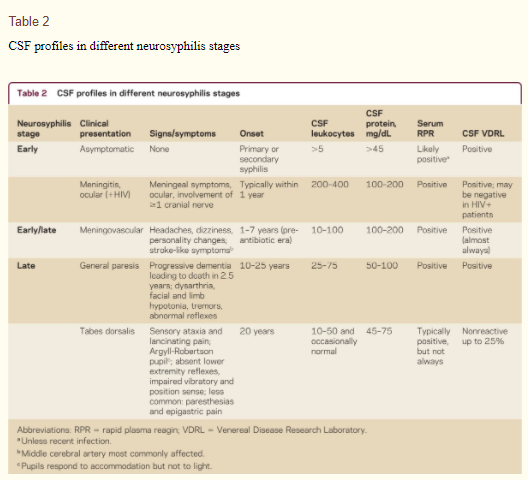 Abnormalities in the CSF consistent with disease include pleocytosis, often lymphocytic predominant, mild protein elevation, and a positive CSF VDRL. Even though a CSF VDRL was shown to be insensitive (positive only in 57% of the patients) in a study conducted by Hooshmand et al.,12 this study was called into question and thus, CSF VDRL test results are considered to be positive in the great majority of cases of neurosyphilis.13 CSF FTA-ABS can be used but is not specific. No single or combined CSF abnormalities make or rule out the diagnosis of neurosyphilis. Every result should be placed in context with the clinical scenario and the pretest probability.

The manifestations of neurosyphilis will depend on the stage of the disease (table 2). During early syphilis, neurologic involvement may be asymptomatic, although symptomatic meningitis can be seen. Ocular involvement and involvement of cranial nerves (II through VIII) is also well-documented. Other common findings include hearing loss, tinnitus, and facial weakness. After the first year of infection, meningovascular and stroke-like symptoms can develop. These symptoms include hemiparesis, hemiplegia, seizures, and aphasia.14 During the late stage, usually after 10 years, the classic manifestations of general paresis or tabes dorsalis can be seen. General paresis presents with changes in the affect, sensorium, and personality, hyperactive reflexes, slurred speech, pupillary disturbances, and optic atrophy tremors. Tabes dorsalis presents with lancinating pain to the lower extremities, ataxia, pupillary disturbances, bowel or urinary incontinence, a positive Romberg sign, peripheral neuropathy, and cranial nerve involvement.14 It is worthwhile to mention that a substantial clinical overlap can occur among the different stages.

Any abnormal neurologic finding without a clear etiology should be considered a potential manifestation of neurosyphilis. Confirmation of diagnosis is based on serologic testing. A serum treponemal test is obtained first. A negative test makes neurosyphilis unlikely. If the initial treponemal test is inconclusive, another treponemal-specific test should be obtained (figure 2). Following a positive serum treponemal test, a nontreponemal test should be ordered (e.g., RPR). A negative serum RPR makes neurosyphilis unlikely but does not exclude the diagnosis. If the RPR is positive and the clinical scenario is consistent with neurosyphilis, LP should be performed. A CSF examination is usually indicated with neurologic, otologic, or ophthalmologic manifestations, tertiary syphilis, clinical relapse, and serologic failure to appropriate therapy.3 Other indications such as in asymptomatic individuals with HIV coinfection or with nontreponemal titers >1:32 are not widely accepted.15 A positive CSF VDRL makes the diagnosis of neurosyphilis. If nonreactive, consider treatment in HIV-uninfected individuals if CSF leukocytes >5 cells/µL or protein >45 mg/dL with a reactive CSF FTA-ABS. A CSF FTA is frequently false-positive, but in the setting of a consistent clinical scenario, treatment should be given. If both CSF-VDRL and CSF-FTA are negative, neurosyphilis is unlikely, but evaluation should be performed based upon CSF leukocytes, protein, and clinical scenario. We suggest treatment if ultimately neuroinvasion cannot be ruled out.

Syphilis as part of the dementia workup

Recently, a number of outbreaks of primary and secondary syphilis have been seen in HIV-infected patients. The presence of syphilis increases the likelihood of acquisition of HIV and may be associated with increases in the HIV viral load and decreases in the CD4 count in coinfected patients.16 CNS invasion and ocular including posterior uveitis manifestations are more commonly present among patients infected with HIV. Secondary syphilis with symptomatic early neurosyphilis can mimic the signs and symptoms of acute HIV infection. Historically, HIV-infected persons also have had an increased risk for serious complications of syphilis including greater constitutional symptoms, organ injury, atypical rashes, secondary stage chancre, and multiple genital ulcers.17 Thus, there may be clinical overlap among different syphilis stages. It is likely that the risk of severe complications with syphilis is less in persons who are on successful HIV treatments with restored immune function. Yet there are no distinct or unique clinical manifestations of syphilis among HIV-infected individuals. Because of the high prevalence of syphilis among MSM and HIV-infected individuals, semiannual screening with a treponemal test is recommended (or even every 3 months in high-risk individuals).3,11 Similar to persons without HIV infection, CSF examination should be performed in patients with neurologic manifestations, auditory or ophthalmic signs or symptoms, active tertiary syphilis, or serologic treatment failure.18 Nontreponemal titers ≥1:32, CD4 <350 cells/µL, and syphilis duration greater than a year have been considered indications for LP as well. Because HIV infection itself can produce a mild mononuclear CSF pleocytosis (6–15 cells/mm3), specificity may be improved using CSF leukocyte cutoff of >20 leukocytes/mm3. Also, if the HIV-infected patient is on antiretroviral therapy (ART), has a CD4 count ≤200 cells/µL, or has an undetectable serum HIV viral load, the pleocytosis is more likely due to neurosyphilis rather than HIV.19 Symptomatic HIV coinfected individuals may have higher CSF protein levels compared to coinfected patients without symptoms.20 The workup starts with a serum treponemal test; if negative, neurosyphilis can be ruled out. If reactive, LP should be performed under the indications listed above. Confirmation of disease is done through a reactive CSF VDRL. One approach19 is if the CSF VDRL is not reactive consider treatment for neurosyphilis if CSF leukocytes are >20 cells/µL or between 6 and 20 cells/µL in patients on ART, with plasma HIV <50 copies/mL or CD4 ≤200 cells/µL. A CSF FTA-ABS should be obtained in patients with a nonreactive CSF VDRL and a CSF leukocyte count between 6 and 20 cells/µL in patients off of ART, plasma HIV >50 copies/mL, or CD4 >200 cells/µL. Treat for neurosyphilis if CSF FTA-ABS is reactive. However, we suggest considering treating any HIV+ patient with a pleocytosis or elevated protein on CSF examination, regardless of CSF serology results.

This entry was posted in Infectious Diseases, Laboratory Tests, Neurology. Bookmark the permalink.