About 20-25% (range 17-40%) of the 150 000 ischaemic strokes
in the United Kingdom each year affect posterior circulation
brain structures (including the brainstem, cerebellum, midbrain, thalamuses, and areas of temporal and occipital cortex), which are supplied by the vertebrobasilar arterial system.1 Early recognition of posterior circulation stroke or transient ischaemic attack (TIA) may prevent disability and save lives, but it remains more difficult to recognise and treat effectively than other stroke types. Delayed or incorrect diagnosis may have devastating consequences, including potentially preventable death or severe disability, if acute treatment or secondary prevention is delayed.2

What is posterior circulation ischaemicv stroke?

Posterior circulation ischaemic stroke is a clinical syndrome
associated with ischaemia related to stenosis, in situ thrombosis,
or embolic occlusion of the posterior circulation arteries—the
vertebral arteries in the neck, the intracranial vertebral, basilar,
and posterior cerebral arteries, and their branches (fig 1⇓).
Common sites of occlusion cause characteristic clinical patterns
and syndromes (figs 1 and 2). 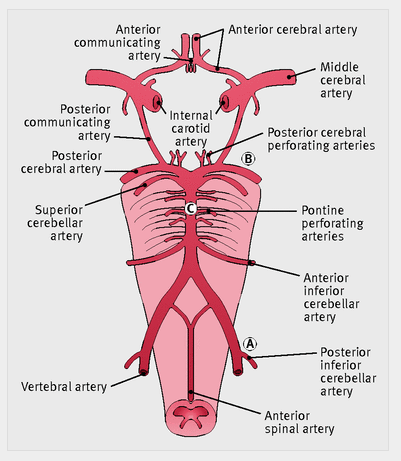 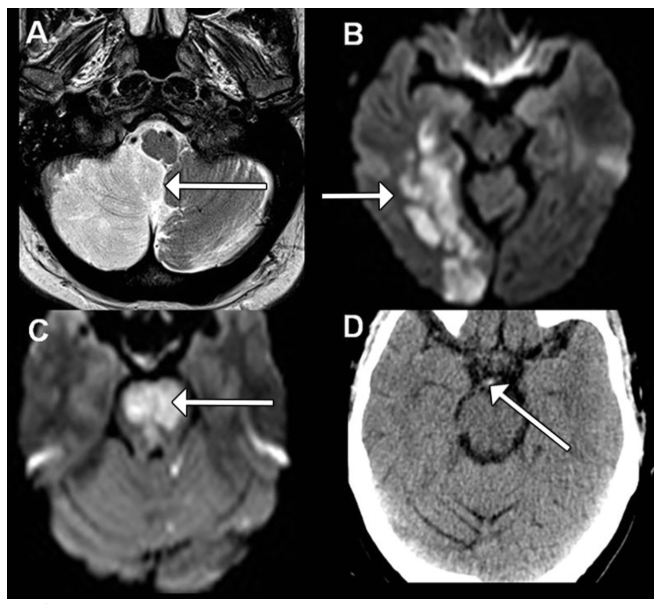 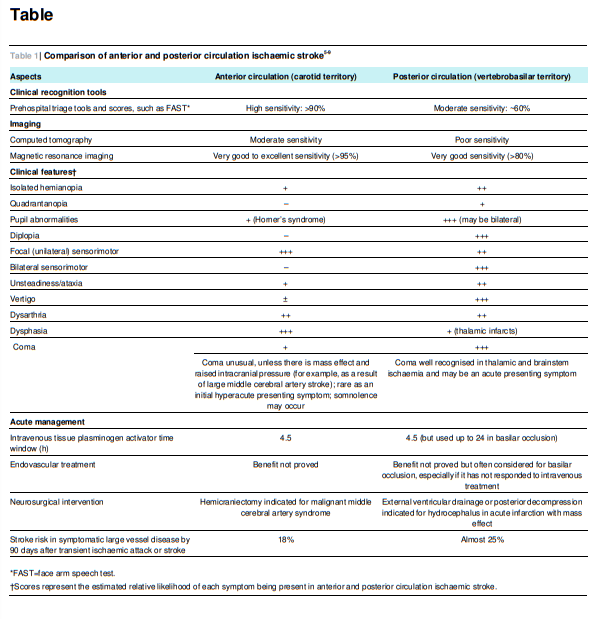 The most common causes of posterior circulation stroke are
occlusion or embolism from large artery vertebrobasilar
atherosclerosis or dissection, and embolism from the heart.11 12
In a large US hospital registry study of 407 patients with
posterior circulation stroke, embolism was the most common
mechanism (40% of patients); large artery occlusive lesions
caused haemodynamic brain ischaemia in 32%; and the
remainder of strokes were attributed to in situ small vessel
occlusion, other identified mechanisms, or unknown causes.12
Of the strokes attributed to embolism 24% had cardiac source,
14% were caused by to artery-to-artery embolism, and 2% had
multiple sources of potential embolism.12

Recent population based and hospital observational studies have shown a threefold increased risk of stroke after posterior
circulation TIA or minor stroke in patients with symptomatic
vertebrobasilar stenosis than in those without stenosis.6 13 14

Similar to other forms of cerebrovascular and cardiovascular
disease, the risk factors for posterior circulation strokes include
hypertension, smoking, hypercholesterolaemia, atrial fibrillation, and coronary artery disease.

What are the clinical symptoms and signs of posterior circulation ischaemia?

Posterior circulation ischaemia can be challenging to recognise,
particularly in patients with a TIA, which may have resolved
by the time of presentation. However, there are some
characteristic clinical patterns (box 1).

Urgently refer all patients with acute vertigo and any other focal neurological symptoms for specialist assessment.

TIAs, often with minor symptoms such as dysarthria or diplopia, may precede devastating basilar stroke syndromes, so they need to be promptly recognised and patients referred for specialist evaluation.20 21 This can be a real challenge because some of these attacks are very brief, may seem minor, and do not fulfil traditional TIA criteria (“transient neurological attacks”).4 17

Transient brainstem symptoms that do not fully meet the traditional definition of TIA (such as isolated vertigo) have also recently been associated with the risk of subsequent stroke in the posterior circulation, although they may also be due to alternative non-ischaemic disease.4

Stroke chameleons are disorders that look like other disorders
but are actually stroke syndromes. Bilateral thalamic ischaemia
is such a disorder and may cause reduced consciousness level
or a global amnesic syndrome; bilateral occipital stroke may
present as confusion or delirium; and infarcts limited to the
medial vermis in medial posterior inferior cerebellar artery
(PICA) territory usually cause a vertiginous syndrome that
resembles peripheral vestibulopathy.2 19 Rarely acute brainstem ischaemia can cause bilateral rhythmic leg movements that can resemble fasciculations or convulsive seizures.22

Which clinical syndromes are caused by  posterior circulation stroke? 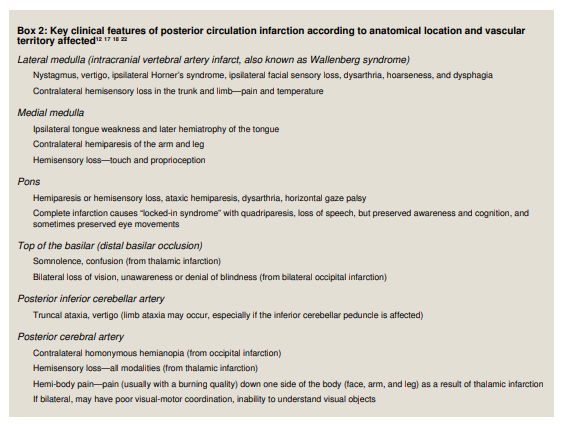 The diagnosis of posterior circulation ischaemic stroke is based
on rapidly developing clinical signs of focal (or occasionally
global) disturbance of cerebral function, with no apparent cause
other than that of vascular origin.24

All cases of suspected stroke require urgent brain imaging with
CT or magnetic resonance imaging (MRI) to exclude haemorrhage. If a patient is a candidate for thrombolysis therapy, brain and vessel imaging with a technique such as CT
angiography is essential to identify basilar artery occlusion. It
should be performed without delay, because minimising the time between stroke onset and the start of thrombolysis is associated with a good outcome.

Acute phase CT imaging may allow identification of large vessel
occlusion or dissection. In many centres CT and CT angiography
is more readily available in the acute phase than MRI, and is
helpful if MRI is contraindicated or unavailable. On the basis
of a patient series that compared each modality to digital
subtraction angiography of all intracranial vessel territories, CT
angiography and time-of-flight magnetic resonance angiography had high sensitivity for identifying vessel occlusion—100% and 87% sensitivity, respectively.26

MRI with diffusion weighted imaging is the brain imaging modality of choice for suspected posterior circulation stroke,
although it is difficult to access at most UK hospitals and in
many other countries, especially in the hyperacute phase.

MRI is far more sensitive than CT in the diagnosis of acute
ischaemic stroke for all vascular territories, with study results
indicating 80-95% sensitivity in the first 24 hours when diffusion weighted imaging is used, versus 16% sensitivity with CT.27 28

Current international guidelines recommend MRI for assessing
TIA, including those in the posterior circulation. It can help
diagnose disorders that mimic stroke and TIA, can help verify
vascular territory, and diffusion weighted imaging abnormalities
independently predict early stroke risk after TIA.29 30 MRI
provides the greatest diagnostic yield when performed as soon
as possible (certainly within a few days) of symptom onset,
especially in minor stroke or TIA.31 To help differentiate stroke
from rare mimic disorders, such as encephalitis, further
investigation with lumbar puncture (if no clinical or radiological
contraindications are present) may be necessary if fever or
atypical imaging features are identified.

This entry was posted in Neurology. Bookmark the permalink.