In this post I link to and excerpt from the article, Quality Improvement Initiative to Increase the Use of Nasogastric Hydration in Infants With Bronchiolitis [PubMed Abstract] [Full Text HTML] [Full Text PDF]. Hosp Pedi. 2017 Aug;7(8):436-443.

I also link to and excerpt the Supplemental Information from Resource (2) below.

We used Plan-Do-Study-Act cycles to increase the use of NG hydration in eligible children.

Two hundred and ninety-three children who were hospitalized with bronchiolitis needed supplemental hydration during the QI initiative (January 2016–April 2016). Ninety-one children were candidates for NG hydration, and 53 (58%) received NG hydration. The rates of NG hydration increased from a baseline of 0% pre-QI bronchiolitis season (January 2015–April 2015) to 58% during the initiative. There was no aspiration and no accidental placement of the NG tube into a child’s airway. Nine patients (17%) in the NG group had a progression of disease requiring nil per os status, and 6 of these were transferred to the PICU whereas none of those in the IV group were transferred to the PICU. Post-QI initiative, the majority of nurses (63%) and physicians (95%) stated that they are more likely to consider NG hydration in children with bronchiolitis.

We successfully increased the rates of NG hydration in eligible children with bronchiolitis by using educational and system-based interventions.

Studies comparing IV and NG hydration in children with bronchiolitis have shown NG hydration to be well tolerated, safe, and have no increased risk of complications when compared with IV hydration.2,8,9

Breast milk or formula can be offered via NG tube rather than the less nutritious fluids that are commonly given via IV. Providing adequate nutrition to children who are ill is important and can influence the outcomes.10–13 Accordingly, we sought to increase the use of NG hydration in eligible children who are admitted with bronchiolitis.

The study team included 3 pediatric hospitalists, a chief resident, and 3 pediatric residents. Key drivers were identified by discussions with stakeholders at meetings and analysis of information obtained by stakeholder surveys (Fig 1). We also discussed with stakeholders the patient eligibility criteria for NG hydration based on the studies by Oakley et al2 and modified the criteria based on stakeholder feedback. We performed 3 Plan-Do-Study-Act (PDSA) cycles with a 3-week period at the end of the last cycle to evaluate sustainability without further intervention. 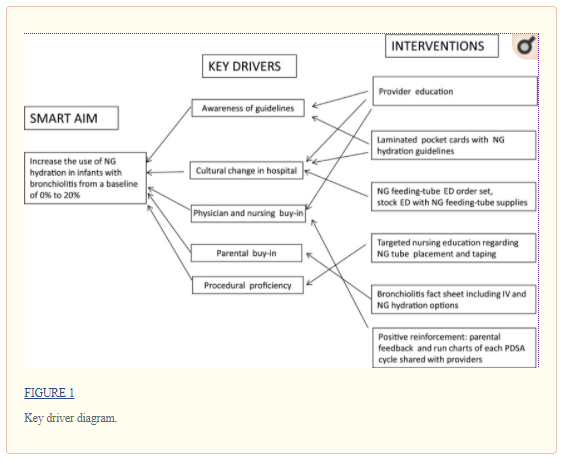 Educational interventions were conducted on the basis of information gathered from aforementioned meetings and survey data. Study team members attended PEM and hospitalist division meetings, resident conferences, and nursing staff meetings to provide initial education, and information was sent via e-mail to providers who did not attend the meetings. Information was further disseminated by posters, which were placed in key locations in the hospital, and pocket cards (Supplemental Figs 4 and 5). These included information about NG hydration, NG placement protocols, parental talking points, and indications of eligibility for NG hydration. To supplement discussions with providers, parents were given a parental information sheet that was created in conjunction with the hospital’s family resource center (Supplemental Fig 6). Important feedback regarding accidental NG tube dislodgement was received during the first 2 weeks of the initiative. To address this, posters depicting the proper NG tube-taping technique were created, presented to nursing staff, and placed in key locations. 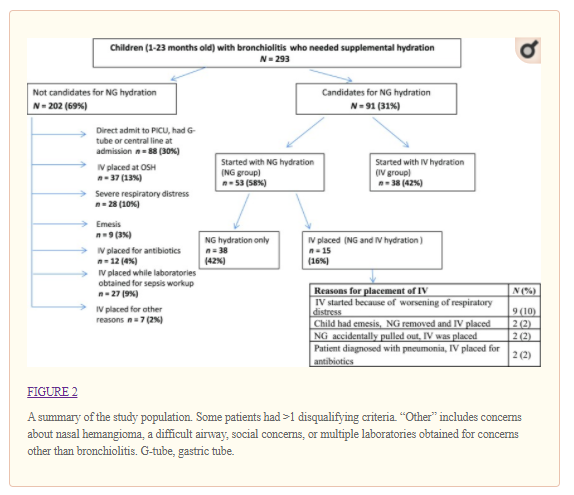 Parental feedback was obtained from the parents of children who received hydration via IV, NG, or both during weeks 4 to 12 of the initiative. 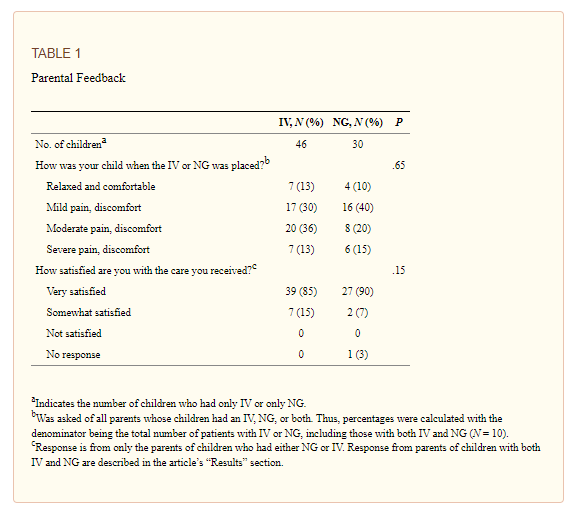 Our primary outcome measure was the rate of NG hydration in eligible children who were admitted with bronchiolitis and dehydration. The balancing measure was the rate of complications in children with NG versus IV hydration, which was assessed by chart reviews. Complications were defined as outcomes that potentially could be attributed to NG hydration, such as aspiration, epistaxis, accidental placement of the NG tube in the airway, or worsening of disease severity. Change in hospital culture regarding NG hydration after the QI initiative was assessed by the post-QI survey described above.

We compared the characteristics of children who initially received IV or NG hydration (Table 2). The NG group included all the children who started out with NG tubes, some of whom later required IVs. Children in the NG group were significantly younger, and a greater proportion was white when compared with those in the IV group. The groups had no significant differences in sex, presenting symptoms and examinations, viruses detected, day of illness at presentation, discharge diagnosis, total charges, or LOS. 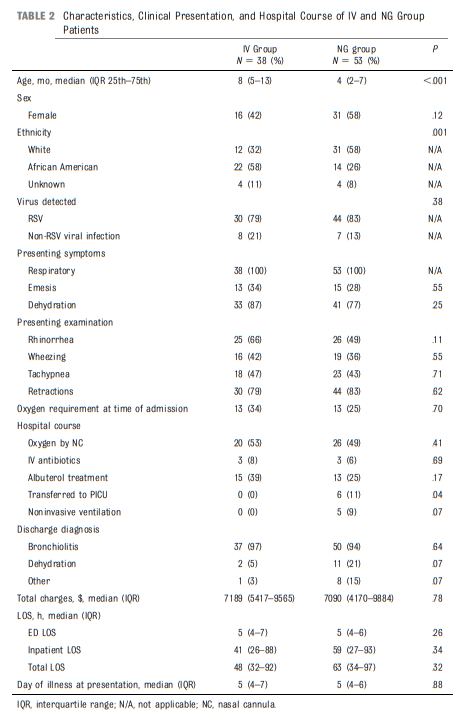 Our QI interventions were successful in increasing overall rates of NG hydration in eligible children from zero at baseline to 58%, which was well beyond our goal of 20%. In addition, our survey results show that the educational interventions were successful in increasing the knowledge of providers regarding NG hydration options in the AAP and hospital bronchiolitis guidelines.

There was no aspiration noted in any patient with an NG or IV, nor was there any accidental placement of an NG tube into the airway, which is similar to other studies comparing IV and NG hydration. A large, randomized controlled trial did not show any significant difference in rates of ICU admission, need for ventilator support, duration of oxygen therapy, or LOS between infants receiving IV versus NG hydration.2 A retrospective cohort study of infants 0 to 2 months old with bronchiolitis who received IV or NG hydration also did not show any significant difference in adverse events (such as desaturations, apnea, or bradycardia) between the 2 groups.9 The same study showed a positive association between IV hydration with ICU admissions and the use of ventilator support.9 In our study, 15 patients in the NG group subsequently needed IVs. Of these, 6 were transferred to the PICU, whereas none of the patients in the IV group were transferred to the PICU. Given the younger mean age and earlier mean day of illness of this subgroup, their transfers were probably caused by the usual worsening of RSV disease at day 4 to 5 of the illness rather than the result of any sequelae from NG hydration (such as aspiration). Chart reviews of these children also supported the worsening of respiratory distress being related to natural disease progression. However, possible complications of NG cannot be excluded as a contributing factor. We will evaluate this further during the next bronchiolitis season and track complications including PICU transfers in patients with IV versus NG hydration. On the basis of our results, it is important to discuss the possibility of IV in case of worsening of the disease, especially with families of younger children who are earlier in their disease course.