In addition to the resource below, for an excellent brief review, please see The Curbsiders‘ [Link is to the full episode list] episode #300 Celiac Disease with Dr. Amy Oxentenko, OCTOBER 18, 2021. By MATTHEW WATTO, MD.

In this post, I link to and excerpt from the 2019 European Society for the Study of Coeliac Disease (ESsCD) guideline for coeliac disease and other gluten-related disorders [PubMed Abstract] [Full-Full Text HTML] [Full-Text PDF]. United European Gastroenterol J. 2019 Jun; 7(5): 583–613.

All that follows is from the 2019 guideline.

This guideline presents recommendations for the management of coeliac disease (CD) and other gluten-related disorders both in adults and children. There has been a substantial increase in the prevalence of CD over the last 50 years and many patients remain undiagnosed. Diagnostic testing, including serology and biopsy, should be performed on a gluten-containing diet. The diagnosis of CD is based on a combination of clinical, serological and histopathological data. In a group of children the diagnosis may be made without biopsy if strict criteria are available. The treatment for CD is primarily a gluten-free diet (GFD), which requires significant patient education, motivation and follow-up. Slow-responsiveness occurs frequently, particularly in those diagnosed in adulthood. Persistent or recurring symptoms necessitate a review of the original diagnosis, exclude alternative diagnoses, confirm dietary adherence (dietary review and serology) and follow-up biopsy. In addition, evaluation to exclude complications of CD, such as refractory CD or lymphoma, should be performed. The guideline also deals with other gluten-related disorders, such as dermatitis herpetiformis, which is a cutaneous manifestation of CD characterized by granular IgA deposits in the dermal papillae. The skin lesions clear with gluten withdrawal. Also, less well-defined conditions such as non-coeliac gluten sensitivity (NCGS) and gluten-sensitive neurological manifestations, such as ataxia, have been addressed. Newer therapeutic modalities for CD are being studied in clinical trials but are not yet approved for use in practice. 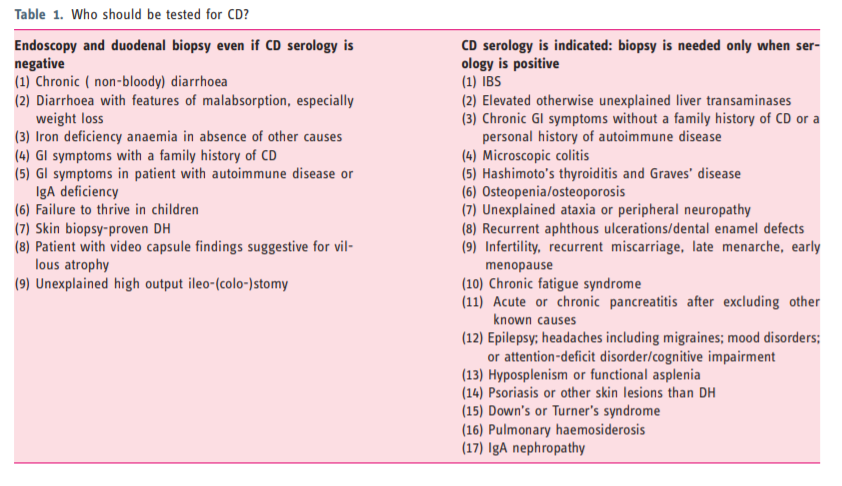 2.2. The role of serology in CD diagnosis
2.2.1. IgA-anti-gliadin antibodies (AGA). Several antibody
tests have been developed to detect CD. IgA-AGA has
been used for decades and is reasonably accurate (sensitivity 85% and specificity 90%) when there is a high
pre-test prevalence of CD but performs rather poorly in
the general population setting.44,45
Nowadays AGA-testing has been replaced by more
accurate serological assays largely because of poor
specificity.46
2.2.2. Tissue transglutaminase (TG2) and endomysium (EMA)
testing. It was with the advent of autoantibodies, first
directed against reticulin, then EMA and finally TG2
antibodies, that the truly coeliac-specific testing was
developed. The identification of TG2 as the target antigen for IgA-EMA antibodies was a major breakthrough.47 The sensitivity and also specificity of TG2
for untreated CD is about 95%.46 The higher the titre
of anti-TG2, the greater is the likelihood of a true positive result.

The test is based on an enzyme-linked immunosorbent assay (ELISA) and less commonly on radioimmunoassay (RIA).45,46 ELISA-TG2 assays demonstrated high sensitivity and specificity with lower cost and greater reproducibility than RIA. Although performance characteristics of assays vary, overall TG2 testing is reliable and inexpensive. For these reasons it has become the most common test for coeliac diagnosis and monitoring.45

The anti-TG2 test is the most sensitive test for CD,
whereas IgA-EMA is the most specific test.45 Therefore,
serological testing for CD relies on anti-TG2 as the first
step. IgA-EMA may be used as a confirmatory test,
particularly when TG2 has a low titre (<2 times the
upper normal limit (ULN)), although in these patients
biopsy is usually indicated.29

2.3. IgA deficiency
This affects 2–3% of patients with CD.51 Total IgA
levels needs to be measured concurrently with serology
testing to determine whether IgA levels are sufficient.
Incorporating IgG-based testing into the serology panel
would be the next step in case of documented IgA-deficiency. IgG-DGPs and/or IgG-TG2 would then be the
preferred test.49 Furthermore, finding of IgA-deficiency
should prompt evaluation for other diseases that may
cause villus atrophy (VA), such as giardiasis, smallbowel bacterial overgrowth (SIBO) or common variable immunodeficiency (CVID).52 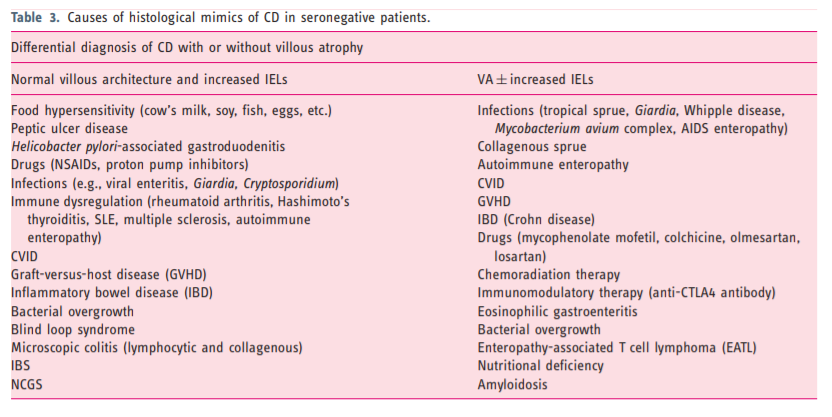 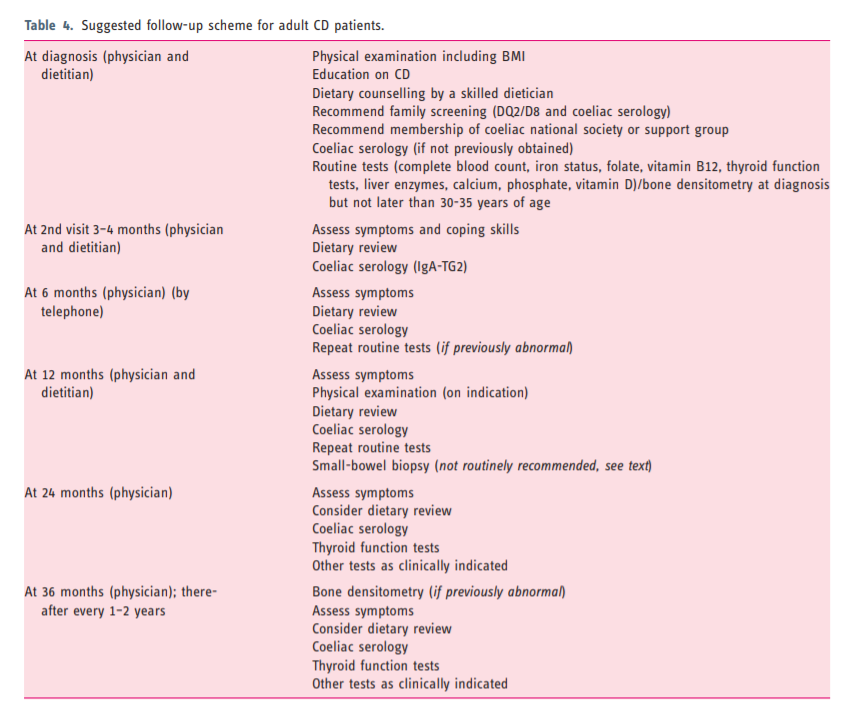 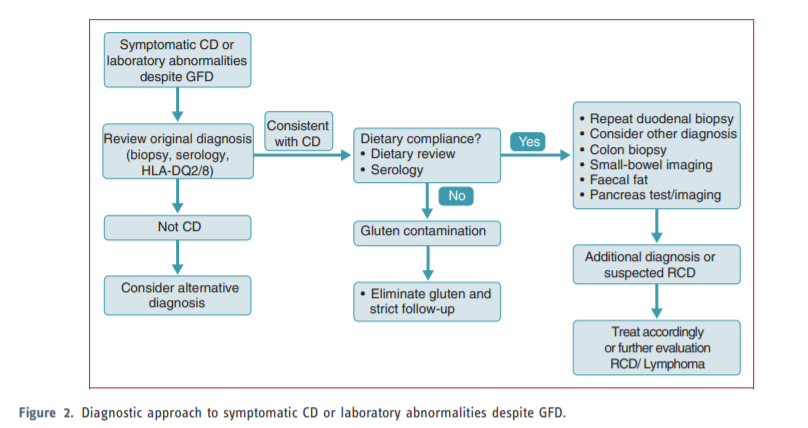 This entry was posted in Guidelines. Bookmark the permalink.