And also review BLUE-protocol and FALLS-protocol: two applications of lung ultrasound in the critically ill. (Ref 2)

The following are some excerpts from this article (Ref 1):

[Chest pain, dyspnea, and hypotension can be caused by a number of life-threatening problems that cannot be readily determined  by history or clinical examination] Therefore, it is prudent for acute care physicians to perform a symptom- or sign-based MOPOCUS for any combination of those three indications.

The sequence of MOPOCUS scanning
There is no universally accepted sequence of scanning
using MOPOCUS. In this review, we advocate that the
physician begin by assessing the lung and inferior vena
cava (IVC), with the abdominal aorta, followed by the
heart (including the thoracic aorta in case of chest pain)
and, lastly, the abdomen for evaluation of the source of
intra-abdominal sepsis or blood loss (Fig. 1). Although
all the organs can be scanned with either an abdominal
convex (2–6 MHz) or cardiac sector (2–4 MHz) transducer,
we can change the transducers for a detailed
evaluation if time permits. . . . 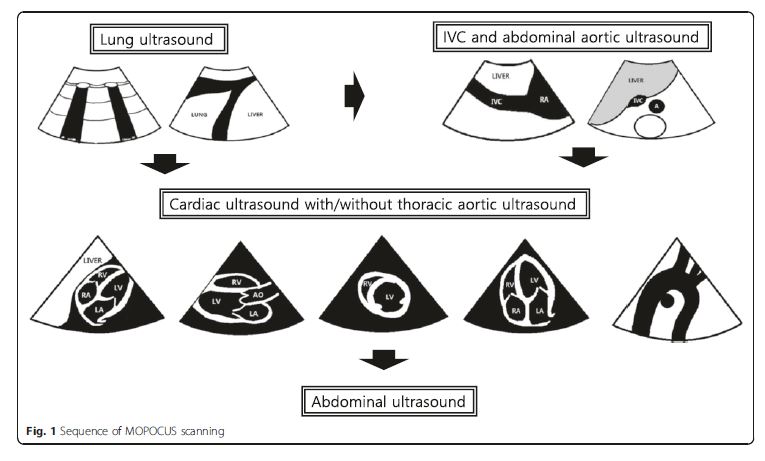 In this review, we formulated these MOPOCUS findings into several structured algorithmic approaches. While these are not exhaustive, the underlying pathophysiology and hemodynamics can be systematically categorized and subsequently narrowed to those that are
critical, commonly encountered, and warrant timely diagnosis
and intervention. The legends used in the algorithms
(Fig. 2, 7, 8, 12, 14, 16, and 19) are detailed in Fig. 2.

Lung ultrasound
The first and most important ultrasound sign to
recognize in the lung is the “bat sign.” (Ref 3) The bat sign is essential for the accurate identification of the pleural line.
Conceptually, the lung should be interrogated in three
zones: the chest wall, pleural line, and subpleural space.
Sonographic findings and their definitions at each part
are summarized in Table 1. 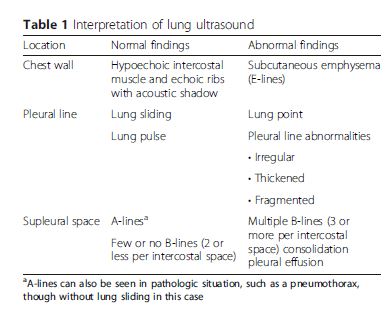 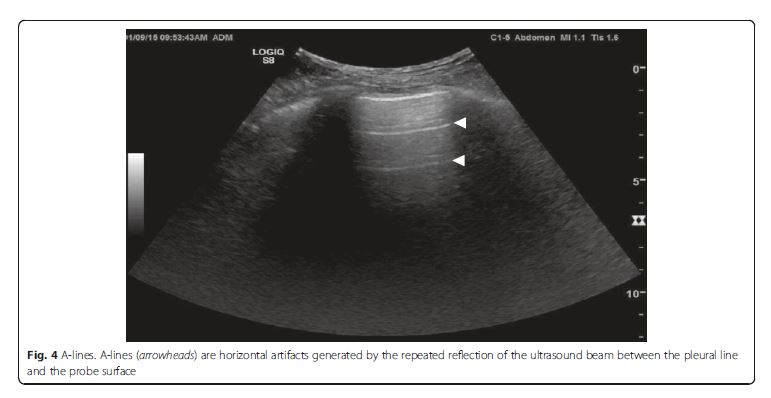 A normal lung pattern in patients with shock warrants
two immediate follow-up actions: the first is to rule out
tension pneumothorax and, secondly, to initiate fluid resuscitation based on the Fluid Administration Limited
by Lung Sonography (FALLS) protocol [21–23]. . . . Apart from tension pneumothorax, a caval and cardiac ultrasound following lung examination will help define the remaining causes of obstructive shock.

The last pearl to note is that chest pain in patients
with a normal lung pattern is mostly visceral in nature.
The physician should focus the search for the etiology
using cardiac and aortic ultrasound.

Pleural diseases
Pneumothorax
Patients with pneumothorax present with shortness of
breath and pleuritic chest pain. The absence of lung sliding
does not have adequate specificity to rule in the
disease, as this absence can be observed in severe emphysema,
adult respiratory distress syndrome (ARDS),
and atelectasis [25, 26]. The lung point is highly specific
for and thus rules in pneumothorax (Fig. 5) [27]. The
presence of lung sliding, B-line, or lung pulse rules out
pneumothorax, as all of them require the apposition of
the parietal and visceral pleura [21]. 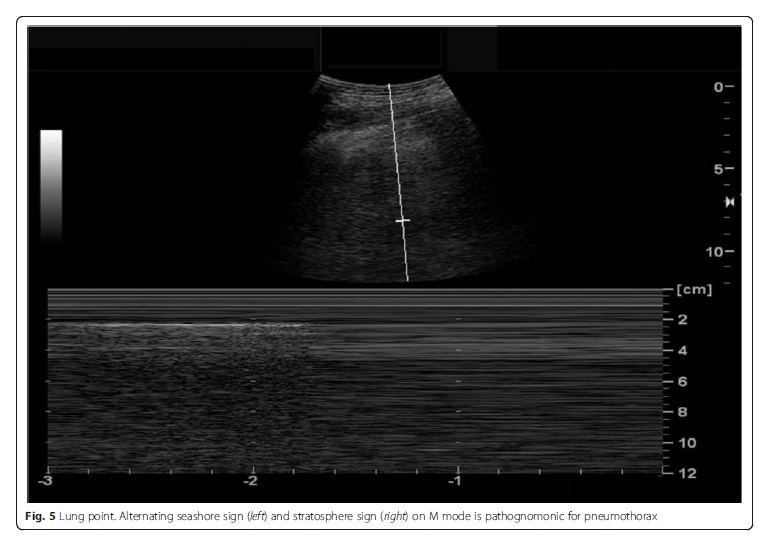 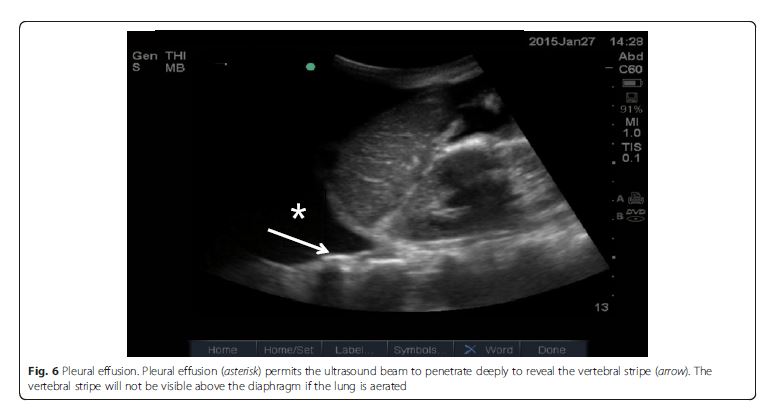 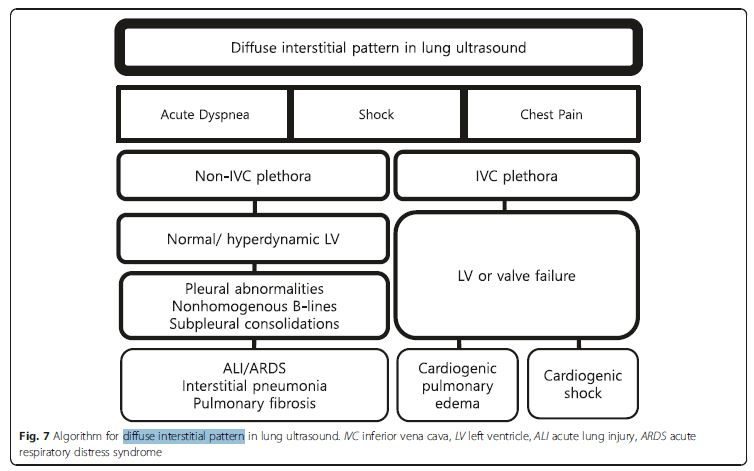 In diffuse IS, the posterior chest is not evaluated—only the eight anterolateral regions are examined [21]. Four regions per side (two anterior and two lateral) are evaluated. The anterior chest wall was delineated from the sternum to the anterior axillary line and was subdivided into upper and lower halves. The
lateral zone was delineated from the anterior to the posterior
axillary line and also was subdivided into upper and lower halves.

Diffuse IS is defined as the presence of multiple diffuse
bilateral B-lines with at least two positive scans on each
side of the thorax (Fig. 9) [33]. Causes of diffuse IS include
pulmonary edema of various causes, diffuse parenchymal
lung disease (pulmonary fibrosis), or interstitial
pneumonia [21]. The presence of diffuse bilateral B-lines
has an 86–93 % sensitivity and 93–98 % specificity in
the diagnosis of IS [33, 34]. Note that diffuse IS alone
does not rule in any specific etiology: it could be
detected in many dyspneic patients, as well as those
presenting with shock and/or chest pain. . . . The presence of diffuse interstitial pattern associated
to a normal heart indicates a non-cardiac cause of
pulmonary edema, as acute lung injury (ALI)/ARDS, interstitial pneumonia, and diffuse parenchymal lung disease
(pulmonary fibrosis, in a chronic setting). Unlike cardiogenic
pulmonary edema, the associated lung findings
for non-cardiac causes include pleural line abnormalities,
non-homogenous distribution of B-lines, and subpleural
echo-poor area (or consolidation) [21]. ARDS, in addition,
has findings of spared area, loss, or reduced lung sliding
and various consolidations [37].

If diffuse IS accompanies shock, the presumptive
shock physiology is likely cardiogenic. The physician
should try to elucidate the cause using IVC and cardiac
ultrasound. 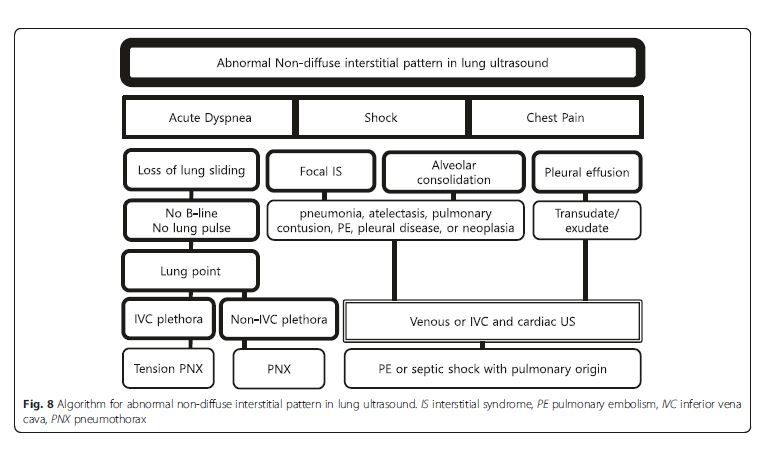 Focal (localized) interstitial sonographic pattern is seen in a variety of pathologies of pulmonary origin, such as pneumonia, atelectasis, pulmonary contusion, pulmonary infarction, pleural disease, or neoplasia[21]. Note that the main difference between diffuse and focal interstitial patterns on ultrasound is that
the lung findings on the latter are asymmetrical. In itself, focal IS is not specific for an etiology: physicians need to integrate it in the entire clinical context, including other sonographic findings. 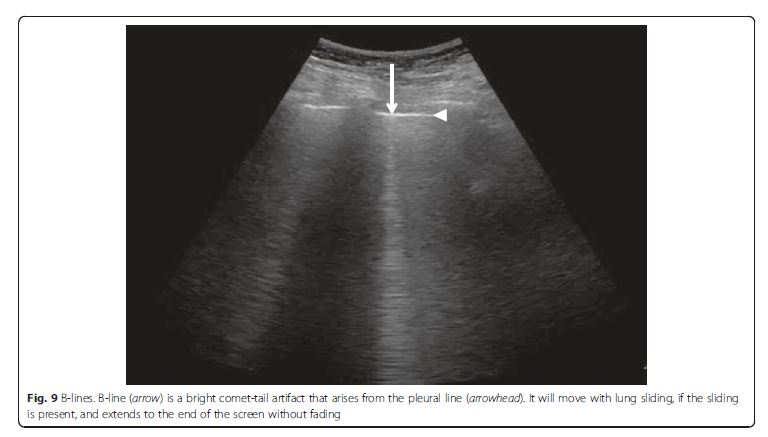 Alveolar consolidation
The consolidated region of the lung is visualized as an echo-poor or tissue-like pattern, depending on the extent of aeration loss and fluid predominance (Fig. 10). A dynamic air bronchogram (Fig. 11) showing inspiratory centrifugal movement is a highly specific sign of pneumonia and is the most important sign to differentiate it from other causes of consolidation (atelectasis, pulmonar infarction, lung cancer) [38]. The alveolar consolidation pattern is usually associated with dyspnea or
pleuritic chest pain [39]. In patients with hemodynamic  instability, additional findings in MOPOCUS are needed
to determine if the alveolar consolidation pattern results
from pneumonia (septic shock) or PE. 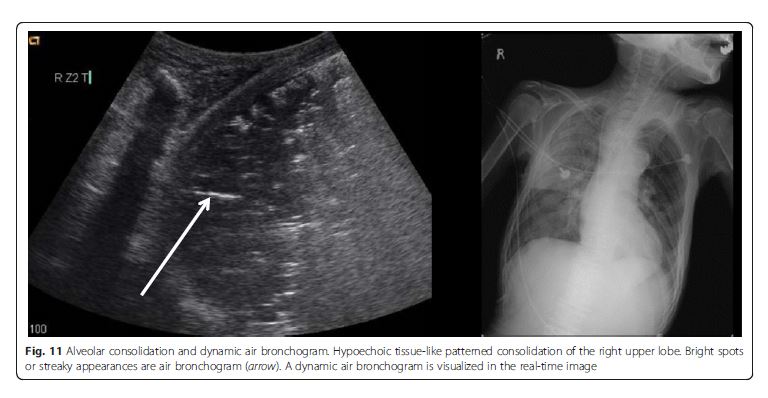 Cardiac ultrasound
With information integrated from the preceding lung
and IVC assessment, cardiac ultrasound can readily define the etiology of acute dyspnea and shock. It also
plays a pivotal role in the case of visceral chest pain.
This section describes the utility of cardiac ultrasound in
the context of MOPOCUS for dyspnea, chest pain, and
shock in turn.

Acute dyspnea
Patient with diffuse interstitial pattern should have a focused
cardiac ultrasound evaluation to determine the
etiology, such as acute cardiogenic pulmonary edema,
ARDS, or pulmonary fibrosis (Fig. 14). If LV systolic
function is impaired, the most likely cause is cardiogenic
pulmonary edema [2, 5, 9]. In the absence of gross signs
of preexisting cardiac disease (i.e., LV enlargement or
hypertrophy, right ventricular (RV) hypertrophy, or atrial
dilation) (Fig. 15), 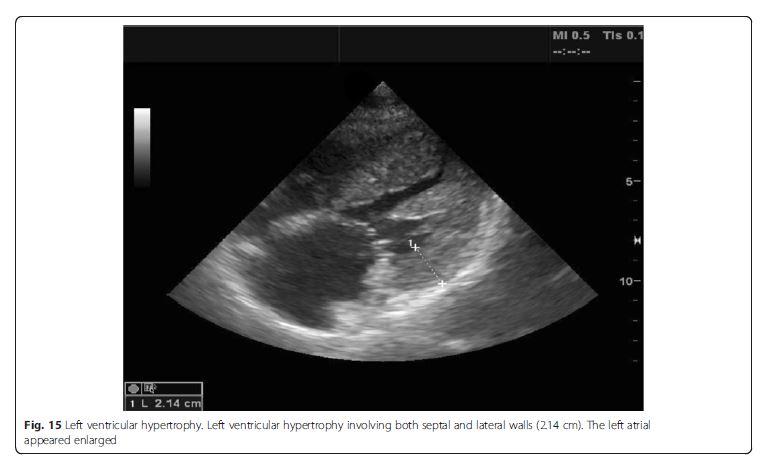 the differentials can be narrowed down to acute processes, such as acute myocardial infarction or myocarditis [48]. Signs of preexisting cardiacdisease are usually apparent in acute decompensation. If LV systolic function is normal, non-cardiogenic origin such as ARDS, interstitial pneumonia, or pulmonary fibrosis should be suspected, though cardiac pathologies such as significant mitral regurgitation (MR) or diastolic dysfunction are possible [2]. Significant valvulopathies
can lead to cardiogenic pulmonary edema. The first task in valve evaluation is to exclude acute severe aortic or MR. Subsequently, the possibility of decompensated chronic severe aortic or MR/stenosis should be entertained [49]. Full evaluation with a comprehensive echocardiography is recommended for the quantitative analysis.
A non-diffuse interstitial pattern typically points to a
pulmonary origin as a cause of dyspnea, in which lung
ultrasound alone is usually sufficient.

A non-diffuse interstitial pattern typically points to a
pulmonary origin as a cause of dyspnea, in which lung
ultrasound alone is usually sufficient.

Chest pain
Pleural (pleuritic) chest pain results from lung pathologies
such as pneumonia, pulmonary infarction, exudative
pleural effusion, or pneumothorax (Fig. 16). These are
readily diagnosed by lung ultrasound. On the other hand,
visceral chest pain should prompt evaluation for acute
coronary syndrome (ACS), pericarditis, or aortic dissection
[50]. Following an initial electrocardiography (ECG),
the presence of pericardial effusion, RV enlargement, or
regional wall motion abnormality (RWMA) compatible to
coronary artery distribution should be evaluated on cardiac
ultrasound. Attempt should be made to visualize the
thoracic aorta, starting from the aortic root, arch, and
parts of the descending thoracic aorta behind the heart
(Fig. 17). The abdominal aorta needs to be scanned when a
dissection flap is visualized in the thorax above (Fig. 18).
Note the multi-detector computerized tomography (CT) is
the current gold standard in the evaluation for an aortic dissection.
While the presence of RWMA in patients with ongoing
chest pain without the previous history prompts
appropriate management including percutaneous coronary
intervention, absence of RWMA in patients with ongoing
chest pain excludes a significant ACS [51]. Pericarditis is
not always distinguished by clinical feature and ECG [52].
Cardiac ultrasound can be used as an adjunct, with supporting
features such as the presence of a pericardial effusion
and absence of RWMA. A flap in the aorta or a crescent
shape of the aortic wall (direct sign) and aortic regurgitation,
ascending aortic dilation, or pericardial effusion (indirect
signs) suggest aortic dissection. They showed 98 % specificity
for identifying patients with suspected type A aortic dissection
combining aortic dissection risk score [53, 54]. 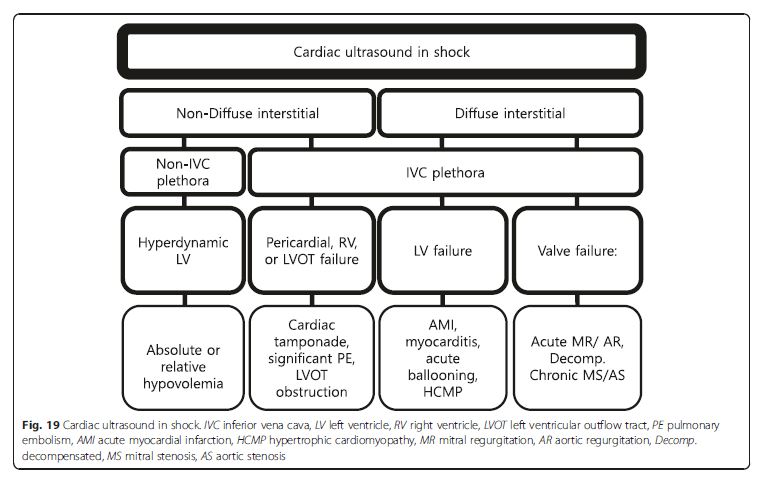 LV outflow tract failure   Dynamic LV outflow tract obstruction causing obstructive shock can be easily missed
if cardiac ultrasound is not performed. Diagnosis of this
is critical for the patient because the hemodynamic
management is opposite to that of cardiogenic shock. Cardiac ultrasound generally shows hyperdynamic ventricular function with near complete or partial obliteration of the ventricular cavities. Additional sonographic signs include systolic anterior motion of the mitral valve, high ejection flow velocity in the LV outflow tract, and MR in the color Doppler image. LV outflow tract obstruction has been reported with LV hypertrophy, profound dehydration, excessive sympathetic stimulation,
apical ballooning syndrome (i.e., takotsubo cardiomyopathy,
Fig. 24), and acute myocardial infarction [65, 66]. Apical ballooning syndrome is reported to cause LV outflow
tract obstruction in up to 25 % [67]. See pp 14 and 15.

LV failure MI with LV failure remains the most common
cause of cardiogenic shock. The SHOCK trial registry
demonstrated that predominant LV failure was the
most common cause of cardiogenic shock, occurring in
78.5 % of patients. Patients with predominant LV failure
complicating acute MI were more likely to have an anterior
MI. Inferior MI was less often associated with LV
failure but associated with a greater risk of mechanical
complications [69]. Therefore, the presence of an extensive
anterior MI or mechanical complications (severe
MR due to papillary muscle rupture, ventricular septal
defect, tamponade secondary to cardiac rupture, etc.) is
a major concern in this setting [70]. In these settings,
cardiac ultrasound is the investigation of choice. The
clinical presentations of myopericarditis, apical ballooning
syndrome, and hypertrophic cardiomyopathy can be
similar to ACS and even cardiogenic shock. Sonographic
Fig. 24 Apical ballooning syndrome. Severe hypokinesia of mid-ventricle sparing the basal segments (arrow). This is better appreciated during real-time scanning. See pp 16 and 17.

Valve failure Valvular pathologies also are potential causes
of cardiogenic shock (Fig. 25). The life-threatening acute severe
regurgitation resulting from infectious endocarditis,
acute myocardial infarction, or aortic dissection should be
placed at the top of the list to be screened, as it prompts an
emergent operation [70, 72]. Then hemodynamically compromised decompensation of preexisting aortic or mitral
stenosis should be identified. In a patient suspected with aortic dissection complicating shock, not only severe acute aortic regurgitation but also pericardial effusion causing tamponade and acute myocardial infarction secondary to coronary artery involvement should be taken into account [73]. 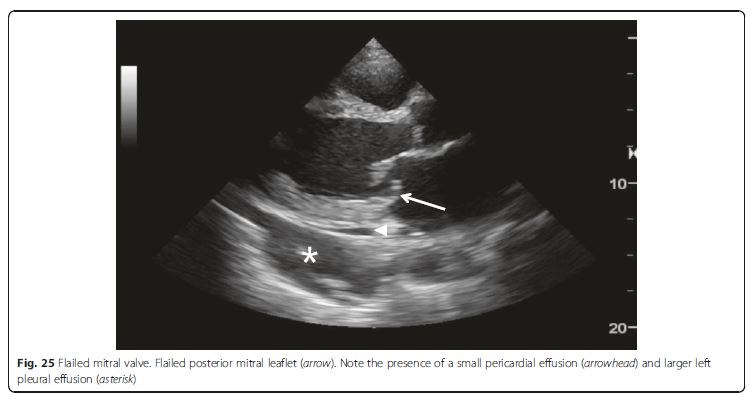 Abdominal ultrasound
Abdominal ultrasound can help to determine the cause
of hypovolemic (both absolute and relative) shock. Intraabdominal source of blood loss or infection such as peritoneal effusion, ruptured abdominal aortic aneurysm or
ectopic pregnancy, liver/spleen abscess, cholecystitis, cholangitis, or pyonephritis can be visualized [74].

Conclusions
Multi-organ point-of-care ultrasound is a powerful adjunct
to standard clinical assessment. It provides critical
and timely information in the evaluation of patients presenting
with acute dyspnea, chest pain, or shock: when
and where it matters most, right at the bedside. It has become
an indispensable part of the acute care physician’s
armamentarium, in the battle for our patients’ lives.

Figure 2: (a) ‘The bat sign.’ Two ribs with posterior shadowing represents the wings of the bat, and the hyperechoic pleural line, its body (b) A sagittal scan at the upper intercostal spaces depicting normal anatomy