The following are excerpts from Resource (1) below, The 6-min walk distance in healthy subjects: reference standards from seven countries –

We prospectively studied 444 subjects (238 males) from 10 cities in seven countries. . . . We attempted to balance the recruitment of subjects by sex, decades of age and centre. Most of the subjects were hospital workers and relatives of patients. They were included if they met the following criteria: 1) age 40–80 yrs; 2) no history of chronic disease that could influence their exercise capacity; 3) active but not involved in any competitive sport. For the analysis of the relationship between heart rate (HR) and 6-min walk distance (6MWD), we excluded any subject on medications that could affect HR, such as b-blockers or calcium
channel blockers. All subjects gave informed consent to participate in the study and ethical committees from each site
approved the study protocol.

Smoking history and blood pressure were recorded. Weight
and height were measured and used to calculate body mass
index. Lung function was assessed by spirometry according to
ATS/European Respiratory Society (ERS) guidelines [15]. The
presence and degree of comorbidity was estimated using the
Charlson index [16]. We registered the medication taken by the
patients. Subjects were questioned about involvement in
regular, self-reported physical activity in the previous three
months. The subjects were classified as ‘‘active’’ (self reported
physical activity: lower extremities exercise for o30 min, three
or more times per week) or ‘‘sedentary’’ [17].

Two 6MWTs were performed following ATS guidelines [2]. The
evaluated parameters were 6MWD in m and changes in oxygen
saturation (Sp,O2) during exercise measured using a lightweight portable pulse oximeter. The longest 6MWD of two tests (performed the same day and separated by o20 min) was the primary outcome measure. To determine the effort made by the participants, we also registered HR during the test and determined the maximal HR (HRmax). The predicted HRmax (HRmax % pred) was derived from the formula HRmax 5 220 – age.

Pre- and post-6MWT dyspnoea were measured using the Borg
scale [18]. Although all subjects performed the 6MWT according
to the standard ATS guidelines, we determined the effort
level using the ratio between HRmax during the test and HRmax
% pred (HRmax/HRmax % pred). 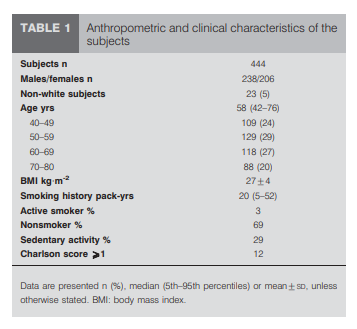 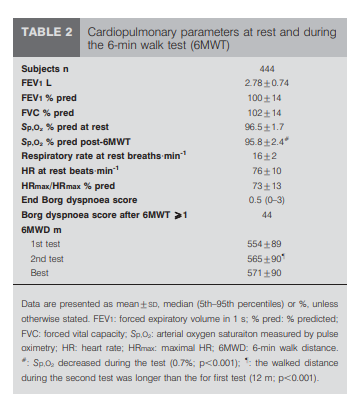 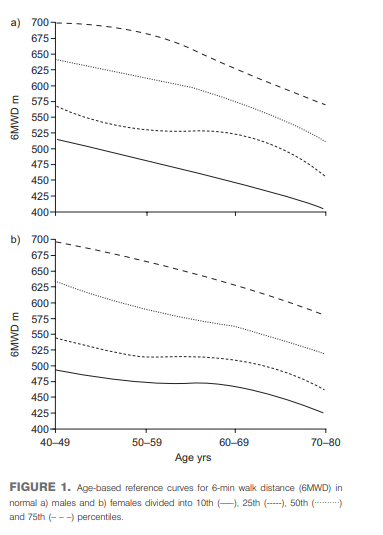 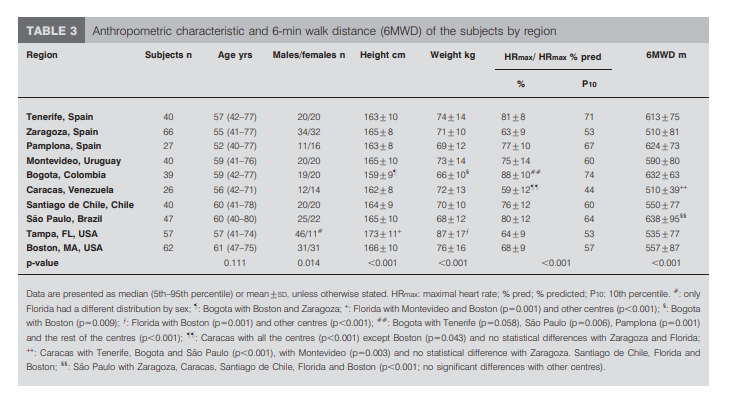 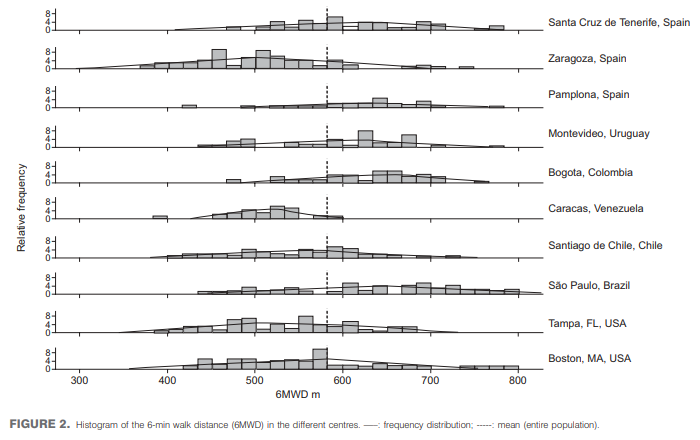 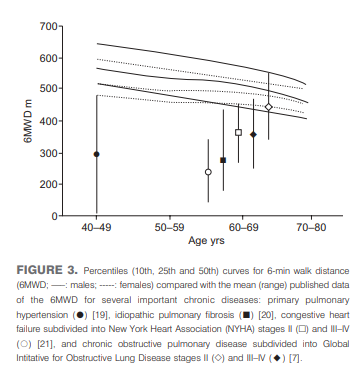 To our knowledge, this is the first international, multicentre
study evaluating the geographic variations of 6MWD in a large
cohort of healthy adults that performed the 6MWT following the ATS guidelines. There were two important findings. First,
there were 6MWD geographic variations that cannot be
explained by anthropometric factors even when the effort
was adjusted using HRmax/HRmax % pred. Secondly, the present work confirmed the importance of age and sex in the
distance walked and proposes new reference standards curves
for the use of 6MWD in clinical practice.

The most important factor influencing the 6MWD in healthy
subjects was age, a variable that has been observed in all previous studies with the exception of the one by CAMARRI et al. [12]. This is possibly related to the smaller sample size (70 subjects) and narrower age range (55–75 yrs) of that study. The effect of age is more evident in patients .60 yrs of age, independent of sex.

Physical Activity Scale for the Elderly (PASE) is a brief (5 minutes) and easily scored survey designed specifically to assess physical activity in epidemiological studies of persons age 65 years and older[6].

(5) A 2012 Algorithm For Assessing Fitness To Fly In COPD Using Rest and Exercise Oximetry Posted on July 24, 2017 by Tom Wade MD

(6) An Excercise Oximetry Step Test Protocol Suitable For The Office
Posted on May 2, 2017 by Tom Wade MD

(7) The AHA Recommends That Every Patient Have A Cardiorespiratory Fitness Evaluation Posted on December 6, 2016 by Tom Wade MD

(8) Resources for Fitness Evaluation In Children Posted on June 30, 2015 by Tom Wade MD