Just go to the link above–everything in the post is relevant. 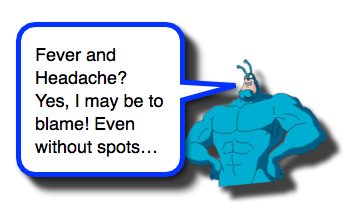 Ticks are disgusting (no offense ticks). They engorge themselves on our blood, becoming bloated sloth-like sacs of our serum. While that is certainly not appealing, what makes them most offensive is their tendency to transmit awful diseases to us.  These diseases (and unique conditions – Tick Paralysis*) are numerous, but one of the most important to review (especially for those of us in North Carolina, USA) is Rocky Mountain Spotted Fever.

*Be sure and review Dr. Fox’s post Tick Paralysis. It is very helpful for ascending paralysis.

Still here are some excerpts:

*Be sure and review Rash?, Dr. Fox’s post Pediatric Rash. This post is simply the best summary on how to safely diagnose and manage pediatric rashes that I have ever read. Thank you, Dr. Fox!

Moral of the Morsel