All that follows are excerpts from Resource (1) below:

By definition, the condition of IIH describes patients with isolated, elevated ICP that is not related to an intracranial mass lesion, a meningeal process, or cerebral venous thrombosis.3 Patients most frequently present with headaches, transient visual obscurations, papilledema, and/or pulsatile tinnitus, but may also be asymptomatic.4 Patients in whom a syndrome of increased ICP secondary to certain medications develops or who are found to have cerebral transverse venous sinus (TS) stenosis are nonetheless still classified as having IIH. IIH is the preferred term for this condition, replacing pseudotumor cerebri, which often includes cerebral venous sinus thrombosis and other etiologies of increased ICP, and benign intracranial hypertension, which does not take into account that some IIH patients do not have a “benign” course and go on to irreversibly lose vision.5

Diagnosis of IIH entails ophthalmologic examination, neuroimaging to exclude other causes of elevated ICP, and lumbar puncture (LP) with opening pressure (OP) measurement and CSF analysis to confirm elevation of CSF pressure and exclude meningeal processes (not visible on imaging). The LP may have a transient or, in some cases, sustained effect on symptoms. Treatment typically consists of weight loss (including bariatric surgery in morbidly obese patients if needed)10 and carbonic anhydrase inhibitors such as acetazolamide to decrease CSF production.11 Surgery is required in patients with a fulminant course or in whom other measures have failed, either entailing optic nerve sheath fenestration for predominantly visual signs and symptoms or CSF diversion procedures such as ventriculoperitoneal and lumboperitoneal shunting.12 Stenting of TSS reduces cerebral venous pressure and ICP and improves symptoms and signs in selected IIH patients but has been associated with serious complications such as in-stent thrombosis; nonetheless, stenting of TSS may be useful in selected patients with refractory symptoms in whom other surgical treatments have failed or those who cannot undergo other surgical treatments.13

Although neuroimaging in IIH has traditionally been thought to be normal in IIH and performed primarily to exclude other causes of elevated ICP,3 it has become clear that there are a variety of imaging findings involving the orbit, skull base, brain, and transverse venous sinuses that are commonly found in patients with IIH.14 Because IIH can exist without funduscopic findings of papilledema, the latest diagnostic scheme for IIH incorporates imaging findings as criteria for a diagnosis of “possible IIH” when papilledema is absent.15 Detection of these imaging findings suggests that IIH may be found on head computed tomography (CT) and magnetic resonance imaging (MRI). Optimal depiction of some findings and exclusion of some alternative etiologies of elevated ICP requires both imaging of the brain and venous sinuses. At our institution, the protocol consists of a brain MRI and head magnetic resonance venography (MRV), both performed without and with intravenous gadolinium contrast material (Table 1) to minimize potential pitfalls of noncontrast MRV techniques (Figure 1) and obviate ionizing radiation from CT/CT venography. Although low-field-strength MRI scanners may be sufficient to exclude large intracranial pathology, higher field strength (1.5 or 3.0 T) superconducting units are generally preferred to appreciate the imaging findings associated with chronically elevated ICP.

In the workup of IIH, MRV is generally performed to assess whether venous outflow obstruction from venous sinus thrombosis is present or whether the venous sinuses are normal. Contrast enhanced techniques are preferable (because the patient is typically already being administered intravenous gadolinium contrast to exclude an intracranial mass lesion) to noncontrast time-of-flight MRV techniques, which may not definitively characterize thrombosis vs stenosis. A smooth tapered narrowing of 1 or both of the distal transverse venous sinuses is almost universally present in IIH but is rarely found in healthy control subjects (Figure 7).29 The location of stenosis is uniformly in the same location of the distal cerebral transverse venous sinus TS and may be associated with prominent arachnoid granulations.29

Patients with SIH classically present with a positional headache that worsens in the upright position and is relieved in the supine position. The symptoms are similar to those seen in postdural puncture headaches. Other symptoms that can be seen with less frequency in the setting of SIH include cranial nerve dysfunction, visual disturbance, tinnitus, neck pain and/or radiculopathy, dementia, and altered consciousness.34 These symptoms are presumably related to the settling of the intracranial contents in the setting of low pressure with resultant nerve traction and mass effect on intracranial structures. Rarely, patients lack a headache and may be identified by incidental imaging or LP findings.35 The cause of SIH is typically a spinal CSF leak. Skull base CSF leaks are unlikely to result in the clinical syndrome of SIH.36 In addition to postoperative and posttraumatic CSF leaks, CSF leaks in the spine may originate from degenerative changes such as disc herniations37 and osteophytes,38 as well as spinal meningeal diverticula.39 Absence of the nerve root sleeve, “nude nerve root syndrome,” has also been associated with SIH.40 There is strong evidence of an underlying connective tissue disorder in patients with SIH.41 In a prospective study by Schievink et al,42 the majority of patients had clinical findings of a connective tissue disorder such as skeletal features of Marfan syndrome, Ehlers-Danlos syndrome, or isolated joint hypermobility. There are case reports of patients with Marfan syndrome43 and systemic sclerosis44 in whom CSF leaks developed. 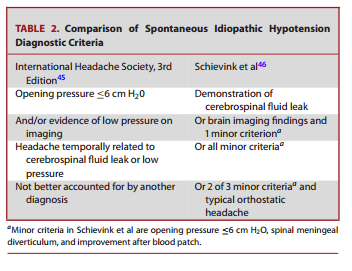 Patients may present to the neurosurgeon with signs and symptoms related to either abnormally high or abnormally low ICP. In patients presenting with findings suggesting high ICP but without other localizing signs, contrast-enhanced MRI and MRV are performed not only to exclude mass lesions, hydrocephalus, and venous sinus thrombosis, but to evaluate for orbital, skullbase, and venous imaging findings suggestive of chronically elevated ICP. In patients presenting with signs of low ICP, including positional headaches relieved in the recumbent position, MRI of the brain will frequently show findings supportive of a diagnosis of SIH, whereas MRI of the spine may help to identify a potential source of a CSF leak. Further workup, including CT-, dynamic CT-, or MRI-myelography after intrathecal contrast administration is frequently required to identify the source of the leak and to guide targeted therapy. An appreciation of the imaging findings of both elevated ICP and low ICP is helpful to potentially prevent misdiagnosis of the patient with low-lying cerebellar tonsils as a CMI.