I’ve divided these posts, my study notes on the European high blood pressure guidelines,  into several parts for ease of my review:

There are links to additional resources after this post.

There are two well-established strategies to lower BP: lifestyle interventions and drug treatment. Device-based therapy is also emerging, but is not yet proven as an effective treatment option. Lifestyle interventions can undoubtedly lower BP and in some cases CV risk (see section 7.4.1), but most patients with hypertension will also require drug treatment. The drug treatment of hypertension is founded on very solid evidence, underpinned by the largest number of outcome based RCTs in clinical medicine. Meta-analyses of RCTs including several hundred thousand patients have shown that a 10 mmHg
reduction in SBP or a 5 mmHg reduction in DBP is associated with significant reductions in all major CV events by 20%, all-cause mortality by 10 – 15%, stroke by 35%, coronary events by 20%, and heart failure by 40%.2,8 These relative risk reductions are consistent, irrespective of baseline BP within the hypertensive range, the level of CV risk, comorbidities (e.g. diabetes and CKD), age, sex, and ethnicity.2,201

Relative outcome reductions calculated by two recent metaanalyses are similar to those provided by the original meta-analysis of the effects of BP lowering on outcomes in 1994.202 Thus, the benefits of antihypertensive treatment have not been attenuated by the widespread concomitant prescription of lipid-lowering and antiplatelet therapies in contemporary medicine.

Another important objective of antihypertensive therapy is to
reduce the development of CKD; however, the slow rate of decline in renal function in most hypertensive patients makes the demonstration of potential benefits of BP lowering difficult. Consequently, the protective effect of BP reduction on kidney function can be less obvious and has been restricted to patients with diabetes or CKD, in whom there is a faster rate of disease progression.203 Some, but not all, RCTs have also shown a protective effective of BP lowering on the progression of CKD towards end-stage renal disease in both diabetic and non-diabetic nephropathy. 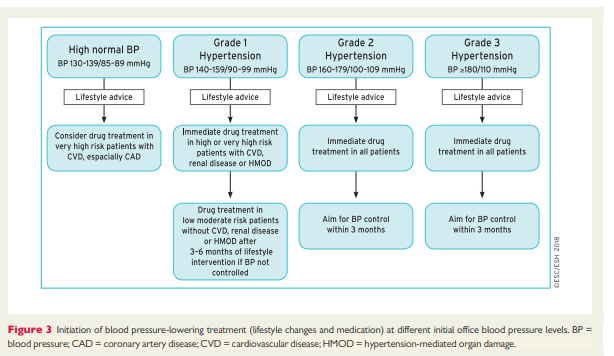 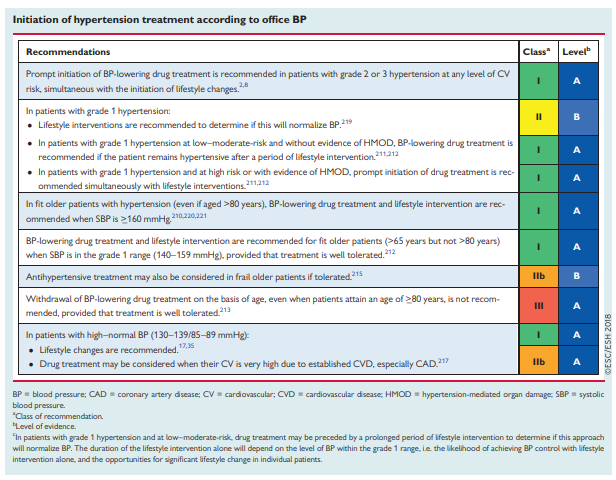 Whilst considering BP targets, it is important to acknowledge that <50% of patients treated for hypertension currently achieve a target office SBP of <140 mmHg.11,12 This is a major missed opportunity forCVD prevention in millions of people across the world.

This Task Force recommends that when BP-lowering drugs are
used, the first objective should be to lower BP to <140/90 mmHg in all patients. Provided that the treatment is well tolerated, treated BP values should be targeted to 130/80 mmHg or lower in most patients, although in some groups the evidence is less compelling. In older patients (>65 years), SBP should be targeted to between 130 and 140 mmHg, and DPB to <80 mmHg. Treated SBP should not be targeted to <120 mmHg.

Importantly, we specify a target range because the lower safety
boundary assumes greater importance when BP is targeted to lower levels. Furthermore, in general, when SBP is lowered to <120 mmHg in patients included in RCTs (i.e. older and higher-risk patients, often with comorbidities and CVD), the risk of harm appears to increase and outweigh the benefits.222

RCTs in type 1 diabetes mellitus demonstrate that BP-lowering treatment has a renoprotective effect,228 but because these patients tend to be younger, previous RCTs have had inadequate power to study CV outcomes and to establish optimal BP targets.

The article summarizes, on p 3052 of the PDF, seven articles and concludes:

In summary, In patients with diabetes receiving BP-lowering drugs, it is recommended that office BP should be targeted to an SBP of 130 mmHg,229 and lower if tolerated. In older patients (aged >_65 years) the SBP target range should be 130–140 mmHg213 if tolerated. SBP should not be lowered to <120 mmHg and DBP should be lowered to <80 mmHg. Attention should also be given to the consistency of BP control, because visit-to-visit BP variability is associated with increased CV and renal disease risk. Furthermore, CV protection has been found to be greater when BP control is accompanied by fewer visit-to-visit BP variations.239–241

The definition of ‘older’ is complex. As populations age, there is
increasingly wide variation between a patient’s chronological age and their functional status, ranging from fit, active, and independent, through to frail* and dependent. The anticipated benefits vs. potential harm of BP treatment in older patients will be influenced by the patient’s ability to tolerate treatment and their health and functional status. For the purposes of these Guidelines, ‘older’ patients are defined as those aged >_65 years.

*Note to myself: Both sets of links below need their own posts sometime in the NEAR future.

*Here are links to two articles on frailty:

*And here are links on The Comprehensive Geriatric Assessment:

Innovative GP Project of the Year: An award for outstanding work in the form of improvements or innovations implemented by individuals in a general practice setting, at either a clinical or practice management level, that improves the quality of patient care or helps free up GP time

Based on the new data, the targets suggested by the previous
Guidelines now appear too conservative for many old and very old patients, especially those who are active and independent.
Consequently, we recommend that in older patients treated for
hypertension, BP should be lowered to <140/80 mmHg, but not
below an SBP of 130 mmHg. Importantly, the impact of BP-lowering on the well-being of the patient should be closely monitored, because the increased risk of adverse events (e.g. injurious falls) with lower BP values could be more pronounced in older patients in the real-life setting than in the closely monitored conditions of RCTs. Further details on the approach to treatment of the frail older patient are discussed in section 8.8.

No outcome-based RCT has used ABPM or HBPM to guide the
treatment of hypertension. Thus, ABPM and HBPM BP targets are based on extrapolation from observational data rather than on outcome trials. Although we do not provide formal ABPM or HBPM BP targets for treated patients, it should be noted that: 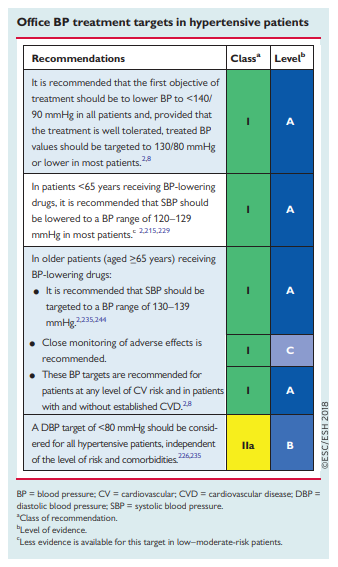 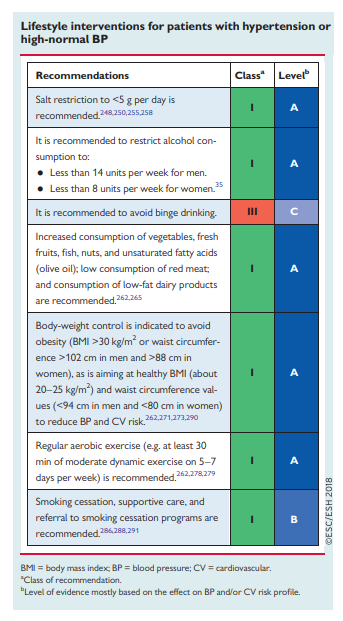 7.5.1 Drugs for the treatment of hypertension

Most patients will require drug therapy in addition to lifestyle measures to achieve optimal BP control. In the previous Guidelines, five major drug classes were recommended for the treatment of hypertension: ACE inhibitors, ARBs, beta-blockers, CCBs, and diuretics (thiazides and thiazide-like diuretics such as chlortalidone and indapamide), based on: (i) proven ability to reduce BP; (ii) evidence from
placebo-controlled studies that they reduce CV events; and (iii) evidence of broad equivalence on overall CV morbidity and mortality, with the conclusion that benefit from their use predominantly derives from BP lowering. These conclusions have since been confirmed by recent meta-analyses.1,2,217,292 These meta-analyses have reported cause-specific differences on outcomes between some drugs (e.g. less stroke prevention with beta-blockers, and less heart failure prevention with CCBs); however, overall, major CV outcomes and mortality were similar with treatment based on initial therapy with all five major classes of treatment. These Guidelines thus recommend that the same five major classes of drugs should form the basis of antihypertensive therapy. There are compelling or possible contraindications for each class of drug (Table 20) and preferential use of some drugs for some conditions, as discussed below. There is also evidence that there are differences in the persistence and discontinuation rates of the major drug classes.293,294 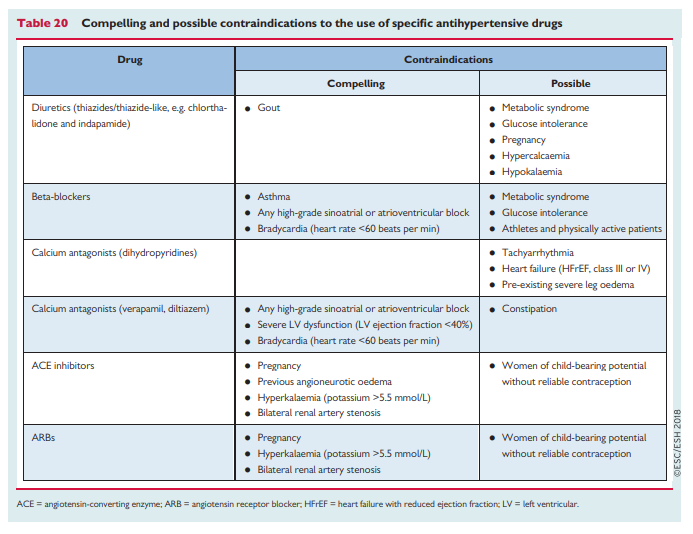 Other classes of drugs have been less widely studied in eventbased RCTs or are known to be associated with a higher risk of adverse effects [e.g. alpha-blockers, centrally acting agents, and mineralocorticoid receptor antagonists (MRAs)]. These are useful additions to the antihypertensive armamentarium in patients whose BP cannot be controlled by proven combinations of the aforementioned major drug classes.

Guidelines have generated a variety of different strategies to initiate and escalate BP-lowering medication to improve BP control rates. In previous Guidelines, the emphasis was on initial use of different monotherapies, increasing their dose, or substituting for another monotherapy. However, increasing the dose of monotherapy produces little additional BP lowering and may increase the risk of adverse effects, whilst switching from one monotherapy to another is frustrating, time consuming, and often ineffective.

For these reasons, more recent Guidelines have increasingly focused on the steppedcare approach, initiating treatment with different monotherapies and then sequentially adding other drugs until BP control is achieved. Despite this, BP control rates have remained poor worldwide.

[Few hypertensive patients reach goal. So what we are currently doing needs to change what we are doing.]

This Task Force believes that one of the most important issues to address in these Guidelines is ‘how do we improve BP control in treated patients?’. This has become an even more pressing matter because, based on new evidence, current Guidelines are recommending more stringent BP targets (on-treatment values of <_ 130/80 mmHg in the general population and <_ 140/90mm Hg in older hypertensive people), which will make the achievement of BP control even more challenging.

[On p 3059 of the Guidelines PDF, the authors suggest why we are failing to get the desired blood pressure control.]

Based on the results of outcome RCTs and recent meta-analyses,
and evidence of BP-lowering effectiveness, all five major drug classes can, in principle, be combined with one another, except for ACE inhibitors and ARBs, whose concomitant use may lead to no additional benefit but increased adverse effects and is thus discouraged.

We recommend that the treatment of hypertension should be preferentially based on combinations of an ACE inhibitor or ARB with a CCB and/or a thiazide/thiazide-like diuretic. These combinations are now widely available in a single pill and in a range of doses, facilitating simplification of treatment, flexible prescribing, and uptitration from lower to higher doses. Combination therapy that includes an ACE
inhibitor or ARB with either a CCB or thiazide/thiazide-like diuretic are complementary because both CCBs or diuretics activate the RAS, which will be counteracted by their combination with an ACE inhibitor or ARB. These combinations will also limit potential adverse effects associated with diuretic or CCB monotherapy, reducing the
risk of hypokalaemia due to diuretics and reducing the prevalence of peripheral oedema due to CCBs. These combinations also ensure that the RAS is inhibited as part of the treatment strategy, which is an important consideration for many patient groups (e.g. diabetes, LVH, proteinuria).

7.5.2.2 Rationale for initial two-drug combination therapy for most patients

As discussed above and with the emphasis in these Guidelines on
achieving a BP target in most patients of <130/80 mmHg, the majority of patients will require combination therapy. Initial combination therapy is invariably more effective at BP lowering than monotherapy, indeed even low-dose combination therapy is usually more effective than maximal dose monotherapy.341 Furthermore, the combination of medications targeting multiple mechanisms, such as blocking the RAS as well as inducing vasodilatation and/or diuresis, reduces the heterogeneity of the BP response to initial treatment and provides a steeper dose response than is observed with escalating doses of monotherapy.342 Finally, two-drug combinations as initial therapy have been shown to be safe and well tolerated, with no or only a small increase in the risk of hypotensive episodes,341 even when given to patients with grade 1 hypertension,343 in which adverse events leading to treatment discontinuation are infrequent.294

When BP remains uncontrolled with three-drug combination therapy, the patient is classified as having resistant hypertension, assuming that secondary causes of hypertension and poor adherence to treatment have been excluded, and that the elevation in BP has been confirmed by repeated office BP measurement, ABPM, or HBPM (see section 8.1). Such patients should be considered for specialist evaluation.

And now go on to

The Drug Treatment Algorithm For Hypertension – Part 3 Of Links To And Excerpts From The 2018 European Guidelines For The Management Of Hypertension
Posted on November 16, 2019 by Tom Wade MD

(5) “HOW TO CHECK A HOME BLOOD PRESSURE MONITOR FOR ACCURACY” From The American Medical Association
Posted on November 14, 2019 by Tom Wade MD

This entry was posted in Guidelines, Hypertension. Bookmark the permalink.