In this post, I’ve simply excerpted portions of the  blog post of October 24, 2019 from Dr. Smith’s ECG blog.

I do this because doing so helps me fix the concepts in my mind.

Visitor’s to this blog should simply go to the original article on Dr. Smith’s ECG blog where they will discover many more resources.

However, I have included three additional resources that many learners will find helpful: 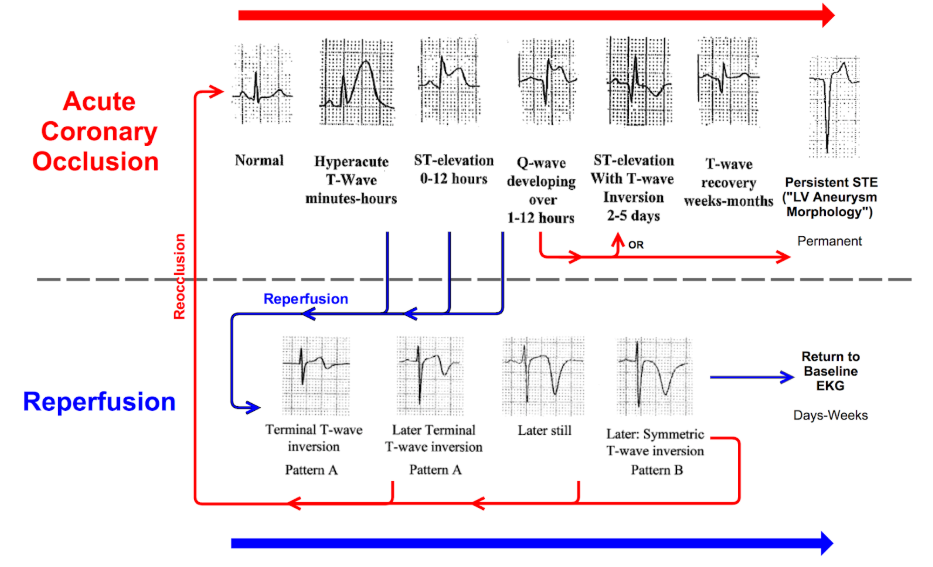 And now here are excerpts from Dr. Walsh’s post:

This is written by Brooks Walsh.
https://twitter.com/BrooksWalsh
A 30 year-old woman was brought to the ED with chest pain.

It had started just after nursing her newborn, about an hour prior, and she described it as a severe non-pleuritic “pressure” radiating to the back.She had given birth a week ago, and she had similar chest pain during her labor. She attributed the chest pain to anxiety and stress, saying “I’m just an anxious person.”

A CXR and a CTA for PE were normal.

The ECGs
An initial ECG was obtained as the pain was rapidly resolving:

Minimal upsloping ST Elevation in III, with a steeply biphasic T wave, and with reciprocal ST depression in leads I and aVL.
There is also a Q-wave in III.
This strongly suggests reperfusing RCA ischemia.
There is also subtle STD in V3-V5.
(Inverted T in V2 is likely due to lead misplacement — this is evidence by the inverted P-wave)

Aside from a slightly biphasic T wave in lead III, the findings from the first ECG are now resolved.

This dynamic findings, especially when correlated with the patient’s resolving symptoms, are not “non-specific.” The biphasic T wave is consistent with recent reperfusion of an occluded coronary artery supplying the inferior region. The initial STD depression in aVL and V3-V5 (later resolved)  further supports a very recent occlusion affecting this area.

Troponins, echocardiogram
An echocardiogram showed inferobasilar hypokinesis, further supporting a diagnosis of regional ischemia, likely of the area supplied by the RCA.
The initial troponin I was elevated at 0.75 ng/ml (99th %-ile URL = 0.04 ng/ml), and rose to 12 ng/ml six hours later. This rate and height of troponin rise strongly suggested a type 1 MI.

Angiography
Angiography was performed after aspirin and heparin were started. Here’s the angiogram of the RCA: 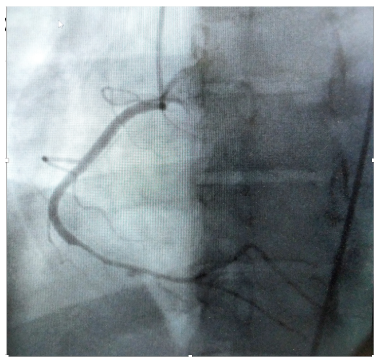 No thrombus or plaque rupture in the RCA (or any coronary artery) was found. However, a smooth tapering of the mid-RCA was seen, highlighted in red below: 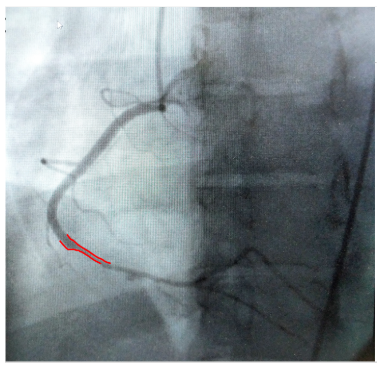 However, in the intervening years there have been marked changes in the understanding of SCAD. Many of these issues were described in a prior post by Dr. Angie Lobo (@aloboMD)

An athletic 30-something woman with acute substernal chest pressure

1. SCAD isn’t rare, especially in women
Historically SCAD had been identified in < 1% of angiograms performed for ACS. However, contemporary studies find it in up to 4% of ACS, and in > 22% of ACS cases in women. A recent study found that SCAD causes almost 20% of STEMI in young women.
2. Pregnancy is not a common cause of SCAD
When ACS occurs in the peripartum period, SCAD is responsible in 43% of cases. However, pregnancy-associated spontaneous coronary dissection (PA-SCAD) is still pretty uncommon, and accounts for less than 5% of SCAD cases overall. Fibromuscular dysplasia is a much more common trigger for SCAD.
3. SCAD can have subtle angiographic features, and coronary CTA is unhelpful.
SCAD was originally thought to show a characteristic dissection flap and and false lumen(s) ion angiography. However, this “classic” pattern ( “Type 1”) only occurrs in about 25% of cases. Most SACD does not create a flap, and shows instead a long smooth narrowing of the true lumen. Type 2 is seen in almost 70% of cases. Our patient had a type 2 lesion.
Type 2 is more difficult to appreciate on angiography than type 1. The relatively poorer resolution of cardiac CTA makes it especially inappropriate to rule out SCAD. Often, intravascular ultrasound or intravascular optical coherence tomography is requeried to make the diagnosis. 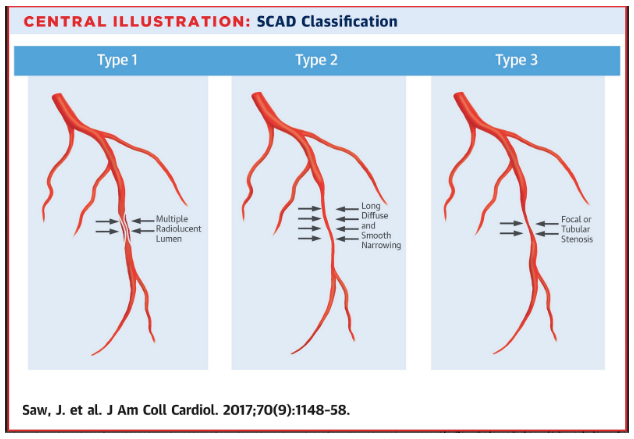 4. You don’t just treat it like ACS caused by CAD
Aggressive intervention may cause more problems than the original SCAD lesion. Guidewires for PCI may be difficult to thread through the weak, twisty arteries, and may rupture the false lumen. Heparin hasn’t been shown to help or hurt, but could theoretically promote expansion of an intramural hematoma. Fibrinolytics have been associated with devastating complications. While there isn’t good evidence that aspirin and beta-blockers help, there are few concerns about their safety, and they are generally recommended.

5. Coronary lesions often resolve without intervention, but PCI has role
Treatment of SCAD requires a different risk-benefit calculation than ACS caused by typical atherosclerotic disease, as shown by two studies form this year.

On the one hand, most SCAD lesions resolve with only conservative treatment, and PCI is not required. A study byHassan et al. provided evidence that PCI/CABG was unnecessary for most SCAD, and should be considered for only high-risk presentations. 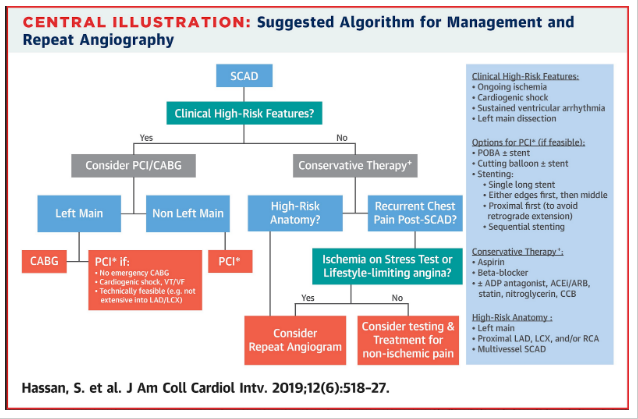 On the other hand , high-risk lesions appear to do well with aggressive treatment.Lobo et al.examined SCAD presenting as STEMI (unlike Hassan et al. where more than 3/4 of cases were NSTEMI). The SCAD cases in Lobo et al. were pretty sick, with mostly LM/pLAD lesions and high rates of cardiogenic shock. Despite this, there was a high rate of PCI success.

Outcome of our case

Once the type 2 SCAD was identified, the heparin drip was stopped. No PCI was performed, and only conservative medical therapy was pursued. No evidence of a connective-tissue disease such as FMD was found. She did well, and was ultimately discharged from her cardiologist’s care years later!

[See the References at the bottom of Dr. Walsh’s post]