Google+ Links to and Excerpts From "Diagnosis of cirrhosis and portal hypertension: imaging, non-invasive markers of fibrosis and liver biopsy" - Tom Wade MD

Links to and Excerpts From “Diagnosis of cirrhosis and portal hypertension: imaging, non-invasive markers of fibrosis and liver biopsy”

In this post I link to and excerpt from Diagnosis of cirrhosis and portal hypertension: imaging, non-invasive markers of fibrosis and liver biopsy [PubMed Abstract] [Full Text HTML] [Full Text PDF]. Gastroenterol Rep (Oxf). 2017 May; 5(2): 79–89.

The above article has been cited by other articles in PubMed Central.

The concept of ‘cirrhosis’ is evolving and it is now clear that compensated and decompensated cirrhosis are completely different in terms of prognosis. Furthermore, the term ‘advanced chronic liver disease (ACLD)’ better reflects the continuum of histological changes occurring in the liver, which continue to progress even after cirrhosis has developed, and might regress after removing the etiological factor causing the liver disease. In compensated ACLD, portal hypertension marks the progression to a stage with higher risk of clinical complication and requires an appropriate evaluation and treatment. Invasive tests to diagnose cirrhosis (liver biopsy) and portal hypertension (hepatic venous pressure gradient measurement and endoscopy) remain of crucial importance in several difficult clinical scenarios, but their need can be reduced by using different non-invasive tests in standard cases. Among non-invasive tests, the accepted use, major limitations and major benefits of serum markers of fibrosis, elastography and imaging methods are summarized in the present review.

Classically, cirrhosis is defined by its histological hallmark findings on liver biopsy (regenerative nodules surrounded by fibrotic tissue) and is considered as the final evolution stage of
any progressive liver disease, irrespective of its etiology. The advances in diagnostic methods allow now early diagnosis, even
before the development of complications, which are mostly
related to development of portal hypertension [1].

The natural history of cirrhosis is marked by the transition
from the compensated stage (with good prognosis) to the occurrence of decompensation events, such as ascites, variceal
bleeding, jaundice and hepatic encephalopathy. If the diagnosis
of cirrhosis is relatively straightforward during the decompensated stage when the treatment may be problematic, on the contrary, diagnosing cirrhosis while it is still in the compensated stage is more challenging. The progression of fibrosis parallels the increase in portal pressure and, frequently, patients with severe fibrosis in the pre-cirrhotic stage have a hepatic venous pressure gradient (HVPG) >5 mmHg [5]. Since chronic liver disease is a continuum, and due to the inhomogeneity of fibrosis within the liver [6], the border between severe fibrosis and compensated cirrhosis is often unclear and, recently, the Baveno VI consensus recommended that this clinical scenario including severe fibrosis and initial cirrhosis should be named compensated advanced chronic liver disease (cACLD)* [7].

Moreover, the concept of diagnosis of cirrhosis is changing
from the documentation of histological F4 fibrosis to the identification of patients truly at risk of developing complications. It has been clearly demonstrated that the onset of clinically significant portal hypertension (defined as HVPG*  ≥  10 mmHg) marks the progression to a stage at risk of clinical complications.

In this [the above] scenario, non-invasive methods able to mirror the haemodynamic threshold play an important role. For instance, according to the recommendations of the last Baveno consensus conference, liver stiffness (measured by transient elastography) over 21 kPa is accurate enough to identify patients with clinically significant portal hypertension, so allowing a simple and readily available risk stratification when more sophisticated and exact methods are not available [7].

The natural history of chronic liver disease eventually leading to cACLD and complications of cirrhosis is represented in Figure 1, together with the main tests used for its diagnosis, staging and risk stratification. 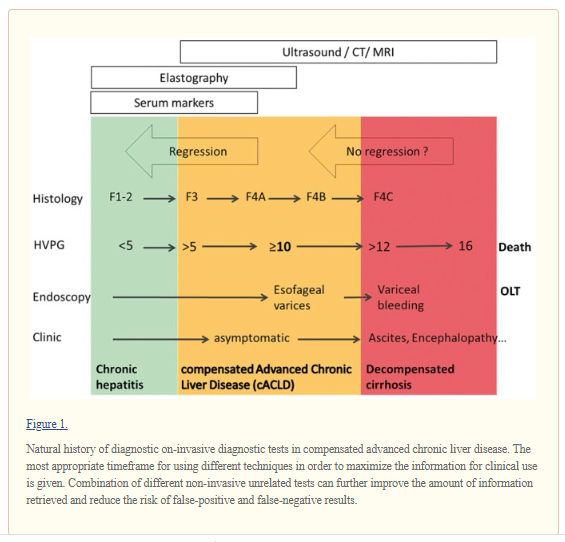 In this manuscript, we review the diagnostic performance
of gold-standard invasive methods and surrogate noninvasive methods used in this setting in light of the new concept
of cACLD

Liver biopsy is still considered the gold-standard diagnostic
method to identify the typical features of cirrhosis. Alternative
diagnostic methods have been validated in comparison to liver biopsy and have a good diagnostic accuracy for the diagnosis of cirrhosis. As a consequence, the use of liver biopsy has dramatically decreased in the last 10 years; nonetheless, it remains a crucial diagnostic tool when concomitant potential etiological factors for liver disease coexist and when the identification of features other than fibrosis leads to changes in the clinical management of patients, such as in the case of acute or chronic liver injury.

Currently, the most important and frequent scenario that requires a mandatory liver biopsy is the differentiation between severe alcoholic hepatitis and decompensated alcoholic cirrhosis, because [for] now there are no specific clinical signs or non-invasive methods to differentiate between the two conditions [8].

Liver biopsy is largely used in patients with suspected liver cirrhosis of unknown aetiology in order to confirm the diagnosis and expand on its possible cause (e.g. indicating the distribution of fibrosis in the liver).

It remains key also in the case of suspected non-alcoholic steatohepatitis (NASH)-related ACLD and in cholestatic* and autoimmune chronic liver disease** for which data regarding the diagnostic accuracy of non-invasive methods are scarce.

The most frequent indications for liver biopsy are presented in Table 1 [9,10].

Liver fibrosis and its patterns remain of paramount importance in risk stratification of patients, even in those who have
fully established liver cirrhosis.

[There are] Four main patterns of fibrosis development according to different aetiologies.  .  .

According to the different types of fibrosis distribution, the
portal hypertension occurs earlier, as in the case of viral, autoimmune or Budd-Chiari syndrome, or later in the course of the disease, as in the case of metabolic diseases.

Interestingly, even if sinusoidal portal hypertension develops later in the case of biliary diseases, due to the portal-to-portal distribution of fibrosis and development of porto-portal septa, there is an increased presinusoidal resistance that will increase portal pressure, so that the HVPG* underestimates the value of the portal pressure gradient in patients with cholestatic liver disease.

As the disease progress, the amount of fibrosis increases and
in parallel the portal pressure rises [13] corresponding to worsening in the prognosis [14,15].

Because the majority of complications are conditioned by
portal hypertension occurrence, the measurement of HVPG has
probably an important prognostic relevance that might exceed
that of histological modifications. HVPG is through internal
jugular vein, femoral vein or cubital vein access under local anaesthesia [21,22]. [The rest of this paragraph details the technique of HVPG.]

Due to the relative invasiveness and the lack of wide diffusion of the method, HVPG is considered by many as only a research method to assess portal pressure but, in the authors’ opinion, it should be considered a crucial and readily available, mature method to achieve clinically important information.

HVPG is a safe technique that has no absolute contraindications [26]. In patients requiring transjugular liver biopsy, the measurement of HVPG adds only a few minutes to the procedure but provides very relevant haemodynamic information. In our practice, whenever liver biopsy is indicated in patients with cACLD, we prefer the transjugular approach to obtain both histological findings and HVPG measurement.

HVPG is probably the most validated tool for assessing prognosis in cACLD. In Table 2 are presented the most relevant clinical end-points with which HVPG was associated [1,5,24,27–33]. All this body of evidence indicates HVPG to be the best tool for assessing the prognostics of patients with cACLD*. 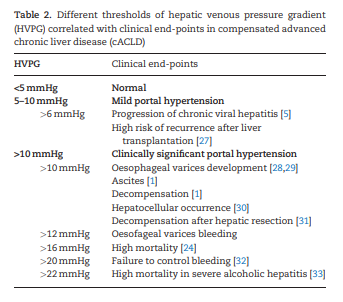 Due to its extensive validation against strong clinical endpoints and since changes in HVPG well reflect changes in prognosis (in terms both of improvement when HVPG decreases and
of worsening when HVPG increases), HVPG is probably the best
surrogate marker of clinical events in patients with cACLD.

Bleeding from oesophageal varices remains one of the most severe complications of cirrhosis despite the advances in its management.

Universal endoscopic screening of oesophageal varices was recommended in all patients newly diagnosed with cirrhosis until 2015 [44].

In the last 10 years, increasing evidence regarding non-invasive methods (especially transient elastography) accumulated and proved useful for stratifying the risk of carrying varices and varices requiring treatment in patients with cACLD

Based on an acceptable risk of 5% of missed varices requiring treatment, the 2015 Baveno consensus conference recommended that patients with normal platelet count and liver-stiffness measurement by transient elastography <20 kPa could safely avoid screening endoscopy[7]. Papers published in full and several abstracts confirmed that this strategy is safe and allows the sparing of 15–25% of unnecessary endoscopies. Patients exceeding at least one of these criteria should undergo screening endoscopy in order to detect high-risk varices that would benefit from prophylactic treatment.

It is important to note that this [the above] strategy applies to well compensated patients, while patients with decompensated
cirrhosis should undergo endoscopy irrespective of their platelet count and liver-stiffness value, due to the much higher risk
of varices requiring treatment in this population [7].

Endoscopy remains needed to identify other signs of portal
hypertension such as hypertensive gastropathy that is often the
cause of minor bleeding in patients with cirrhosis.

Since a long time ago, simple blood tests were used in the diagnosis and prognostication of patients with advanced liver diseases

Table 3 summarizes the most validated serum tests for diagnosis of cirrhosis and clinically significant portal hypertension validated in comparison with HVPG measurement [47–64].

This entry was posted in Hepatology. Bookmark the permalink.