Here is a table of contents for the contents of this article. Pages numbers are to the PDF. Links are to the HTML.

All that follows is from the above article:

A complete blood cell count (CBC) is one of the most common laboratory tests in medicine. For example, at our institution alone, approximately 1800 CBCs are ordered every day, and 10% to 20% of results are reported as abnormal. Therefore, it is in every clinician’s interest to have some understanding of the specific test basics as well as a structured action plan when confronted with abnormal CBC results. In this article, we provide practical diagnostic algorithms that address frequently encountered conditions associated with CBC abnormalities including anemia, thrombocytopenia, leukopenia, polycythemia, thrombocytosis, and leukocytosis. The objective is to help the nonhematologist recognize when a subspecialty consultation is reasonable and when it may be circumvented, thus allowing a cost-effective and intellectually rewarding practice.

Therefore, the electronic counter not only registers the total cell count but also estimates the average cell volume and the variation in cell size. In the context of RBCs, for example, these measurements are referred to as the mean corpuscular volume (MCV) and the RBC distribution width, respectively. Modern electronic counters are also capable of multimodal assessment of cell size and content, thus providing additional information about the various categories of WBCs including neutrophils, lymphocytes, monocytes, eosinophils, and basophils (ie, 5-part differential).

Two other “measured variables” of the complete blood cell count (CBC) are hemoglobin (Hgb) and hematocrit (Hct). Both provide equivalent information, approximately conveyed by the RBC count, and are interchangeable.3, 4 The Hgb is computed by a spectrophotometer after RBCs are lysed in a given volume of blood and the Hgb is chemically converted into a stable pigment. The Hct is determined by a microhematocrit centrifuge and represents the percentage of a given volume of whole blood that is occupied by packed RBCs.5, 6 However, Hct also can be calculated by multiplying the RBC count and the MCV. Other “calculated” variables in the CBC include the mean corpuscular Hgb content (Hgb × 1/RBC count) and mean corpuscular Hgb concentration (Hgb × 1/Hct); these 2 calculated values are rarely used in routine clinical practice.

Finally, an “abnormal” CBC should be interpreted within the context of an individual’s baseline value because up to 5% of the general population without disease may display laboratory values outside the statistically assigned “normal” reference range7 (Table 18, 9). Likewise, an individual may display a substantial change from his or her baseline (ie, personal normal) without violating the “normal” reference range. Similarly, differences in the CBC based on race and sex should be considered when interpreting results. In general, RBC-associated measurements are lower and platelet counts are higher in women compared with men, and persons of African ancestry display significantly lower Hgb, WBC, neutrophil, and platelet counts than white persons.8, 9 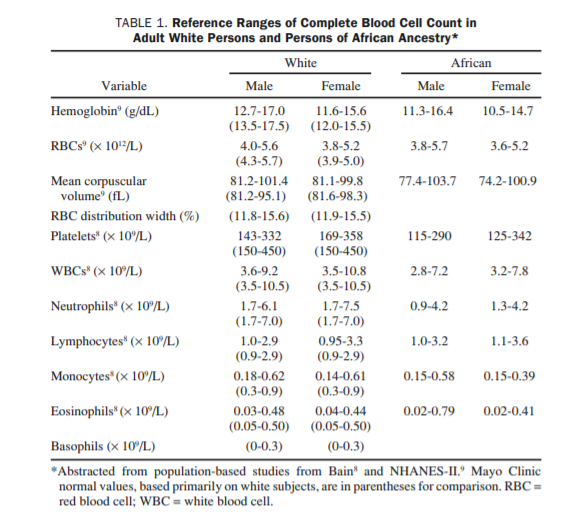 This entry was posted in Hematology, Medical Tests. Bookmark the permalink.