Likelihood Ratios – Some Resources With Excerpts

What follows are excerpts from Resource (1) below:

What is a Likelihood Ratio?

Likelihood ratios (LR) are used to assess two things: 1) the potential utility of a particular diagnostic test, and 2) how likely it is that a patient has a disease or condition. LRs are basically a ratio of the probability that a test result is correct to the probability that the test result is incorrect. The sensitivity and specificity of the test are the numbers used to generate a LR, which is calculated for both positive and negative test results and is expressed as ‘LR+’ and ‘LR-‘, respectively. The calculations are based on the following formulas:

LRs are commonly used in decision-making based on Bayes’ Theorem. Bayes’ Theorem is basically a mathematical recognition of context as an important factor in decision making. In other words no diagnostic test is perfect, and because every test will be wrong sometimes the likelihood that a test is right will depend heavily upon its context. This approach requires an estimate of the probability of a disease before any test is ordered (i.e. the ‘pre-test probability’).

Thus, the calculation of how likely it is that someone has a disease is based on a pre-test probability (typically estimated by the clinician), with LRs applied to this number. A critical, and often discussed, part of this process is the estimation of pre-test probability of a disease, something that can vary by clinician, by setting, by location, and many other factors.

Keeping this model in mind, it is obvious that a test could only be useful if its LR can significantly alter the probability of a diagnosis. Thus if the LR value is 1 then the value of the diagnostic test is of no practical significance. The further away the LR value is from 1, the more useful it will be.

How to Use Our Web-Based LR Tool

Each disease/condition has a corresponding page with LRs for both positive and negative findings, as extracted from the highest quality available literature on the topic.

The following are excerpts from Resource (2) below:

Likelihood ratios (LRs) constitute one of the best ways to measure and express diagnostic accuracy. Despite their many advantages, however, LRs are rarely used, primarily because interpreting them requires a calculator to convert back and forth between probability of disease (a term familiar to all clinicians) and odds of disease (a term mysterious to most people other than statisticians and epidemiologists). Although nomograms can circumvent these calculations,1,2 these nomograms are rarely accessible at the bedside and are seldom used. This article describes a simpler method of interpreting LRs, one that avoids calculators, nomograms, and conversions to odds of disease, and one that illustrates how LRs can refine diagnostic decisions at the bedside.

[The article has a section on how to perform the calculations to determine the LRs. These are somewhat complex and the authors give us an easier method.]

A SIMPLER METHOD OF APPLYING LRS

Although this method is inaccurate for pretest probabilities less than 10% or greater than 90%, this is not a disadvantage, because these polar extremes of probability indicate diagnostic certainty for most clinical problems, making it unnecessary to order further tests (and apply additional LRs). 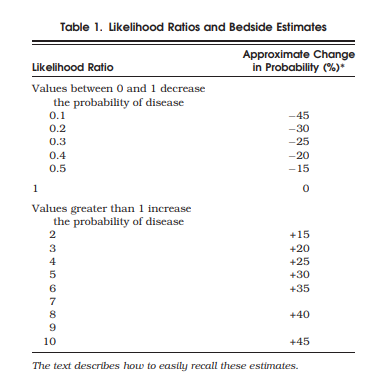