Link To And Excerpts From ECG Cases 10 Hyperkalemia: The Great Imitator

In this post I link to and excerpt from Emergency Medicine Cases‘ ECG Cases Hyperkalemia: The Great Imitator. Written by Jesse McLaren; Peer Reviewed and edited by Anton Helman. June 2020. 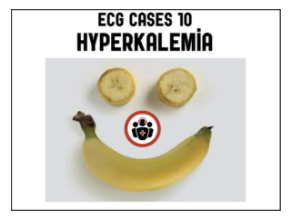 Which of the following 9 patients had hyperkalemia? Can you estimate how high their serum potassium was based on the ECG?

Hyperkalemia has been called the great ECG mimicker. By poisoning the atria, hyperkalemia can produce bradycardia, and reduced P wave amplitude can mimic “regular” atrial fibrillation or junctional rhythm. By slowing conduction, hyperkalemia can produce AV blockade, fascicular or bundle branch blocks, or wide complex rhythms that mimic ventricular rhythms (but slower or wider than VT). By blocking sodium channels, hyperkalemia can produce Brugada phenocopy with ST elevation that can be mistaken for STEMI, and by altering the membrane potential hyperkalemia leads to peaked T waves that might be mistaken for ischemic hyperacute T waves—but the former are pinched, with a narrow base and sharp peak, while the latter are bulky, with a wide base and broader peak. Occasionally these peaked T waves are so narrow and tall that ECGs machines will confuse them with QRS complexes and double-count them, leading to a false label of tachycardia [2]. In paced rhythms, hyperkalemia can lead to failure to capture, increased latency from pacemaker to depolarization, and widening of the paced complexes [3].

With so much mimicry, it’s not surprising that hyperkalemic changes are not specific in isolation: one study found that 20% of normokalemic ECGs had one change that can be seen in hyperkalemia—including bradycardia, first degree heart block, wide QRS, or peaked T waves—but only 4% had more than one finding. On the other hand, each of these findings were more common with hyperkalemia, both individually and collectively: 39% of those with severe hyperkalemia (>7) had ECG changes, and 32% had more than one change. [4] In another study, 71% of those with K>6.5 had ECG changes and 43% had more than one. The greatest risk for adverse events was not only PR/QRS prolongation, but also bradycardia and junctional rhythm. Despite these abnormalities the median time from ECG to treatment was 85 minutes, independent of ECG changes, suggesting that physicians are waiting for potassium levels before starting treatment. As a consequence, 15% had adverse outcomes (unstable bradycardia, VT, CPR or death), all of whom had preceding ECG abnormalities (and 86% of whom had more than one), all prior to receiving calcium and all but one prior to potassium-lowering medication.[5]

ECG changes depend not only the potassium level but its rate of increase and associated metabolic abnormalities, and the clinical impact can be magnified by medications like AV-nodal blockers. The BRASH syndrome (Bradycardia, Renal Failure, AV node blockers, Shock and Hyperkalemia) can produce bradycardia and shock out of proportion to potassium level or ECG changes—because the synergy of AV blockers and hyperkalemia on bradycardia, which in turn worsens renal failure and reduces clearance of AV blockers and potassium. So serum levels don’t correlate well with ECG changes or clinical outcome, and patients can become clinically unstable even with narrow QRS. But multiple ECG changes and clinical instability can predict significant hyperkalemia and guide emergency treatment, including empiric calcium.

Which of the following 9 patients had hyperkalemia? Can you estimate how high their serum potassium was based on the ECG?

Patient 1. 80yo from a nursing home with a few days of lethargy, decreased po intake