Link To And Excerpts From ECG Cases 14: Q-waves and Occlusion MI From EMC

In this post I link to and excerpt from Emergency Medicine Cases‘ ECG Cases 14: Q-waves and Occlusion MI. Written by Jesse McLaren; Peer Reviewed and edited by Anton Helman. October 2020.

Note to myself when reviewing: First review the notes below from Dr. McClaren’s post and then go to the post itself to test myself by reviewing the nine ECGs he has provided for us. 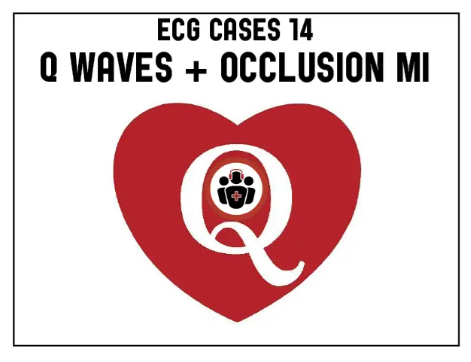 With normal conduction, ventricular depolarization travels left to right in the septum and then through both ventricles, with net forces towards the larger left ventricle. So, in the normal ECG, right sided leads have small positive R waves and larger negative S waves, and left sided leads can have tiny negative “septal Q” waves and positive R waves. Q-waves can be physiological (normal vector heading away from aVR, V1 or III), secondary to abnormal depolarization (eg reversed septal depolarization in LBBB, abnormal conduction in LVH, accessory pathway in WPW), or pathological (eg from MI or cardiomyopathy). Posterior MI doesn’t produce Q-waves on the 12 lead (unless associated with inferior or lateral MI), but instead produces tall R waves in the anterior leads.

As the Fourth Universal Definition of MI summarizes: “A QS complex in lead V1 is normal. A Q-wave <0.03 s and <0.25 of the R wave amplitude in lead III is normal if the frontal QRS axis is between −30o and 0o. A Q-wave may also be normal in aVL if the frontal QRS axis is between 60o and 90o. Septal Q-waves are small, nonpathological Q-waves <0.03 s and <0.25 of the R-wave amplitude in leads I, aVL, aVF, and V4–V6. Pre-excitation, cardiomyopathy, TTS, cardiac amyloidosis, LBBB, left anterior hemiblock, LVH, right ventricular hypertrophy, myocarditis, acute cor pulmonale, or hyperkalemia may be associated with Q-waves or QS complexes in the absence of MI.” [1] It lists the following ECG changes as associated with prior MI (in the absence of LVH or LBBB):

Myocardial infarctions used to be retrospectively dichotomized into Q-wave vs non-Q-wave MI, with the former considered to have had irreversible transmural necrosis. The STEMI paradigm shifted the dichotomy from observing the evolution of Q-waves to reperfusing those with ST elevation, but maintained the view that Q-waves represented late and irreversible infarction. The AHA’s 2013 STEMI guideline states that “the majority of patients will evolve ECG evidence of Q-wave infarction,” and the 2014 NSTEMI guidelines state that “significant Q-waves are less helpful…suggesting prior MI.”[2-3]

As a consequence, a “completed Q-wave infarct” is associated with withholding reperfusion from patients diagnosed with STEMI within 12 hours of first medical contact [4]. But new Q-waves can develop after as little as one hour of ischemic symptoms, and are associated with larger infarcts, lower EF and higher mortality [5-6]. As another study of STEMI patients treated within 12 hours of symptom onset found, “myocardial salvage was still substantial in patients with early QW, indicating that patients with STEMI and early QW frequently have favorable outcome after reperfusion despite presumed transmural and irreversible myocardial damage. The presence of early QW in patients presenting with significant ST-segment elevations within 12 hours after onset of clinical relevant symptoms should therefore not exclude patients from treatment with primary PCI.” [7]. As further proof that Q-waves can be acute and reversible, a follow-up study of STEMI patients with new Q-waves treated within six hours of symptom onset found that 39% eventually regressed—associated with greater spontaneous or collateral circulation, less peak enzyme levels, and a greater EF [8]. The 2017 ESC guideline now states that “the presence of Q-wave on the ECG should not necessarily change the reperfusion strategy [9], and the 2018 Fourth Universal Definition of MI explains that “in general, the development of Q-waves indicates myocardial necrosis, which starts minutes/hours after the myocardial insult. Transient Q-waves may be observed during an episode of acute ischemia.”

On the other hand, old anterior QS waves with persisting ST elevation (LV aneurysm morphology) are the most frequently misdiagnosed form of ST elevation in ED patients presenting with chest pain, and can lead to unnecessary cath lab activation [10]. ECG machines and STEMI criteria can not tell the difference, but past medical history, symptom duration, prior ECG and other ECG criteria can help with this distinction. Acute ischemia produces hyperacute T waves (relative to the preceding QRS complex) that can help differentiate new STE from old STE. If the differential is LV aneurysm vs anterior STE (i.e. not STE from LBBB or LVH), then a single lead in V1-4 with a T wave amplitude to QRS amplitude ratio > 0.36 identifies STEMI with a sensitivity of 92% and specificity of 81%. False negatives arise when the symptoms have been present for more than 6 hours, because hyperacute T waves diminish and can become inverted [11-12].

Now go to Dr. McClaren’s post and test yourself against his nine ECGs.

Case 1: 70yo with past medical history of hypertension, an hour of shoulder pain. Borderline tachycardia, other vitals normal. Old then new ECG:

Impression: “new LBBB” which led to cath lab activation. But no ECG features of Occlusion MI in patient with atypical symptoms. Trops and cath negative.