In this post I link to and excerpt from the following:

The history should narrow down the differential diagnosis by assessing the onset of illness in relation to the dates
of travel, taking a thorough travel history and details of any pre-travel precautions. This will direct initial tests and management and inform any infection control measures
that need to be taken.

It is vital to ascertain the interval between potential
exposure and symptom onset. Many infections have
defined incubation periods (Table 1); most febrile
travellers present within 1 month of return and many
infections can be excluded if they present later (Bottieau et
al, 2006). 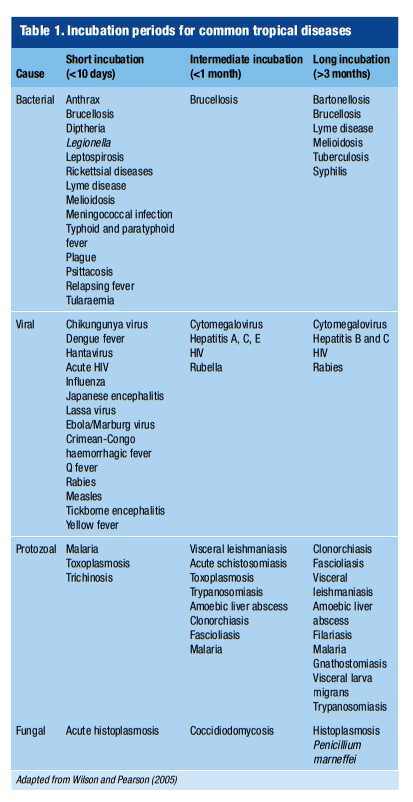 Table 2 summarizes the ‘red flags’ in the history
which indicate the need for a risk assessment and urgent
infection prevention against viral haemorrhagic fevers,
Middle East respiratory syndrome coronavirus and avian
influenza. Risk assessments for these can be found at the
Public Health England website (Public Health England,
2015, 2017, 2018). Over time more emerging infections
are likely to be encountered, so it is important to access
the latest information and advice; Table 3 details suggested
resources. 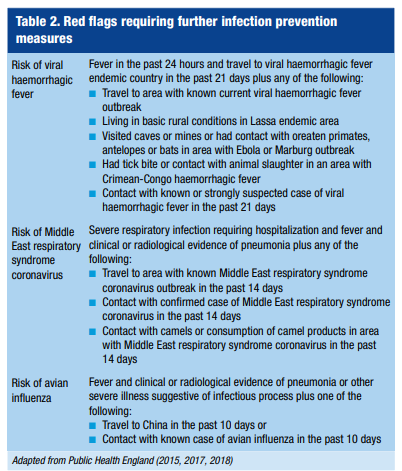 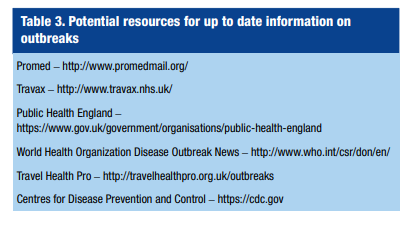 A travel history checklist is summarized in Table 4. 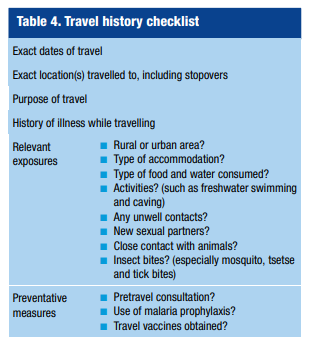 Routine non-travel related pathogens and noninfectious causes of fever such as autoimmune diseases, malignancies or medications should be considered (Dewitt et al, 2017).

This should comprise an assessment of how unwell the patient is along with a physical examination for any localizing features which may point to a diagnosis such as jaundice, rash, skin lesions, lymphadenopathy, retinal or conjunctival changes, hepatosplenomegaly or neurological findings. The examination should include looking for genital lesions and a thorough examination for eschars (pointing to rickettsial disease) as these
are often found in ‘hard to assess’ places such as the natal cleft and under the breasts (Johnston et al, 2009).

Patients with respiratory distress, hypotension or shock, haemorrhage, confusion, meningism or otherneurological findings should be urgently investigated (Centers for Disease Control and Prevention (CDC), 1995) and those fitting local criteria for sepsis started on broad spectrum antibiotics. 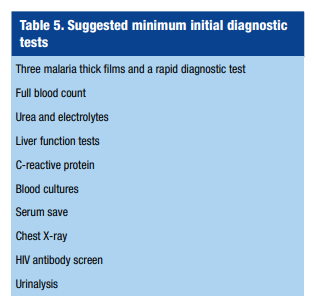 A malaria rapid diagnostic test and three malaria thick
films for microscopy should be performed over 72 hours
for anyone who has travelled to a malaria region in the past
year.

HIV testing should be offered to any febrile returning
traveller (Johnston et al, 2009).

A systemic febrile illness without localizing signs is a common presentation as found in 35% of 24 940 travellers attending GeoSentinel sites (Wilson et al, 2007).

Most of these present within 2 weeks of return (Gautret et al, 2009) and the commonest cause is malaria, particularly travellers returning from subSaharan Africa.

Malaria is the most important potentially fatal disease to diagnose (Johnston et al, 2009).

Other infections such as HIV, mononucleosis, leptospirosis,
schistosomiasis, amoebic liver abscess, brucellosis and toxoplasmosis should be considered and advice from infectious diseases units is advised unless the cause is quickly apparent.

Of 42 173 travellers returning to GeoSentinel sites*,
respiratory tract infections were diagnosed in 10%. Most
of these were caused by pathogens with a worldwide
distribution such as influenza and those which commonly
cause pneumonia (Leder et al, 2013).

*Geosentinal – “the Global Surveillance Network of the International Society Of Travel Medicine (ISTM) In Partnership With The CDC.”

Upper respiratory infections are usually viral or caused
by bacteria such as Streptococcus and Haemophilus as found
in the UK. Viral and bacterial throat swabs should be sent.
As well as these bacteria, causes of lower respiratory tract
infections include Mycoplasma pneumoniae, Chlamydia
pneumoniae, Legionella and respiratory syncytial virus.
Less prevalent pathogens such as Staphylococcus aureus,
avian influenza viruses and Middle East respiratory
syndrome coronavirus must be considered, as well as
other pathogens that do not usually cause pneumonia,
such as malaria (Rello et al, 2016). Pulmonary oedema
is a complication of severe malaria (Johnston et al,
2009) and cautious fluid rehydration is needed in
patients suspected of having malaria who have respiratory
symptoms.

Influenza A and B was diagnosed in 8% of returning
travellers with respiratory symptoms and should be
considered in patients who have returned less than 7 days
ago from an endemic area (Johnston et al, 2009). Note
that transmission is year-round in the tropics (Leder et al,
2013).

Avian influenza* should be considered in anyone
who has had contact with birds in an area with an
epidemic, most recently China (Public Health England,
2017).

*This link is to an article on avian influenza from emedicine.medscape.com.

Patients with fever and evidence of pneumonia and return within 14 days from the Arabian peninsula should be considered as potentially infected with Middle East respiratory syndrome coronavirus (Leblebicioglu et al, 2016). Camels are a host and human to human transmission occurs (Rello et al, 2016).

Specific neurological diagnoses in the returning traveller
are rare (Freedman et al, 2006). There is considerable
overlap, however, with other diagnostic categories as
neurological symptoms such as headache are caused by
systemic infections (particularly malaria, dengue and
chikungunya infection and rickettsial diseases).

Malaria and meningitis are the commonest treatable causes of fever and CNS symptoms and must always be excluded first
(Johnston et al, 2009).

Any patient with neurological symptoms and a history of travel to a malaria region should be urgently investigated.

In patients with meningism, common viral and bacterial causes should be considered as in the UK (Johnston et al, 2009).

Encephalitis* presents with headache, fever and/or altered mental state and is most commonly caused by herpes simplex virus in middle and high income countries (Aryee and Thwaites, 2015); specialist advice should be sought in returning travellers with this presentation in order to arrange relevant tests and initial empirical therapy as the differential is broad and outside the scope of this review.**

**Autoimmune encephalitis should always be considered as it is now said to be more common than viral encephalitis. Link is from the Genetic and Rare Disease Information Center.

This entry was posted in Infectious Diseases, Travel Medicine. Bookmark the permalink.