In this post I link to and excerpt from IBCC chapter – Disseminated Intravascular Coagulation (DIC). January 18, 2021 by Josh Farkas:

Disseminated Intravascular Coagulation (DIC) is like the ARDS of the hematological system. It’s not really one disorder, but rather a collection of different disorders with some shared features. The diagnosis and optimal treatment remain elusive.

Dr. Farkas gives us direct links to each part of his DIC chapter:

The fundamental pathophysiologic signature of DIC is widespread, uncontrolled clot formation.  Clotting may be initiated by a variety of factors (e.g., bacterial lipopolysaccharides, tissue factor released by monocytes or the placenta, or damage to the endothelial glycocalyx).

Different causes of DIC tend to cause different problems.  Infection and septic shock tend to cause a more prothrombotic form of DIC, which predominantly causes excess clot formation.  Alternatively, DIC due to obstetric catastrophes or leukemia tends to cause depletion of fibrinogen leading to hemorrhage.  Consequently, DIC is not a monolithic construct – and appropriate treatment often depends on understanding the context.

DIC may be asymptomatic, or it may cause bleeding and clotting.  Symptoms may be dominated by either bleeding or clotting.

Certain forms of DIC tend to cause predominantly thrombosis or hemorrhage – these are indicated below.

sepsis due to a wide variety of pathogens, most notably: 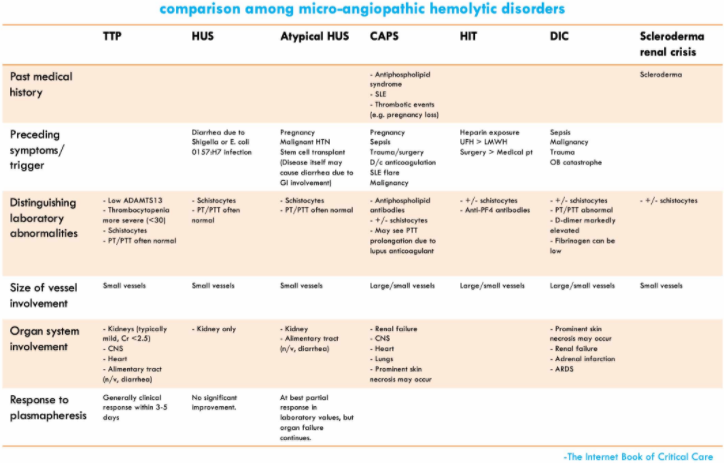 DIC is a clinical diagnosis

This entry was posted in Hematology, Internet Book Of Critical Care By Dr. Farkas. Bookmark the permalink.