Does learning cardiology give you palpitations? Not to worry, Dr. Mike Fahey returns to address all your concerns about supraventricular tachycardia. He teaches us about cardiac conduction, Wolf-Parkinson-White, and more in this shocking episode. 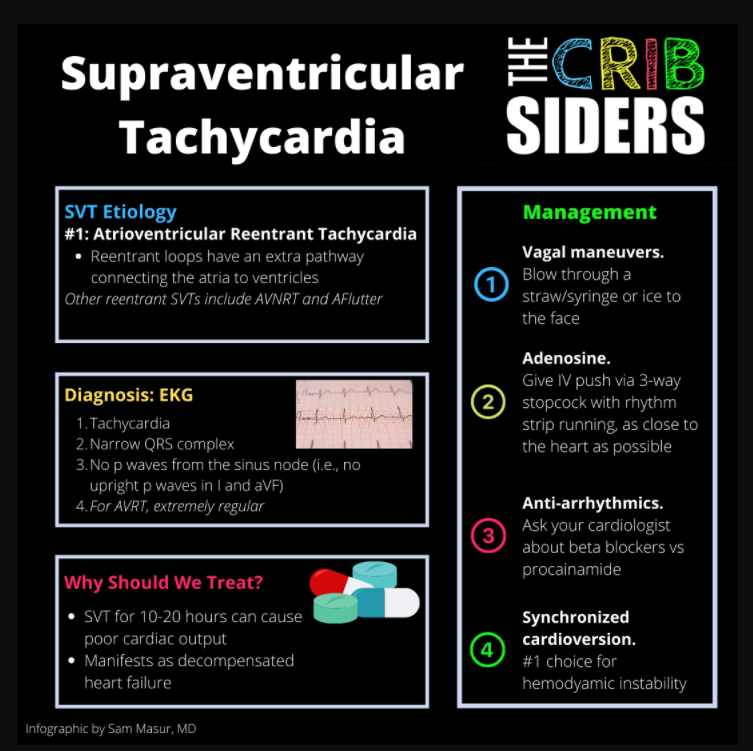 Conduction begins from the sinus node in the high right atrium. The sinus node has the fastest automaticity and it doesn’t need any stimulus to depolarize. After depolarization, the electrical stimulus travels through the atria towards the ventricles, but cannot pass across due to the fibrous ring electrically insulating the structures. The AV Node is the crossing point, where the stimulus waits a split second, and then rapidly travels down the His-Purkinje system to depolarize the ventricles in a very short amount of time. The signal would eventually make its way back to the atria, but it cannot due to the fibrous ring. Once depolarized, every myocyte goes into its refractory state, and the process starts all over again. If you work someone to their limits, the fastest physiologic heart rate is considered to be 220 – age (years).

If you see a narrow QRS, you know the electrical stimulus came through the AV node and traveled down a functional His-Purkinje system.

The most common form of SVT in kids is Atrio-Ventricular Reentrant Tachycardia (AVRT). In AVRT, there is an extra pathway (accessory) that connects the atria and ventricles other than the AV node and His-Purkinje system. Thus, electricity continues to loop through the atria and ventricles along the His-Purkinje system and accessory pathway. The prototypical cause of AVRT is Wolff-Parkinson-White Syndrome (WPW).

Another form of SVT that often gets confused with AVRT is Atrio-Ventricular Nodal Reentrant Tachycardia (AVNRT). In AVNRT, the reentrant loop happens within the AV node itself rather than through an extra pathway.

One of the rarest forms of reentrant SVT in pediatrics is Atrial Flutter, which is occasionally seen in infants. This reentry loop exists entirely within the atria.

Although less prevalent than reentrant tachycardias, the most common form of automatic tachycardia is Ectopic Atrial Tachycardia (EAT). In EAT, there is an electrical signal coming from another part of the atria that beats faster than the sinus node.

Ultimately, the diagnosis is contingent upon the EKG. The following are the most common EKG findings in retrograde AVRT:

Note: it is very difficult to discern AVRT from AVNRT on EKG. This is a job for an electrophysiologist.

The remainder of testing is often completed once the arrhythmia has been treated (see below). Echocardiogram is recommended, as patients with SVT have a higher incidence of congenital heart disease (JAMA 2009). Dr. Fahey recommends checking a TSH in patients with atrial fibrillation, atrial flutter, or rarer forms of pediatric SVT.

Why Should We Treat?

SVT is often not immediately dangerous, unless at very high heart rates (above maximum physiologic heart rate). The concern is directly proportional to the heart rate. In general, Dr. Fahey becomes worried about decreased cardiac output when a child has been in SVT for 10-20 hours or more. This would manifest as signs and symptoms of decompensated heart failure as above. For those children who find themselves with decreased cardiac output for a prolonged period of time, they can develop residual ventricular dysfunction, called tachycardia-induced cardiomyopathy.

The vagus nerve works to slow sinus node automaticity and AV nodal conduction. Once AV nodal conduction is slowed, re-entrant loops involving the AV node will hit a new refractory period, causing the electrical signal to stop. Once that circuit breaks, the next electrical impulse will come from the automatic sinus node, the area with the most automaticity. Vagal maneuvers are exercises that can be performed to stimulate the vagus nerve and increase vagal tone. The following are commonly used maneuvers:

Note: most older children with previous episodes of SVT know works the best for them

Adenosine works by shutting down the AV node completely. Any reentrant tachyarrhythmia that utilizes the AV node as part of the circuit should be broken with adenosine. The following must be performed when giving adenosine:

If adenosine does not work, it is unlikely that there is a reentrant loop that includes the AV node. This often happens in atrial flutter or automatic tachycardias, such as EAT or atrial fibrillation.

Dr. Fahey’s decision to give more adenosine is based on the rhythm the patient is in. This is why the concurrent rhythm strip is so important. He will likely try one extra dose of the full adenosine just in case there was an unlucky aberrant beat that put the patient right back into the tachyarrhythmia.

If adenosine is ineffective, the conduction system of the heart must be changed in a more systemic manner. This is often called chemical cardioversion. Dr. Fahey’s next antiarrhythmic is often a beta blocker. Other types of antiarrhythmic agents are often chosen by local cardiologist preference, as there is little data comparing these medicines head-to-head in children. Examples include procainamide, sotalol, or flecainide. All antiarrhythmics are also pro-arrhythmic, so the more powerful the antiarrhythmic, the higher potential for triggering other nastier arrhythmias.

In general, any hemodynamically unstable child in a supraventricular tachycardia should be electrically cardioverted as soon as possible. Electrical cardioversion works by delivering an electrical signal to every myocyte, causing them all to depolarize at the same time. Thus, every myocyte enters a refractory period, and then the most automatic signal in the heart starts back up again – the sinus node.

Electricity, in contrast to adenosine, will work for every reentrant rhythm as it affects every myocyte in the heart. In the stable patient, electrical cardioversion is often reserved for patients who can’t get IV access, but this is very rare.

The diagnosis of WPW is successfully made with purely the EKG findings (and it only needs to be captured once!) Importantly, these findings will only be seen when the patient is out of SVT, as most patients are in retrograde AVRT.