Links To And Excerpts From The Left Atrial Septal Pouch: A New Stroke Risk Factor?

Here is a list of 101 articles similar to the above article from PubMed.

The left atrial septal pouch (LASP) occurs due to incomplete fusion of septa primum and secundum at the inter-atrial septum, creating an open flap that may serve as a thromboembolic source. Prior studies have demonstrated increased prevalence of LASP in cryptogenic strokes. The aim of the current study was to validate the above findings in a separate, larger group of stroke and non-stroke patients. We examined transesophageal echocardiograms (TEEs) performed between July 2011 and December 2018. LASP prevalence was determined in TEEs referred for ischemic stroke or transient ischemic attack (“stroke”) and compared with LASP prevalence in patients undergoing TEEs for other reasons (“non-stroke”). Stroke subtyping was performed using the Trial of Org 10172 in Acute Stroke Treatment (TOAST) criteria. There were 306 TEEs from 144 non-stroke and 162 stroke patients. Mean age and sex distribution were 56 ± 1 (mean ± SE) and 65% male in the non-stroke group and 58 ± 1 and 54% male in the stroke group. The overall prevalence of LASP was 31%. The prevalence of LASP was 28% (41/144) in non-stroke patients, 25% (24/95) in non-cryptogenic stroke patients, and 43% (29/67) in cryptogenic stroke patients. LASP prevalence was significantly higher in the cryptogenic subgroup compared with the non-cryptogenic subgroup (p = 0.02). These findings demonstrate a significant association of LASP with risk of cryptogenic stroke, suggesting that LASP may serve as a thromboembolic nidus. Additional studies are needed to determine the generalizability of these findings, and their therapeutic implications, supporting LASP as a stroke risk factor.

Cryptogenic strokes account for up to 30–40% of all ischemic
strokes, and a significant subset is thought to originate from distant emboli despite exclusion of arrhythmias and intracardiac thrombus [1].

These infarcts are categorized as embolic strokes of undetermined source (ESUS), and their pathophysiology remains incompletely understood.

In these studies, presence or absence of structural or functional abnormalities of the left atrium that may promote thromboembolism independent of atrial arrhythmias was not examined.

Indeed, left atrial dysfunction has been found to be more prevalent in ESUS than in other stroke subtypes [5, 6].

Examination of the left atrial structure may help elucidate a
mechanism underlying ESUS or cryptogenic stroke.

The anatomic variant known as the left atrial septal pouch (LASP) is of special interest as a possible source of emboli in cryptogenic strokes.

LASP was first described in 2010 by Krishnan and Salazar as a unique anatomic entity that occurs with incomplete fusion of the inter-atrial septum [7].

In utero, a separation between septum primum and septum secundum allows for flow of oxygenated maternal blood into the fetal systemic circulation while bypassing pulmonary circulation.

After birth, the left atrial pressure increases causing the gap between the septum primum and secundum to close and fuse over time.

However, in 20–30% of adults, the two septa fail to fuse,
leading to patent foramen ovale (PFO).

As proposed by Hołda et al., a septal pouch results from partial fusion of a long PFO channel. This forms a diverticulum with a free edge or flap of one septum opening either into the right, left,  or both atria [8]. LASP specifically results from fusion just at the caudal edge of the PFO channel, resulting in an opening towards the left atrium (Fig. 1).

Nearly 40% of adults were observed to have LASP in the original study described by Krishnan and Salazar, although subsequent studies report varying prevalence of 11-42% [8]. The pouch-like structure of LASP can serve as a potential site of thrombus formation, especially in conditions prone to stasis in the left atrium, such as in atrial cardiopathy, atrial fibrillation, or mitral stenosis.

Since the initial reporting of LASP, a series of case studies
have shown thrombus attachment to the LASP, including some instances in patients with strokes [9–11].

However, clearly linking the LASP with cryptogenic stroke has been more challenging.

Results from previous retrospective studies have been mixed, with some showing a positive association between LASP and cryptogenic stroke [12–14] and others failing to demonstrate such a relationship [15–17].

Although a recent meta-analysis supports a positive association between LASP and cryptogenic stroke [18], interpreting the data collectively from these studies is limited due to multiple factors,
including small sample sizes, heterogeneous patient populations, and widely varying LASP prevalence, which may reflect technical limitations of different imaging modalities used
for visualizing the inter-atrial septum.

The aim of the current study was to investigate the relationship between presence of LASP and stroke in a large, well-defined population of patients with stroke and control subjects who underwent transesophageal echocardiography (TEE).

This was a cross-sectional retrospective study in which all
patients who underwent consecutive TEE studies at the
University of California Irvine Medical Center between
July 2011 to December 2018 were screened for inclusion
criteria.

All consecutive TEE studies with the indication
“stroke,” “CVA” (cerebrovascular accident), or “TIA” (transient ischemic attack) in the order requisition were included
for this study in the “stroke group.”

The “non-stroke group” was a subset of TEE studies from the same time period that did not specify “stroke,” “CVA,” or “TIA” as an indication.

The TEE images were evaluated for the presence of LASP,
atrial septal defects (ASD), or PFO by a cardiology team composed of cardiology fellows and a senior medical resident,
who were blinded to the patient demographics and other clinical information including stroke subtyping (inter-observer
agreement 77–97%).

An attending cardiologist and Director of the Echocardiography Laboratory (JKK), also blinded to patient information, confirmed the presence of LASP, and only in those with concordance with the original reviewer were included in the study.

LASP was defined as the fusion of septum primum
and septum secundum at the caudal end with an open “flap”
that created a septal pouch with the opening directed towards
the left atrium, and the absence of ASD and PFO.

ASD or PFO was excluded by evaluating the morphology of the interatrial septum in 2D views, color Doppler echocardiography, and agitated saline injection with and without Valsalva maneuver to confirm absence of inter-atrial shunt; as in prior studies [12–16], patients with ASD or PFO were excluded from the analysis.

All ischemic strokes were further subtyped by a vascular neurologist and by a cerebrovascular fellow in accordance with the modified Trial of Org 10172 in Acute Stroke Treatment (TOAST) criteria (inter-observer agreement 96%, kappa coefficient 0.92) [12, 19].

We compared differences in patient characteristics in non-stroke vs. stroke patients, LASP vs. non-LASP patients, and cryptogenic vs. non-cryptogenic stroke patients, using the chi-square test of proportions for categorical variables (Fisher’s exact test for 2 × 2 tables) and t tests for continuous variables.

All tests were two-sided, and a p value < 0.05 was considered statistically significant. Univariate and multivariate odds ratio (OR) for stroke and cryptogenic stroke was determined in patients with LASP vs. no LASP.

LASP was present in 41 (28%) non-stroke patients compared with 53
(33%) stroke patients (p = 0.46). Table 2 shows the patient
characteristics by the presence or absence of LASP. There
was no statistically significant difference between patients with
and without LASP in regard to age, sex, or medical history.

We further evaluated the relationship between LASP and different stroke subtypes based on the modified TOAST criteria (Table 3, Fig. 2). 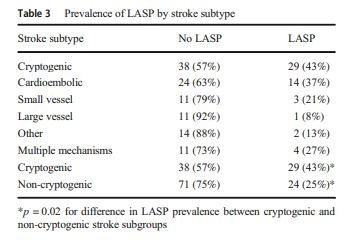 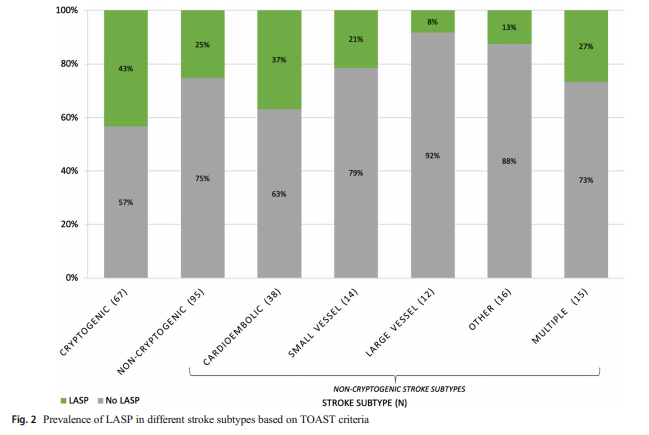 This entry was posted in Medical News, Neurology, Stroke. Bookmark the permalink.