Links To And Excerpts From “Third universal definition of myocardial infarction” 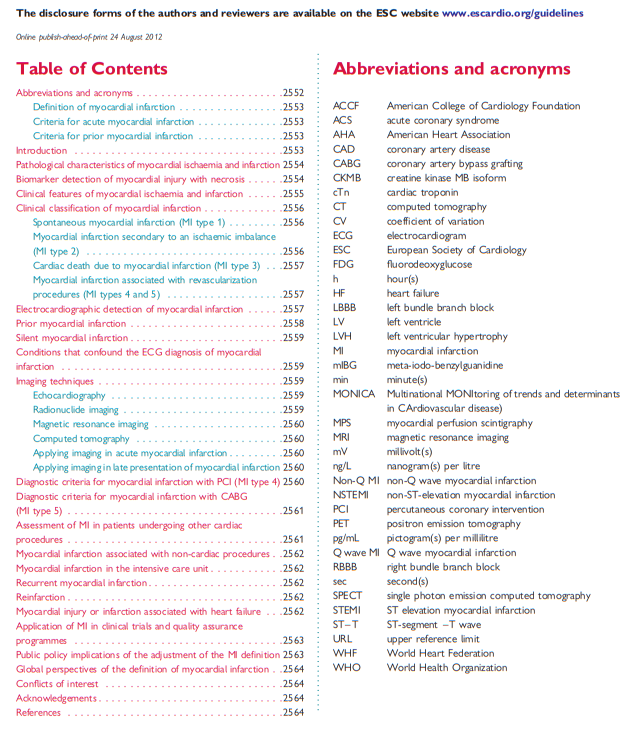 Myocardial infarction (MI) can be recognised by clinical features, including electrocardiographic (ECG) findings, elevated values of biochemical markers (biomarkers) of myocardial necrosis, and by imaging, or may be defined by pathology. It is a major cause of death and disability worldwide

. The Third Global MI Task Force has .  .  .    now recognizes that very small amounts of myocardial injury or necrosis can be detected by biochemical markers and/or imaging. 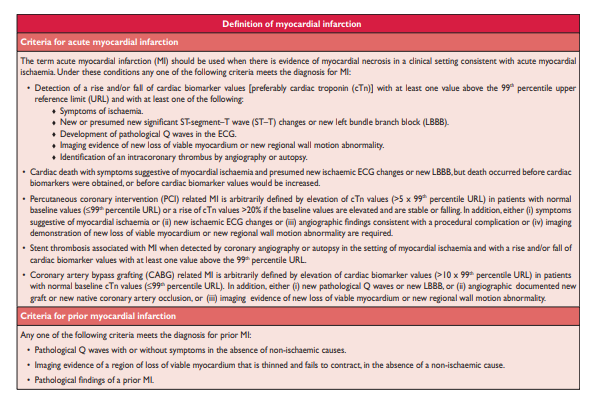 MI is defined in pathology as myocardial cell death due to prolonged ischaemia.  .  .  .  .  Complete necrosis of myocardial cells at risk requires at least 2–4 h, or longer, depending on the presence of collateral circulation to the ischaemic zone, persistent or intermittent coronary arterial occlusion, the sensitivity of the myocytes to ischaemia, preconditioning, and individual demand for oxygen and nutrients.2 The entire process leading to a healed infarction usually takes at least
5–6 weeks. Reperfusion may alter the macroscopic and microscopic appearance.

Biomarker detection of myocardial injury with necrosis kinase (CKMB) are increased.  .  .  .  Regardless of the pathobiology, myocardial necrosis due to myocardial ischaemia is designated as MI.

Also, histological evidence of myocardial injury with necrosis
may be detectable in clinical conditions associated with predominantly non-ischaemic myocardial injury. Small amounts of myocardial injury with necrosis may be detected, which are associated with heart failure (HF), renal failure, myocarditis, arrhythmias, pulmonary embolism or otherwise uneventful percutaneous or surgical coronary procedures. These should not be labelled as MI or a complication of the procedures, but rather as myocardial injury, as illustrated in Figure 1.  .  .  .   In this setting, it is important to distinguish acute causes of cTn elevation, which require a rise and/or fall of cTn values, from chronic elevations that tend not to change acutely. A list of such clinical circumstances associated with elevated values of cTn is presented in Table 1. The multifactorial contributions resulting in the myocardial injury should be described in the patient record. 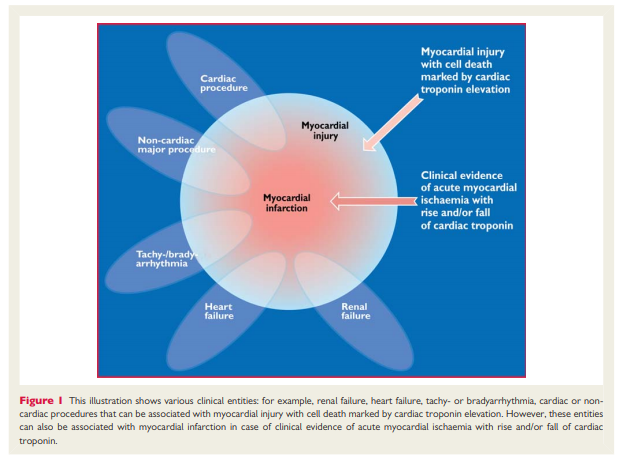 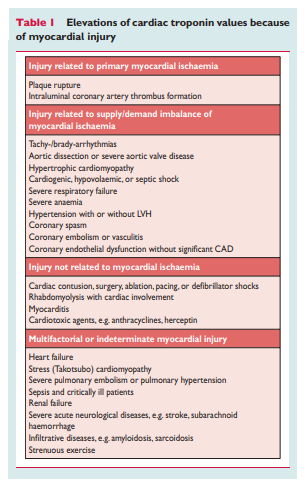 The preferred biomarker—overall and for each specific category
of MI—is cTn (I or T), which has high myocardial tissue specificity as well as high clinical sensitivity. Detection of a rise and/or fall of the measurements is essential to the diagnosis of acute MI.7 An increased cTn concentration is defined as a value exceeding the 99th percentile of a normal reference population [upper reference limit (URL)]. This discriminatory 99th percentile is designated as the decision level for the diagnosis of MI and must be determined for each specific assay with appropriate quality control in each laboratory.8,9

Values should be presented as nanograms per litre (ng/L) or
picograms per millilitre (pg/mL) to make whole numbers.  .  .  .   Optimal precision, as described by coefficient of variation (CV) at the 99th percentile URL for each assay, should be defined as ≤10%. Better precision (CV ≤10%) allows for more sensitive assays and facilitates the detection of changing values.13

Blood samples for the measurement of cTn should be drawn on
first assessment and repeated 3–6 h later. Later samples are
required if further ischaemic episodes occur, or when the timing
of the initial symptoms is unclear.14 To establish the diagnosis of MI, a rise and/or fall in values with at least one value above the decision level is required, coupled with a strong pre-test likelihood. The demonstration of a rising and/or falling pattern is needed to distinguish acute- from chronic elevations in cTn concentrations that are associated with structural heart disease.10,11,15 – 19

Blood samples for the measurement of cTn should be drawn on
first assessment and repeated 3–6 h later. Later samples are
required if further ischaemic episodes occur, or when the timing
of the initial symptoms is unclear.14 To establish the diagnosis of MI, a rise and/or fall in values with at least one value above the decision level is required, coupled with a strong pre-test likelihood. The demonstration of a rising and/or falling pattern is needed to distinguish acute- from chronic elevations in cTn concentrations that are associated with structural heart disease.10,11,15 – 19 For example, patients with renal failure or HF can have significant chronic elevations in cTn. These elevations can be marked, as seen in many patients with MI, but do not change acutely.7 However, a rising or falling pattern is not absolutely necessary to make the diagnosis of MI if a patient with a high pre-test risk of MI presents late after symptom onset; for example, near the peak of the cTn time-concentration curve or on the slow-declining portion of that curve, when detecting a changing pattern can be problematic. Values may remain elevated for 2 weeks or more following the onset of myocyte necrosis.10

An elevated cTn value (>99th percentile URL), with or without a dynamic pattern of values or in the absence of clinical evidence of ischaemia, should prompt a search for other diagnoses associated with myocardial injury, such as myocarditis, aortic dissection, pulmonary embolism, or HF. Renal failure and other more non-ischaemic chronic disease states, that can be
associated with elevated cTn levels, are listed in Table 1. [Above]
10,11

Myocardial ischaemia in a clinical setting can usually be identified from the patient’s history and from the ECG.  .  .  .  The discomfort associated with acute MI usually lasts >20 min.  .  .  .   [The symptoms] may be misdiagnosed and attributed to gastrointestinal, neurological, pulmonary or musculoskeletal disorders. MI may occur with atypical symptoms—such as palpitations or cardiac arrest—or even without symptoms; for example in women, the elderly, diabetics, or post-operative and critically ill patients.2 Careful evaluation of these patients is advised, especially when there is a rising and/or falling pattern of cardiac biomarkers.

For the sake of immediate treatment strategies, such as reperfusion therapy, it is usual practice to designate MI in patients with chest discomfort, or other ischaemic symptoms that develop ST elevation in two contiguous leads (see ECG section), as an ‘ST elevation MI’ (STEMI). In contrast, patients without ST elevation at presentation are usually designated as having a ‘non-ST elevation MI’ (NSTEMI). Many patients with MI develop Q waves (Q wave MI), but others do not (non-Q MI). Patients without elevated biomarker values can be diagnosed as having unstable angina. In addition to these categories, MI is classified into various types, based on pathological, clinical and prognostic differences, along with different treatment strategies (Table 2). 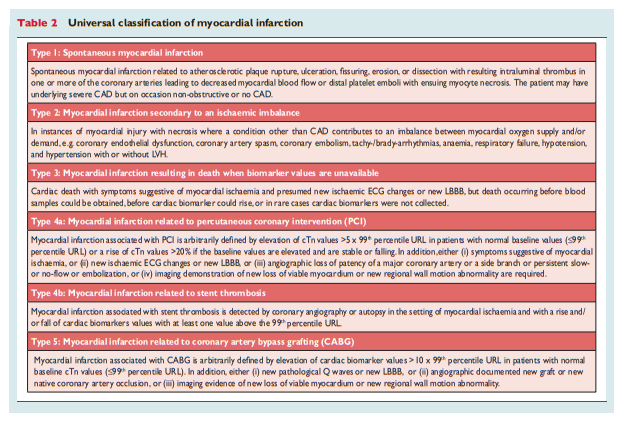 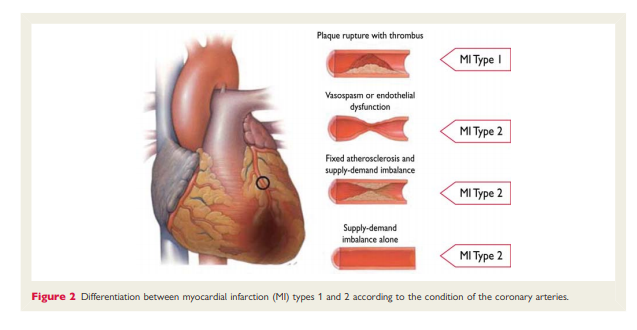 Imaging techniques can be useful in the diagnosis of acute MI
because of their ability to detect wall motion abnormalities or
loss of viable myocardium in the presence of elevated cardiac biomarker values. If, for some reason, biomarkers have not been measured or may have normalized, demonstration of new loss of myocardial viability in the absence of non-ischaemic causes
meets the criteria for MI. Normal function and viability have a
very high negative predictive value and practically exclude acute MI.63 Thus, imaging techniques are useful for early triage and discharge of patients with suspected MI. However, if biomarkers have been measured at appropriate times and are normal, this excludes an acute MI and takes precedence over the imaging criteria.

In case of late presentation after suspected MI, the presence of regional wall motion abnormality, thinning or scar in the absence of non-ischaemic causes, provides evidence of past MI. The high resolution and specificity of late gadolinium enhancement MRI for the
detection of myocardial fibrosis has made this a very valuable technique. In particular, the ability to distinguish between subendocardial and other patterns of fibrosis provides a differentiation between ischaemic heart disease and other myocardial abnormalities. Imaging techniques are also useful for risk stratification after a definitive diagnosis of MI. The detection of residual or remote ischaemia and/or ventricular dysfunction provides powerful indicators of later outcome.