In this post, I link to and excerpt from Pediatric EM Morsels‘ Dexmedetomidine for Sedation in Pediatric ED. DR SEAN M. FOX, JANUARY 28, 2022.

All that follows is from the above outstanding resource. 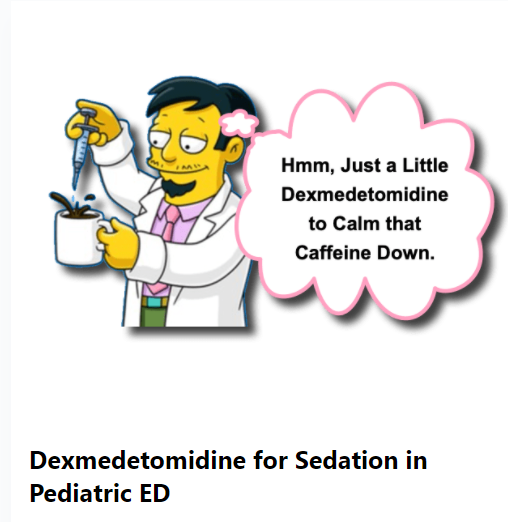 Keeping patients (and family members) calm and comfortable is an important aspect of having a successful shift. It is also challenging to do in our unique and chaotic environments (AKA The ED). We have discussed several options and strategies to help achieve the calm atmosphere we all desire (ex, Nitrous Oxide, Ketamine for Analgesia, Ketofol, Intranasal Medications), but recently we have been hearing about another option. Let us take a minute to digest a morsel on Dexmedetomidine for Sedation in the Pediatric ED:

Dexmedetomidine is an alpha-2 agonist.

Dexmedetomidine is not perfect (nothing ever is) but it is safe.

Dexmedetomidine can be used by various routes including Intranasal!

Moral of the Morsel

This entry was posted in Peds EM Morsels, Procedural Sedation and Analgesia. Bookmark the permalink.