Pertussis – A Summary From The Pink Book of The CDC

In addition to this post please see Pertussis In Infants and Children – What Can We Do To Prevent Tragedy? Posted on June 23, 2014 and Do You Or Your Child Have Whooping Cough? Here’s How to Tell Posted on February 10, 2012

Everything in this post is from Pink Book’s Chapter on Pertussis pp 261-278 from Epidemiology & Prevention of Vaccine-Preventable Diseases textbook 13th Ed. (2015) What follows are some excerpts from that chapter:

Pertussis remains a major health problem among children
in developing countries, with 195,000 deaths resulting from
the disease in 2008 (World Health Organization estimate).

The first stage, the catarrhal stage, is characterized by the
insidious onset of coryza (runny nose), sneezing, low-grade
fever, and a mild, occasional cough, similar to the common
cold. The cough gradually becomes more severe, and after
1–2 weeks, the second, or paroxysmal stage, begins. Fever is
generally minimal throughout the course of the illness.

It is during the paroxysmal stage that the diagnosis of
pertussis is usually suspected. Characteristically, the patient
has bursts, or paroxysms, of numerous, rapid coughs,
apparently due to difficulty expelling thick mucus from the
tracheobronchial tree. At the end of the paroxysm, a long
inspiratory effort is usually accompanied by a characteristic
high-pitched whoop. During such an attack, the patient may
become cyanotic (turn blue). Children and young infants,
especially, appear very ill and distressed. Vomiting and
exhaustion commonly follow the episode. The person does
not appear to be ill between attacks.

Paroxysmal attacks occur more frequently at night, with
an average of 15 attacks per 24 hours. During the first 1
or 2 weeks of this stage, the attacks increase in frequency,
remain at the same level for 2 to 3 weeks, and then gradually
decrease. The paroxysmal stage usually lasts 1 to 6 weeks
but may persist for up to 10 weeks. Infants younger than 6
months of age may not have the strength to have a whoop,
but they do have paroxysms of coughing.

In the convalescent stage, recovery is gradual. The cough
becomes less paroxysmal and disappears in 2 to 3 weeks.
However, paroxysms often recur with subsequent respiratory
infections for many months after the onset of pertussis.

Adolescents, adults and children partially protected by the
vaccine may become infected with B. pertussis but may have
milder disease than infants and young children. Pertussis
infection in these persons may be asymptomatic, or present
as illness ranging from a mild cough illness to classic
pertussis with persistent cough (i.e., lasting more than
7 days). Inspiratory whoop is not common.

Even though the disease may be milder in older persons, those who are infected may transmit the disease to other susceptible persons, including unimmunized or incompletely immunized infants. Older persons are often found to have the first case in a household with multiple pertussis cases, and are often the source of infection for children. [Emphasis Added]

Complications
The most common complication, and the cause of most
pertussis-related deaths, is secondary bacterial pneumonia.
Young infants are at highest risk for acquiring pertussis-associated complications. Data from 1997–2000 indicate
that pneumonia occurred in 5.2% of all reported pertussis
cases, and among 11.8% of infants younger than 6 months
of age.

Pertussis Among Children, Adolescents and Adults
● Disease often milder than in infants and young children
● Infection may be asymptomatic, or may present as classic pertussis
● Persons with mild disease may transmit the infection
● Older persons often source of infection for children 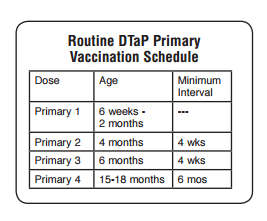 Tdap Recommendations
● A single dose of Tdap is recommended for
■ adolescents 11 through 18 years of age
■ adults 19 and older
■ children 7-10 years of age who are not fully vaccinated against pertussis*
* “Not fully vaccinated” against pertussis is defined as having received fewer than 4 doses of DTaP, or having received 4 doses of DTaP but the last dose was prior to age 4 years. See MMWR 2011;60(No.1):13-5.

Tdap Recommendations for Pregnant Women
● Providers of prenatal care should implement a Tdapvaccination program for pregnant women who previously have not received Tdap
● Administer Tdap in each pregnancy, preferably at 27 through 36 weeks gestation
● If not administered during pregnancy, Tdap should be administered immediately postpartum, for women not previously vaccinated with Tdap
MMWR 2013;62(No. 7):131-5

Tdap Vaccine and Healthcare Personnel
● Healthcare personnel should receive a single dose of Tdap as soon as feasible*
● Priority should be given to vaccination of healthcare personnel who have direct contact with infants 12 months of age and younger
*if they have not previously received Tdap. MMWR 2006;55(RR-17):1-37

Tdap For Persons Without A History of DTP or DTaP
● All adolescents and adults should have documentation
of having received a series of DTaP, DTP, DT, or Td
● Persons without
documentation should receive a series of 3 vaccinations
● One dose should be Tdap, preferably the first

Pediarix
● DTaP – Hep B – IPV combination
● Minimum age 6 weeks
● Approved for 3 doses at 2, 4 and 6 months
● Not approved for 4th or 5th booster dose of DTaP or IPV series
● Licensed for children 6 weeks through 6 years of age
● May be used interchangeably with other pertussis containing vaccines if necessary
● Can be given at 2, 4, and 6 months in infants who received a birth dose of
hepatitis B vaccine (total of 4 doses)
● May be used in infants whose mothers are HBsAg positive or
status is not known*
*Off-label ACIP recommendation https://www.cdc.gov/vaccines/programs/
vfc/downloads/resolutions/1003-hepb.pdf

Kinrix
Kinrix is a combination vaccine that contains DTaP and
inactivated poliovirus vaccine (IPV) that is produced by
GlaxoSmithKline. It was approved by the FDA in 2008. Kinrix
is licensed only for the fifth dose of DTaP and fourth dose
of IPV in children 4 through 6 years of age whose previous
DTaP vaccine doses have been with Infanrix and/or Pediarix
for the first three doses and Infanrix for the fourth dose.
However, if Kinrix is administered to children who received
another brand of DTaP for prior DTaP doses the Kinrix dose
does not need to be repeated. 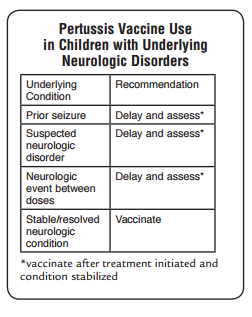