Practical Vasopressors And More In Septic Shock – Help From Drs. Farkas, Weingart, and Others

The following article, PulmCrit- Epinephrine challenge in sepsis: An empiric approach to catecholamines April 25, 2016 by Dr. Josh Farkas, has an outstanding approach to vasopressors. What follows is from this outstanding post [Read the whole post as there is much more in it–as always, these are just my study notes]:

A 55-year-old woman was admitted with toxic shock syndrome. Her norepinephrine requirement was labile, fluctuating between 15 mcg/min and 30 mcg/min. Bedside echocardiogram showed a dilated inferior vena cava without respiratory variability, and a normal ejection fraction. On examination her extremities were cool and her urine output was marginal.

Epinephrine 4 mcg/min was added, with an improvement in blood pressure, perfusion, and urine output. She reported feeling better, and over the next hour the norepinephrine was weaned off. Her lactate increased from 2 mM to 6 mM. The ICU team was pleased with this epinephrine-induced rise in lactate, a positive prognostic sign. Sure enough, she continued to improve and was weaned off vasopressors entirely over the next 18 hours.

The differences between various catecholamines results from the ratio of stimulation of alpha-receptors vs. beta-receptors (adjacent figure). However, patients vary in the responsiveness of their heart and vasculature. For example, reduced cardiac sensitivity to beta-agonists is common in advanced sepsis, due to receptor down-regulation. Refractory vasodilation is also well described. 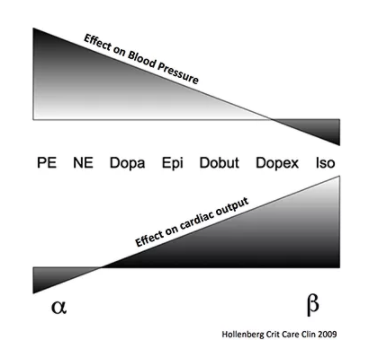 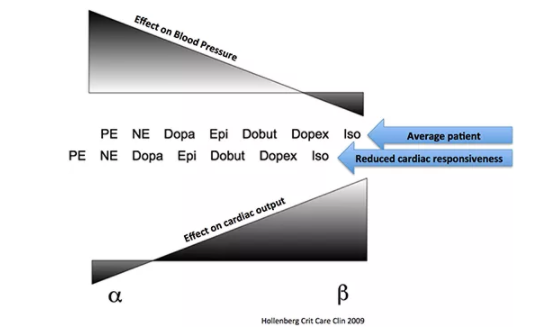 Baseline hemodynamics and echocardiography provide static hemodynamic variables which usually cannot predict epinephrine responsiveness (7).  Thus, the only way to be certain of how a patient will respond to epinephrine is to administer epinephrine.  One potential exception might be a patient with marked tachycardia and a hyperkinetic ventricle.

The best way to determine epinephrine responsiveness may be to simply start a low dose epinephrine infusion (e.g. 4 mcg/min)(8). The patient’s response to epinephrine may be judged based on clinical variables (table below). Although measuring cardiac output could also be performed, this is not my usual clinical practice (9). 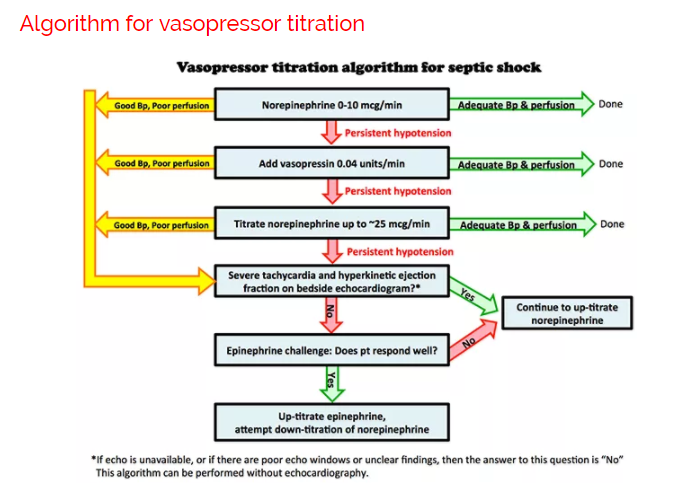 Above is one possible approach to titrating vasopressors in septic shock.  Vasopressin is started earlier than in most algorithms (10).  More notable features of the algorithm are:

You MUST diagnose shock

The choice of vasopressors is not always clear

Be sure to read all five of Dr. Farkas’ posts in Resources below for an outstanding and relatively brief review of vasopressors.

EMCrit 201 – Deeper on Vasopressors and Athos 3 with Mink Chawla [Link is to podcast and show notes] June 12, 2017 by Scott Weingart from EMCrit.org.

Podcast 138 – Vasopressor Basics [Link is to the show notes and podcast] December 1, 2014 by Scott Weingart from EMCrit.org

This entry was posted in Critical Care, Emergency Medicine. Bookmark the permalink.