Here is a link to the 2018 Cochrane article Drug management for acute tonic-clonic convulsions including convulsive status epilepticus in children [PubMed Abstract].

The following chart and excerpts are from PulmCrit- Resuscitationist’s guide to status epilepticus May 8, 2017 by Dr. Josh Farkas: 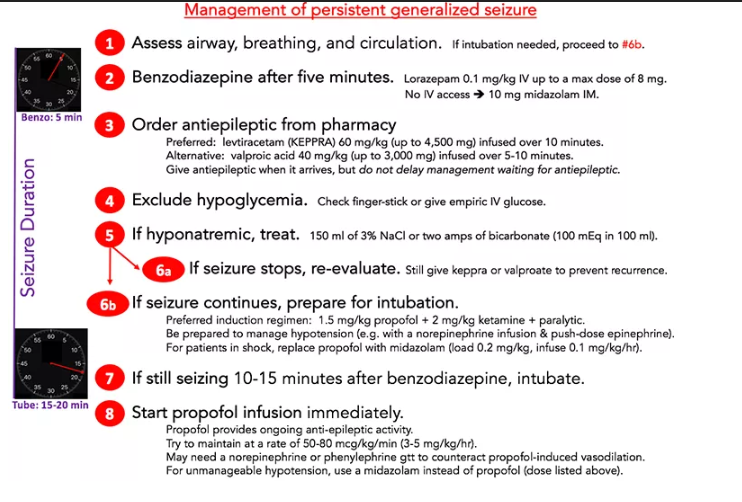 The rationale for aggressive treatment of generalized status epilepticus was described previously here.  In short, best outcomes rely upon rapid seizure control.  The longer the seizure continues, the more refractory it becomes to therapy.  The duration of status epilepticus which may cause permanent brain damage is unknown, with experts currently suggesting thirty minutes (Zaccara 2017).  Aside from the brain, persistent status epilepticus may cause aspiration, hyperkalemia, rhabdomyolysis, hyperthermia, myocardial infarction, and arrhythmia.

The role of intubation is controversial.  Neurologists tend to view intubation as a form of “treatment failure,” reflecting inability to treat the seizure with traditional anti-epileptic agents.  My opinion is that intubation is often a key therapeutic intervention to control the seizure and prevent          complications. . . .

The backbone of this algorithm is constructed from medications that are immediately available in any critical care arena (lorazepam, propofol, and ketamine).  If levetiracetam arrives from the pharmacy that’s a bonus, because the algorithm will work just fine without it.  Utilizing immediately available medications which can be bolused is the only way to reliably achieve rapid seizure control.

Generalized status epilepticus is currently defined as either:

The algorithm described here is designed for patients with persistent, ongoing generalized seizure activity.  For a patient with recurrent seizures who isn’t actively seizing, a less aggressive strategy may be used.

There are dozens of causes of status epilepticus. However, for immediate management two are the most important: hypoglycemia and hyponatremia.

Hypoglycemia must be excluded in any patient with seizure or altered mental status. This can generally be accomplished by measuring a fingerstick glucose. If fingerstick glucose can’t be obtained or is borderline, just give IV dextrose (e.g. 1-2 ampules of D50W).

Hyponatremia may also require immediate treatment. If electrolytes aren’t known, they should be measured (ideally with a point-of-care device which will provide rapid results). Hyponatremia can be treated by bolusing ~150 ml of 3% saline, with a repeat bolus for persistent seizures. However, this often takes a while to obtain from pharmacy. Two ampules of hypertonic bicarbonate provide a similar amount of hypertonic therapy, with the advantage that they are immediately available.

The following sections of Dr. Farkas’ post contain detailed information that must be reviewed [Note to myself – so read these sections in their entirety.]:

Propofol as a second-line antiepileptic agent

The rationale for propofol as a second-line anti-epileptic (rather than waiting for a conventional anti-epileptic agent) was explored in detail in a prior post.  In short, most patients who fail benzodiazepine will require intubation eventually (figure below).  Delaying intubation to allow for a trial of anti-epileptic risks prolonging the seizure and increasing associated complications.

The main disadvantage of propofol is that it causes hypotension.  This is generally manageable (e.g. with a low-dose norepinephrine or phenylephrine infusion).  However, for a patient with severe shock, propofol may not be safe.  These patients may be managed using midazolam instead (with a loading dose of 0.2 mg/kg, followed by an infusion of 0.1 mg/kg/hr)(3).

Prolonged infusion of propofol at high rates can cause propofol infusion syndrome (a highly morbid condition involving bradycardia, lactic acidosis, and shock).  This may be avoided by using propofol infusion rates below 83 mcg/kg/min (<5 mg/kg/hr) and serial monitoring of triglyceride levels (4).

Ketamine as an adjunctive antiepileptic agent

Choice of paralytic for intubation

The ideal paralytic for status epilepticus is controversial. [Review this entire section in Dr. Farkas’ post for help in making your decision.]

We have not identified any new high-quality evidence on the efficacy or safety of an anticonvulsant in stopping an acute tonic-clonic convulsion that would inform clinical practice. There appears to be a very low risk of adverse events, specifically respiratory depression. Intravenous lorazepam and diazepam appear to be associated with similar rates of seizure cessation and respiratory depression. Although intravenous lorazepam and intravenous diazepam lead to more rapid seizure cessation, the time taken to obtain intravenous access may undermine this effect. In the absence of intravenous access, buccal midazolam or rectal diazepam are therefore acceptable first-line anticonvulsants for the treatment of an acute tonic-clonic convulsion that has lasted at least five minutes. There is no evidence provided by this review to support the use of intranasal midazolam or lorazepam as alternatives to buccal midazolam or rectal diazepam.

Returning to Dr. Farkas post, Dr. Farkas includes the following chart and resource in his post from the 2016 American Society of Epilepsy Guidelines:

The most recent guidelines by the American Epilepsy Society are shown here (Glauser 2016): 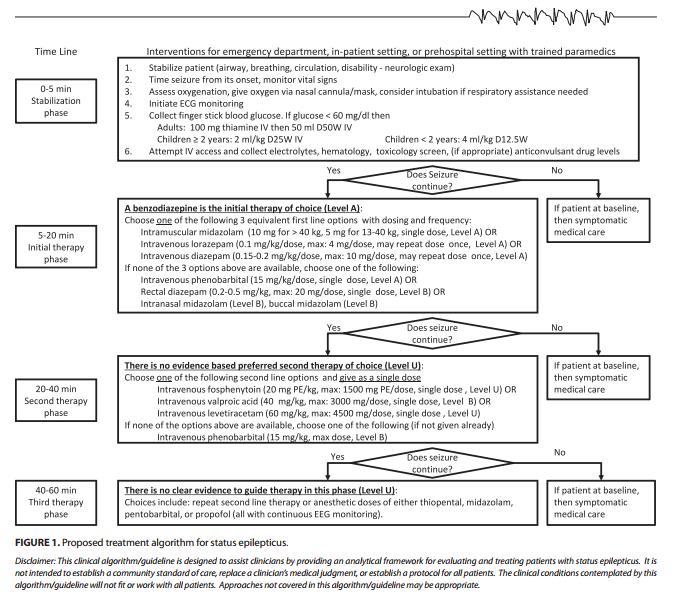 These guidelines note that “depending on the etiology or severity of the seizure, patients may go through the phases faster or even skip the second phase and move rapidly to the third phase, especially in sick or intensive care unit patients.” Therefore, the algorithm proposed above is fundamentally consistent with these guidelines.

As always, these are just my study notes and do not cover everything Dr. Farkas discusses in hist post [meaning read his complete post here].

Specifically his foot notes, FOAM resources, and his reader comments and his replies must be read to get the full value out of his post.