The 2019 CPS Guidelines On Dx And Rx Of Neonatal Hypoglycemia

In this post there are links to the 2019 Canadian Peadiatric Society [Link is to the CPS home page] Guidelines on Neonatal Hypoglycemia – The screening and management of newborns at risk for low blood glucose, Nov 20 2019.

The place to start is Neonatal Hypoglycaemia – CPS Podcast  [Link is to the podcast] by Carina Lauzon Nov 25, 2019 from PedsCases: [Home Page of PedsCases] and here is the link to the Transcript of this podcast:

This CPS podcast gives an organized approach to neonatal hypoglycaemia, the most common metabolic problem in neonates and the leading cause of admissions to the NICU. This podcast is based on the 2019 Canadian Paediatric Society Statement, “The screening and management of newborns at risk for low blood glucose.” It was created by Carina Lauzon, a fourth-year medical student, with Dr. Michael Narvey, co-author of this CPS statement, and neonatologist Dr. Marc-Antoine Landry.

Here are excerpts from the podcast script:

3. There are two main categories of symptoms of neonatal hypoglycaemia. The neurogenic symptoms include jitteriness, pallor, temperature instability, irritability, and tachycardia. The neuroglycopenic symptoms include apneic episodes, episodes of cyanosis, hypotonia, unresponsiveness, lethargy, seizures, a weak or high-pitched cry, and coma that may lead to death if the hypoglycaemia is notcorrected.

4. Infants should be tested for neonatal hypoglycaemia immediately if they are symptomatic or unwell. Infants with risk factors for neonatal hypoglycaemia should be screened at 2 hours of age and every 3-6 hours after that, prior to feeds. Testing can be discontinued after 12 hours of age if LGA or infant of diabetic mother, or 24 hours if SGA, IUGR, or preterm, if blood glucose levels remain >2.6 mmol/L.

5. For asymptomatic infants with blood glucose levels under 2.6 mmol/L, initial treatment should include increased frequency of feeding and supplementation with 40% dextrose gel along with a feed. Alternatively, a measured volume of 5 ml/kg of feed along with breastfeeding may be offered. If this is not successful in raising blood glucose levels, IV dextrose therapy should be considered. For infants with symptomatic hypoglycaemia, IV dextrose therapy should be initiated

This PedsCases Canadian Pediatric Society podcast is designed
to give an organized approach to neonatal hypoglycaemia, the most common metabolic problem in neonates and the leading cause of admissions to the neonatal intensive care unit. This podcast is based on the 2019 Canadian Pediatric Society statement, The screening and management of newborns at risk for low blood glucose.

In the healthy newborn, serum glucose levels will drop in the first 2-3 hours of life, then will spontaneously increase and subsequently be maintained by regular feedings. It is not unusual to see low blood glucose levels in the first 24-48 hours of life, as the baby adjusts to life outside the womb. This is called transitional hypoglycaemia and is seen in up to 10% of healthy term infants. In asymptomatic babies without risk factors for neonatal hypoglycaemia, which we will discuss later in the podcast, these brief periods of low blood glucose are assumed to be benign.

*See the Blood Sugar Calculator from Diabetes.co.uk. This Calculator converts mmol/L to mg/dL and mg/dL to mmol/L.

The neurogenic symptoms happen as a result of sympathetic nervous system stimulation in response to hypoglycaemia, so are also called adrenergic signs. They are the first symptoms to appear, occurring at higher blood glucose concentrations than the neuroglycopenic symptoms. The neurogenic symptoms include jitteriness, pallor, temperature instability, irritability, and tachycardia.

Because other conditions such as sepsis can cause similar symptoms to hypoglycaemia, it is important to document hypoglycaemia and confirm whether symptoms resolve with administration of glucose. [Emphasis Added]

The most important risk factors for neonatal hypoglycaemia can be grouped into three categories: babies who are too large, too small, or too sick.

Infants that fall in the “too large” category include infants who are large for gestational age (LGA, >90th percentile) and infants of diabetic mothers.

Infants who fit in the “too small” category include infants who are small for gestational age (SGA, <10th percentile), those who suffer from intrauterine growth restriction (IUGR), and those who are born prematurely (<37 weeks).

Infants who suffer from sepsis and infants of mothers with eclampsia or chorioamnionitis are also at an increased risk for hypoglycaemia. Maternal labetolol use, asphyxia and late preterm exposure to antenatal steroids are additional risk factors.

Other less common causes of neonatal hypoglycaemia include increased glucose use (which can happen as a result of hypothermia, sepsis or polycythemia), growth hormone deficiency, cortisol deficiency, inborn errors of metabolism, adrenal insufficiency, liver disease, poisonings or drugs, and systemic disease.

Because neonatal hypoglycaemia can lead to severe consequences, it is important to know which babies should be screened. For the purposes of screening, the Canadian
Pediatric Society recommends using a cut-off of 2.6 mmol/L for at risk infants in the first 72 hours of life, as blood glucose levels below this are associated with adverse outcomes, especially if persistent or repeated.

After two hours of age, if the infant is well and is not at risk for neonatal hypoglycaemia, routine care should be given, including feeding on demand. The infant should not be tested unless they become unwell.

In infants who are at risk for neonatal hypoglycaemia (LGA, infant of a diabetic mother, SGA, IUGR, or preterm), blood glucose levels should be checked at two hours of age, after at least one effective feed, and then every 3-6 hours after that, before feeds, provided that the infant remains well and glucose levels are stable.

In infants of diabetic mothers or those who are large for gestational age, hypoglycaemia usually happens within the first 12 hours of life. Therefore, glucose testing can be stopped if levels have been consistently above 2.6 mmol/L at 12 hours of age.

In infants who are small for gestational age or premature, hypoglycaemia usually happens within the first 24 hours of life. In these cases, testing can be discontinued if glucose levels are consistently above 2.6 mmol/L and regular feeds have been established by 24 hours of age. 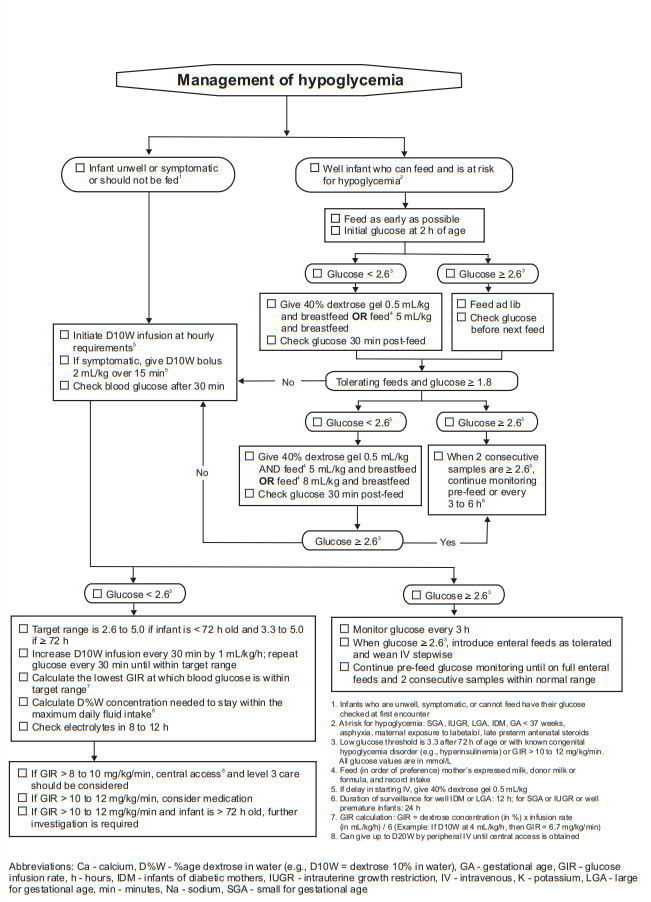