Unsuspected adrenal masses, or incidentalomas, are increasingly found with the widespread use of thoracic and abdominal imaging. These masses may be hormonally active or nonfunctional and malignant or benign. (1) 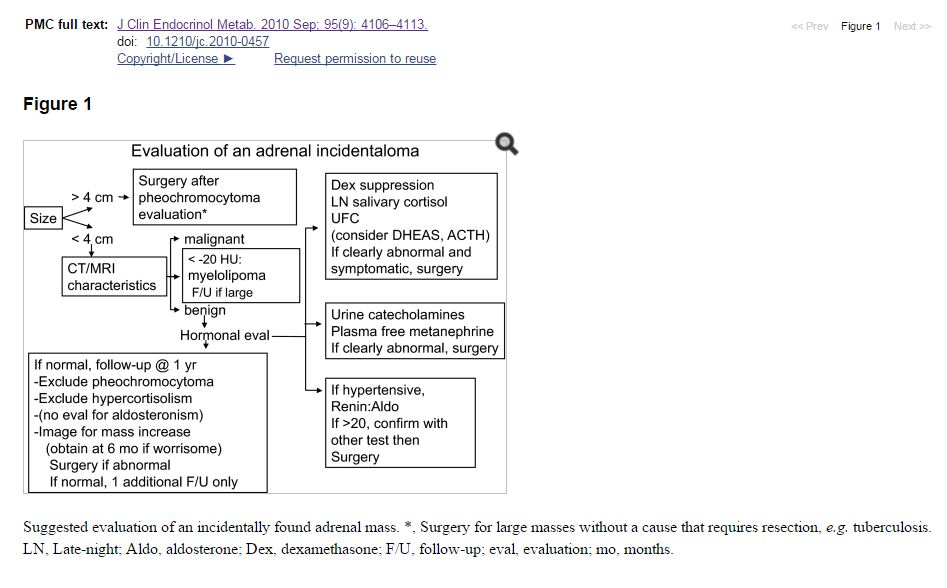 All that follows is from Reference 1:

Abstract
Unsuspected adrenal masses, or incidentalomas, are increasingly found with the widespread use of thoracic and abdominal imaging. These masses may be hormonally active or nonfunctional and malignant or benign. Clinicians must determine the nature of the mass to decide what treatment, if any, is needed. Measurement of precontrast Hounsfield units (HU) and contrast washout on computed tomography scan provide useful diagnostic information. All patients should undergo biochemical testing for pheochromocytoma, either with plasma or urinary catecholamine measurements. This is particularly important before surgical resection, which is routinely recommended for masses larger than 4 cm in diameter without a clear-cut diagnosis and for others with hormonal secretion or ominous imaging characteristics. Hypertensive patients should undergo biochemical testing for hyperaldosteronism. Patients with features consistent with Cushing’s syndrome, such as glucose intolerance, weight gain, and unexplained osteopenia, should be evaluated for cortisol excess. Here, the dexamethasone suppression test and late-night salivary cortisol may be preferred over measurement of urine cortisol. The ability of surgical resection to reverse features of mild hypercortisolism is not well established. For masses that appear to be benign (<10 HU; washout, >50%), small (<3 cm), and completely nonfunctioning, imaging and biochemical reevaluation (pheochromocytoma and hypercortisolism only) at 1–2 yr (or more) is appropriate. For more indeterminate lesions, repeat evaluation for growth after 3–12 months is useful, with subsequent testing intervals based on the rate of growth. (1)

Upon completion of this educational activity, participants should be able to

Assess the probability of malignancy based on radiographic features.
Obtain pre-operative testing before resection of an incidentaloma.
Predict improvements in patients with subclinical Cushing’s syndrome after resection of an adenoma.
Target Audience

This continuing medical education activity should be of substantial interest to endocrinologists.

In adults, these masses represent many disorders (Table 1​1).). They may be hormonally active or nonfunctional and malignant or benign. Clinicians must determine the nature of the mass to decide what treatment, if any, is needed. 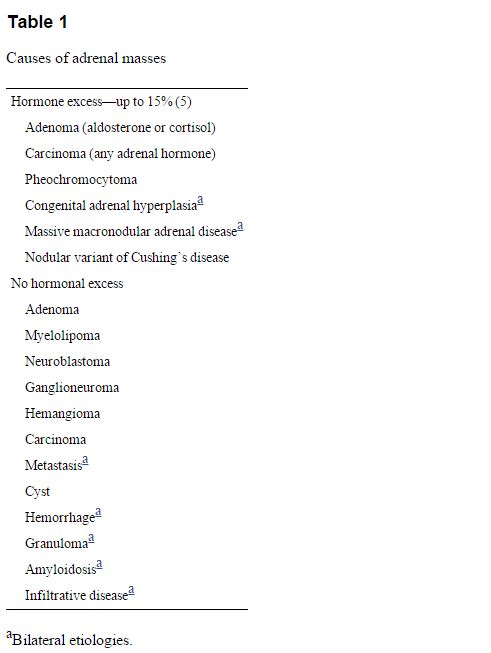 Diagnostic Strategies
Malignancy is an uncommon cause of incidentaloma in patients not known to have cancer. In two large studies, 4.7 and 5% of patients had primary adrenal carcinoma and 0.7 and 2.5% had nonadrenal metastasis (5,6). Malignancy is suggested (but not excluded) on CT by a large diameter (>6 cm), irregular border, inhomogeneity, a “washout” of contrast after 15 min of less than 40%, and calcifications (7,8). However, except for the washout characteristics, many malignant lesions look benign. A large diameter is not diagnostic; only about 25% of masses larger than 4 cm were adrenal cancer in one large study (5). Despite this, given the high mortality rate associated with adrenal carcinoma, most centers recommend excision of lesions sized 4 cm or more. However, if CT characteristics point to a myelolipoma or cyst, and the patient is asymptomatic, nonsurgical management is appropriate, regardless of mass size (9,10). Similarly, other clear-cut diagnoses do not dictate surgery (e.g. an acute hematoma, tuberculosis, myelolipoma, and possibly a nonfunctioning mass in an older individual).

Additional imaging techniques may suggest a diagnosis (11). If the initial CT studies are not diagnostic, measurement of HU and washout of contrast should be done. A low attenuation on CT before contrast administration reflects high lipid content and is found in myelolipomas (less than −30 HU) and lipid-rich adenomas (less than 10 HU) (11). In a study of 151 patients who had pathologically proven diagnoses, all nonadenomas had a precontrast HU of more than 10. However, lipid-poor adenomas can have higher attenuation, accounting for the poor sensitivity (about 58% for a 20-HU criterion) for their identification (12).

Other more expensive tests generally are not needed.

There is no consensus on the optimal diagnostic approach to the incidentally discovered adrenal mass. A report from an National Institutes of Health (NIH) “state of the science” conference and a review from an experienced clinician both recommend hormonal evaluation (except when the imaging findings are unequivocal, as in a myelolipoma) (17,18).

Cushing’s syndrome represents a spectrum of excess cortisol production in which signs and symptoms increase as hypercortisolism worsens. Patients with the full-blown syndrome often date its appearance to small changes that increased over time. By analogy, some adrenal masses probably secrete so little excess cortisol that minimal signs of Cushing’s syndrome are not recognized. This lack of recognition may reflect the common nature of the presenting features (usually weight gain, hypertension, and/or glucose intolerance in a middle-aged or older patient) and the absence of more “obvious” features. It may be more accurate to refer to this as mild or subtle rather than “subclinical” Cushing’s syndrome. The notion of mild hypersecretion with clinical consequences was substantiated by a study comparing women with “non-secretory” adrenal incidentaloma to healthy women and those with overt Cushing’s syndrome. The women with an incidentaloma were intermediate in terms of fat mass, prevalence of hypertension, lipid abnormalities, and response to an oral glucose tolerance test (19).

Because the diagnostic criteria for subtle Cushing’s syndrome vary between studies, its prevalence is not established (20). A meta-analysis of more than 2000 cases found subclinical Cushing’s syndrome in 5.3% (6), whereas a subsequent large study of 1004 patients found a 9.2% prevalence (5).

The Endocrine Society guidelines for the diagnosis of Cushing’s syndrome advocate screening these patients and suggest that the diagnosis is likely if two screening tests are abnormal, using urine free cortisol (UFC), late-night salivary cortisol, and/or dexamethasone suppression (1 mg overnight or 2 mg 2-day test) (21). By contrast, studies of adrenal incidentaloma often use measures of ACTH suppression, such as the basal morning value, the response to CRH, or the dehydroepiandrosterone sulfate (DHEAS) level (5,22,23,24,25). Furthermore, the criterion for an abnormal response to dexamethasone ranges from 2 to 5 μg/dl, not the 1.8 μg/dl cutoff point in the guidelines or the 5 μg/dl criterion recommended by the NIH state of the science report. Also, the number of abnormal results required for diagnosis is variable.

In most series, 4–7% of incidentalomas are pheochromocytomas (36,37,38), although one Korean study found a 20% prevalence (39). From another perspective, in one series of 201 patients with proven pheochromocytoma, only 10% of cases had the typical triad of symptoms (sweating, headaches, and palpitations), and 12.5% of incidentally found cases were normotensive (40).

Because patients may be asymptomatic and normotensive, each should be screened for pheochromocytoma (except for those with other obvious diagnoses). There is no consensus on the best screening test(s) and no prospective study comparing test regimens. Measurement of urine fractionated metanephrines and catecholamines is less sensitive than that of fractionated plasma free metanephrines, but the latter is less specific. An international symposium report suggests using either as a screening test, while recognizing the increased probability of true pathology with more abnormal results (41). Others suggest measurement of urine catecholamines in patients without strong radiographic evidence for pheochromocytoma and use of plasma free metanephrines in those with a greater pretest probability based on the imaging results (14). If possible, all patients with pheochromocytoma should undergo preoperative medical management to block any effects of catecholamines released during surgery (30).

Recent guidelines from The Endocrine Society advocate screening for hyperaldosteronism in patients with an adrenal incidentaloma and hypertension, citing a prevalence of 1.1 to 10% (42). The plasma aldosterone-to-renin ratio is recommended for case detection, using a sensitive renin assay and a diagnostic threshold of 20–40 (42). This should be obtained in the morning from a seated patient. Oral sodium loading, saline infusion, fludrocortisone suppression, or captopril challenge should be used to confirm or exclude the diagnosis. For patients with a mass of less than 2–3 cm who desire surgery, adrenal venous sampling is recommended to exclude adrenal hyperplasia, for which surgery is not recommended (42).

Long-Term Follow-Up
If patients do not undergo surgical resection, most authors recommend continued annual surveillance for hyperfunction, and one to three interval CT scans to evaluate increasing size, based on estimated risks (5,14,17,45). Cawood et al. (46) pose a contrarian view based on a meta-analysis of data from patients with probable adrenal adenoma followed for a median of 2.1 yr. They argue that the actual rates of conversion to hyperfunction are about 1% (95% confidence interval, −0.5 to 2.2), and increased size about 15% (95% confidence interval, 8.0–21.3%), and they show that malignancy or metastasis developed in only three of about 1400 patients. None of the patients developed hyperaldosteronism. Because of the cost of testing and potentially increased risk of cancer due to radiation exposure, they propose no additional follow-up for lesions less than 4 cm that appear to be benign and nonfunctioning, and they recommend a single additional CT scan for 4–6 cm lesions.

Two subsequent series (n = 200) with follow-up of 2 and 5 yr report an increase in size of 0.5 cm or more in 17.4 and 20% of patients, development of overt hyperfunction in 8 and 0%, but development of subclinical hypercortisolism in 6 and 24% (47,48). One patient developed adrenal carcinoma. Another retrospective study (49) suggests that malignancy can be detected by an absolute increase in size of 0.8 cm, 0.64 cm growth per year, or a 25% increase in size per year. These cutoff points tended to have a better specificity (75–85%) than sensitivity (50–50%) in patients with a second imaging at 3–12 months after initial evaluation. However, the study included patients with known malignancy. There were three patients with initially unrecognized adrenal cancer whose masses had a HU more than 10 and grew 1.0, 3.0, and 3.3 cm over 2, 12, and 15 months, respectively (49).

All that follows is from reference (3), Incidentally Discovered Adrenal Mass – ACR Appropriateness Criteria 2012:

Unenhanced CT is a relatively inexpensive yet highly specific test for differentiating adenomas and some benign
nonadenomas from malignant lesions. Korobkin et al [32,33] have shown that delayed enhanced CT and use of
washout percentages are better able to distinguish adenomas from metastases than unenhanced CT alone. Both
lipid-rich and lipid-poor adenomas tend to wash out faster after administration of intravenous contrast [34,35].
This may result from the increased “leakiness” of malignant vessels compared with benign lesions. Korobkin et al
[32,33] showed that following a delay of 15 minutes after the administration of intravenous contrast, the
sensitivity and specificity of CT could be greatly improved (sensitivity >95%, specificity >97%). Szolar et al [36]
had similar results using 30-minute delay times (sensitivity 97%, specificity 100%). The accuracy of washout
values was validated by Caoili et al in a study of 166 adrenal masses, accurate characterization being achieved in
96% of masses [37]. Thus, this technique is the main tool that is used at many institutions for distinguishing
between adenomas and nonadenomas and is superior to nonenhanced CT [38,39].