The following are excerpts from resource (1):

In coronary spasm, sudden excessive coronary vasoconstriction
produces a transient reduction of blood flow, resulting
in myocardial ischemia (supply ischemia/primary angina).
Although coronary spasm occurs mainly in large coronary
arteries running on the surface of the heart, it is also known to
occur in the coronary microvasculature of the myocardium.
Coronary spasm is not always preceded by elevations of blood
pressure and heart rate, which increase myocardial oxygen
consumption. In this regard, coronary spasm is a pathological
condition that is clearly distinguishable from demand
ischemia/secondary angina represented by effort angina.
Coronary spasm develops in sclerotic lesions of varying
severity. Even when no stenotic lesions are visible on coronary
angiography, intravascular ultrasound (IVUS) reveals
clear arteriosclerotic lesions in locations consistent with
regions of coronary spasm.5 Reduction of blood flow due to
coronary spasm activates platelets and the coagulation
system,6 causing vascular smooth muscle cell proliferation.7
It has in fact been revealed by evaluation using quantitative
coronary angiography that the locations of coronary spasm
induced in provocation tests were particularly susceptible to
progression of arteriosclerosis.8,9

It was reported as early as the 1970s that coronary spasm can
trigger not only angina but also myocardial infarction. There
have been patients with acute myocardial infarction in whom
emergent coronary angiography revealed extremely mild
organic stenosis, as well as patients with complete coronary
occlusion which exhibited recanalization after administration
of nitrates alone. Recently, unstable angina, acute
myocardial infarction, and sudden ischemic cardiac death
have been referred to collectively as acute coronary
syndrome. This is because these diseases share the pathological
finding of rapid progression of coronary lesions, ie,
disruption of coronary atheroma (plaque) and the resulting
thrombus formation.10 Coronary plaques are observed in the
form of local thickening of the intima, and are structurally
characterized by the accumulation of foamy macrophages
forming a lipid core covered by a fibrous cap of connective
tissue and smooth muscle cells. It has been hypothesized
that if a tear occurs in this cap, the highly thrombogenic
plaque content becomes exposed to the blood flow and
rapidly forms thrombi that obstruct the vascular lumen.
Plaques more likely to be ruptured are termed vulnerable
plaques; they are often characterized by high lipid content
and a thinned fibrous cap, and tend to be large.
It has been suggested that coronary spasm is a cause of
rupture of vulnerable plaques. Investigations of coronary
lesions in autopsies have demonstrated that spasm causes
endothelial cell derangement and fibrous cap rupture, resulting
in the protrusion of the plaque content exposed to the
vascular lumen, where thrombi are produced.11 In addition,
coronary spasm is accompanied by hypercoagulation,12
decreased fibrinolytic activity,13 and activation of platelets
and adhesion molecules,14 resulting in a thrombophilic state
in acute coronary syndrome. Although plaque stabilization
(prevention of rupture) and antithrombotic therapy are
important in the prevention and treatment of acute coronary
syndrome, prevention of coronary spasm is also important,
particularly in Japanese, in whom the prevalence of coronary
spasm is higher than in western countries.

At present, vasospastic angina is diagnosed in Japan using
criteria independently adopted by individual institutions. In
this background, the present guidelines are established to
unify the diagnostic criteria with reference to previous
reports and other findings. Yasue et al. state that vasospastic
angina can be diagnosed even without performing coronary
angiography, provided that anginal attacks disappear quickly
upon administration of nitroglycerin, and that any one of the
five conditions shown below is met:

(1) attacks appear at rest, particularly between night and early morning;

(2)marked diurnal variation is observed in exercise tolerance (in particular, reduction of exercise capacity in the early morning);

(3) attacks are accompanied by ST elevation on
the ECG;

(4) attacks are induced by hyperventilation (hyperpnea);

(5) attacks are suppressed by calcium channel blockers but not by β-blockers.15 In the present guidelines, reference
items based on that opinion are included in the
diagnostic criteria established for three grades: “Definite,”
“Suspected,” or “Unlikely”. The diagnostic criteria for vasospastic angina are provided below. A diagnostic flow chart is shown in Figure 1. 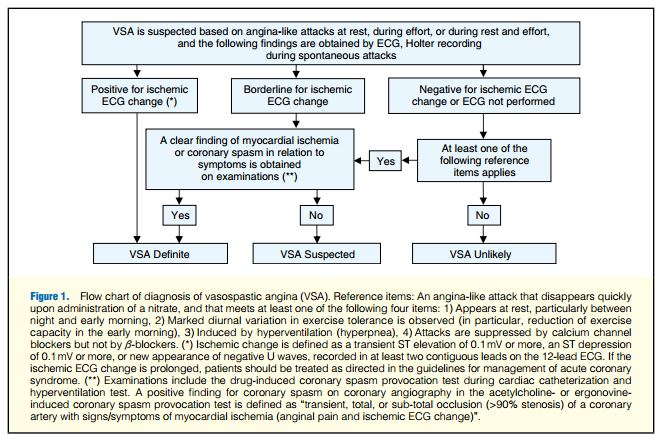 Reference Items
An angina-like attack that disappears quickly upon administration of a nitrate, and that meets at least one of the following four items:
1) Appears at rest, particularly between night and early
morning.
2) Marked diurnal variation in exercise tolerance is observed
(in particular, reduction of exercise capacity in the early
morning).
3) Induced by hyperventilation (hyperpnea).
4) Attacks are suppressed by calcium channel blockers but
not by β-blockers.

(1) Subjective Symptoms                                                                      (1) Characterized by vague pain that cannot be indicated by
a single finger, with a sensation of compression, a pressing
sensation, and a sensation of tightness in the precordium,
especially in the center of the substernal region.
Occasionally, symptoms develop in the upper abdomen.
(2) Appears at rest, with pain persisting for several to about
15 minutes. The pain often radiates to the neck, jaws,
left shoulder, and elsewhere, occasionally accompanied
by symptoms such as numbness and weakness of the left
shoulder and upper arm.
(3) Anginal attacks due to coronary spasm often persist
longer than effort anginal attacks due to organic stenotic
lesions, and are sometimes accompanied by cold sweats
and disturbance of consciousness including syncope.
(4) Can be induced by hyperpnea and drinking of alcohol.
(5) Fast-acting nitrates are remarkably effective against
attacks of coronary spasm.
(6) Calcium channel blockers suppress attacks of coronary
spasm.
(7) Attacks are often accompanied by arrhythmias; if they
are complicated by complete atrioventricular block,
ventricular tachycardia, or ventricular fibrillation, disturbance of consciousness or syncope is observed.
(8) Attacks of coronary spasm typically occur at rest
between night and early morning. They are usually not
induced by daytime exercise. Diurnal variation with a
peak between night and early morning is observed; 67%
of attacks are asymptomatic episodes of myocardial
ischemia without subjective symptoms (Figure 4).69
Usually, attacks of vasospastic angina can be induced by
even slight effort in the early morning, but are not
induced by even strenuous effort in the afternoon or later
in the day. Hence, diurnal variation is also observed in
exercise tolerance in patients with vasospastic angina.
(9) Attacks of coronary spasm may occur frequently, ie,
several times every day, or may not occur for several
months to several years.
(2) Physical Findings
In auscultation during attacks, gallop rhythms and systolic
murmurs are sometimes heard. These are caused by
decreased wall motion, mitral regurgitation, and other
changes resulting from ischemia. If symptoms disappear
upon administration of a fast-acting nitrate or similar agent,
these findings may also disappear. Hypotension may occur
during attacks. In addition, since the arrhythmias developing
in association with attacks include complete atrioventricular
block, ventricular tachycardia, and ventricular fibrillation,
they must be monitored for carefully.