Every doctor learned about Rheumatic Fever in medical school and memorized the Jones criteria for it’s diagnosis. The big change is that the new revised Jones criteria recommend using echo doppler as one of the major criteria for the diagnosis of of subclinical carditis – meaning mitral insufficency or aortic insufficiency diagnosed by echo doppler even if auscultation is normal. Reference (2)

The following is from Reference (1) below:

Clinical manifestations and time course of acute rheumatic fever are shown in the image below. 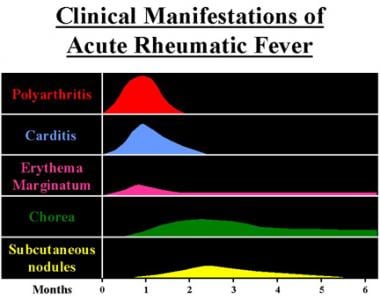 Acute RHD often produces a pancarditis, characterized by endocarditis, myocarditis, and pericarditis. Endocarditis is manifested as mitral and aortic valve insufficiency. Severe scarring of the valves develops during a period of months to years after an episode of acute rheumatic fever, and recurrent episodes may cause progressive damage to the valves. The mitral valve is affected most commonly and severely (65-70% of patients); the aortic valve is affected second most commonly (25%).
Rheumatic fever is now uncommon among children in the United States. The incidence of rheumatic fever and RHD was thought to be decreased in the United States and other industrialized countries during the past 80 years. The prevalence of RHD in the United States was less than 0.05 per 1000 population, . . .
In contrast to trends in the United States, rheumatic fever and RHD have not decreased in developing countries. Retrospective studies in developing countries demonstrate the highest figures for cardiac involvement and the highest recurrence rates of rheumatic fever.[7] Worldwide, there are over 15 million cases of RHD, with 282,000 new cases and 33,000 deaths from this disease each year.[8]
The modified Jones criteria for initial acute rheumatic fever

Revised in 1992 and again in 2016, the modified Jones criteria provide guidelines for making the diagnosis of rheumatic fever.[9, 10] The Jones criteria differentiate between low risk populations (incidence of acute rheumatic fever in ≤2 per 100,000 school-aged children or all-age rheumatic heart disease prevalence of ≤1 per 1000 population per year), vs. moderate and high risk populations (where the groups may experience an incidence of 153 to 380 cases per 100,000 patients per year in the 5-14 year old age group).[11] .  The new criteria also include a role for echocardiography in addition to a clinical assessment of the heart for a diagnosis of carditis.  The new guidelines are in closer alignment with other international guidelines such as those from the World Health Organization.

Having evidence of previous group A streptococci pharyngitis is also necessary.  An exception to the requirement for evidence of previous group A streptococci pharyngitis can be made in patients with chorea and clinical or subclinical (echo diagnosis) evidence of carditis. When minor manifestations alone are present, the exclusion of other more likely causes of the clinical presentation is recommended before a diagnosis of an acute rheumatic fever recurrence is made.

The tricuspid valve is deformed in only 10% of patients, almost always in association with mitral and aortic lesions, and the pulmonary valve is rarely affected. Severe valve insufficiency during the acute phase may result in congestive heart failure (CHF) and even death (1% of patients). Whether myocardial dysfunction during acute rheumatic fever is primarily related to myocarditis or is secondary to CHF from severe valve insufficiency is not known. When pericarditis is present, it rarely affects cardiac function or results in constrictive pericarditis.
Chronic manifestations occur in adults with previous RHD from residual and progressive valve deformity. RHD is responsible for 99% of mitral valve stenosis in adults, and it may be associated with atrial fibrillation from chronic mitral valve disease and atrial enlargement

(2) Revision of the Jones Criteria for the Diagnosis of Acute Rheumatic Fever in the Era of Doppler Echocardiography: A Scientific Statement From the American Heart Association [PubMed Abstract] [Full Text HTML] [Download Full Text PDF]. Circulation. 2015 May 19;131(20):1806-18.

This entry was posted in Internal Medicine, Pediatrics. Bookmark the permalink.