The following is from Reference (6):

In Japan, where Kawasaki disease has the highest incidence, an estimated 5000-6000 cases occur annually. Individuals of Asian descent are 20 times more likely to develop Kawasaki disease than whites.[1] The exact etiology is unknown; however, recent evidence suggests a combination of genetic factors and a possible infectious source.[2]

The following is from Reference (2):

Kawasaki disease was first described in 1967 by Dr Tomisaku Kawasaki, who reported 50 cases of a distinctive illness in children seen at the Tokyo Red Cross Medical Center in Japan.[1]

Kawasaki disease (KD) is an acute febrile vasculitic syndrome of early childhood that, although it has a good prognosis with treatment, can lead to death from coronary artery aneurysm (CAA) in a very small percentage of patients.

The acronym FEBRILE is used to remember the criteria as follows:

If a patient presents with 4 or more of the principal criteria, AHA guidelines suggest that Kawasaki disease can be diagnosed on day 4 of the fever.

Echocardiography is the study of choice to evaluate for coronary artery aneurysms. Serial echocardiograms should be obtained as follows:

No specific laboratory test is used to diagnose Kawasaki disease.

The principal goal of treatment is to prevent coronary artery disease and to relieve symptoms. Full doses of intravenous immunoglobulin (IVIG) are the mainstay of treatment.[5, 8, 9] Aspirin (high-dose for a variable period, followed by low-dose) has traditionally been standard, as well.

Echocardiographic studies have shown that 20-25% of untreated children with Kawasaki disease develop cardiovascular sequelae ranging from asymptomatic coronary artery ectasis or aneurysm formation to giant CAAs with thrombosis, MI, and sudden death. The mortality rate is 0.1-2%. Early administration of intravenous immunoglobulin (IVIG) reduces the risk of developing cardiac involvement to 5%. Although inflammatory infiltrates have been shown in the pancreas, kidney, and biliary tract, no significant sequelae persist in those tissues.

In so-called incomplete cases, febrile patients appear to have Kawasaki disease but do not meet diagnostic criteria and have no other identified cause of their illness. Laboratory testing supports the diagnosis in these cases (see Workup).

Although most patients recover with little to no physical activity limitations, a delay in diagnosis results in a greater likelihood of coronary lesions and complications thereof; therefore, a provider must be aware of the classic and atypical presentation of this disease to ensure an optimal patient outcome. Therapy should be started within 10 days, and ideally within 7 days, of fever onset.[14]

Coronary artery aneurysms manifest in 25% of untreated KD can remain clinically silent for years and subsequently thrombose causing myocardial infarction. KD currently is the most common etiology of acquired heart disease occurring in children the United States, in Asia, and Western Europe. Cardiologists must be aware that coronary artery aneurysms that occur in young adults can be the result of missed KD in childhood.[15]

IVIG and aspirin have constituted the mainstays of therapy for Kawasaki disease. However, the usefulness of aspirin has been called into question. Other agents, such as corticosteroids and infliximab, have been used in patients with disease refractory to IVIG.[16] (See Treatment.)

The following is from Reference (1):

The following time course chart is from Reference (3): 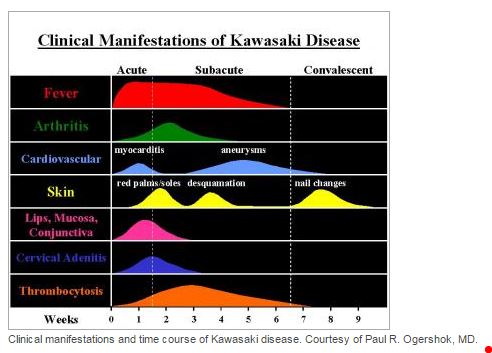 This entry was posted in Pediatric Emergency Medicine, Pediatrics. Bookmark the permalink.