What follows are excerpts from the European College of Cardiology Resource (1) :

Myocarditis is a challenging diagnosis due to the heterogeneity of clinical presentations.1–3 The actual incidence of myocarditis is also difficult to determine as endomyocardial biopsy (EMB), the diagnostic gold standard,1–3 is used infrequently.2,3 Studies addressing the issue of sudden cardiac death in young people report a highly variable autopsy prevalence of myocarditis, ranging from 2 to 42% of cases.4,5 Similarly, biopsy-proven myocarditis is reported in 9–16% of adult patients with unexplained non-ischaemic dilated cardiomyopathy (DCM)6,7 and in 46% of children with an identified cause of DCM.8 In patients presenting with mild symptoms and minimal ventricular dysfunction, myocarditis often resolves spontaneously without specific treatment.9 However, in up to 30% of cases, biopsy-proven myocarditis can progress to DCM and is associated with a poor prognosis.1–3,7–9 Prognosis in myocarditis patients also varies according to the underlying aetiology.9 The treatment of many forms of myocarditis is symptomatic,10 but immunohistochemical1–3,9,10,11–15 and molecular biological analysis of EMB16 as well as autoantibody serum testing is important to identify those patients in whom specific therapy is appropriate.9,17 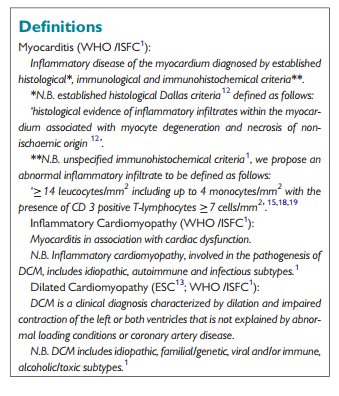 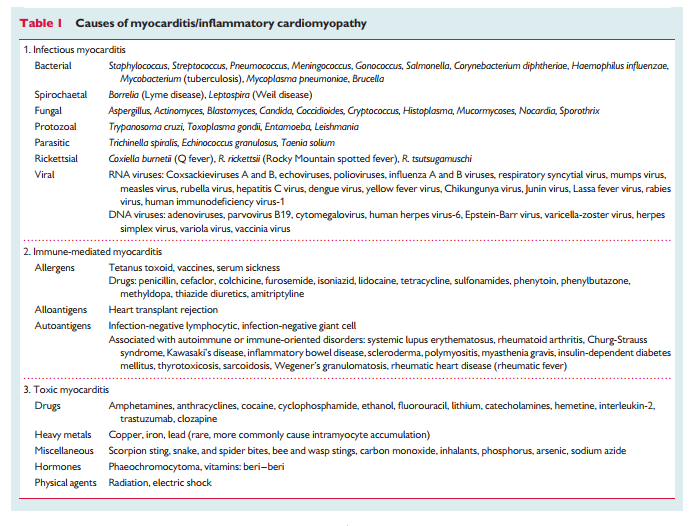 Although the aetiology of myocarditis often remains undetermined, a large variety of infectious agents, systemic diseases, drugs, and toxins can cause the disease (Table 1).1–3,11,16,21–24 Some causes of myocarditis are now largely historical or occur in very specific scenarios such as sepsis or in immunocompromised patients. Molecular techniques, mainly (reverse transcriptase)(RT)-PCR amplification,9,18,19,22,24–34 suggest that viral infections are the most important cause of myocarditis in North America and Europe with genomes of enterovirus, adenovirus, influenza viruses, human herpes virus-6 (HHV-6), Epstein-Barr-virus, cytomegalovirus, hepatitis C virus, and parvovirus B19 reported in the myocardium of patients with myocarditis and DCM. Lymphocytic and giant cell myocarditis are presumed idiopathic or autoimmune if no viruses are identified in EMB and other known causes are excluded (Figure 1).17 Similarly, the diagnosis of idiopathic granulomatous myocarditis (cardiac sarcoidosis) requires negative stains for microorganisms.2 Autoimmune myocarditis may occur with exclusive cardiac involvement or in the context of autoimmune disorders with extra-cardiac manifestations,9,11,17 most frequently in sarcoidosis (Figure 1), hypereosinophilic syndrome, scleroderma, and systemic lupus erythematosus.

In human myocarditis, there is evidence for viral and autoimmune mechanisms, acting in individuals with or without a genetic predisposition (familial or sporadic cases, respectively).14,15,18,35 – 103 Murine studies of viral myocarditis 23,104 – 107 are based mostly on Coxsackievirus B3-infected animals, which exhibit strain-specific susceptibility. Enteroviruses that preferentially enter cardiomyocytes via specific receptors cause severe cytopathic effects due to virus replication in the first 2 weeks post-infection. As a consequence, a humoral and cellular immune response, mainly consisting of macrophages and CD4+ and CD8+ T- lymphocytes, is initiated in resistant animals (C57BL/6 mice, Sv129 mice) and leads to the elimination of the infectious agent within 2 weeks following infection. In susceptible mouse strains (e.g. A/J, ABY/SnJ, ASW/SnJ, ACA/SnJ, SWR/J, Balb/c), viral RNA and inflammation persist in the heart for several weeks.104 – 105 There is evidence that in these susceptible mice strains, the ongoing infection and inflammation trigger autoimmune reactions in the heart, most likely as a result of myocyte necrosis and subsequent release of self-antigens previously hidden to the immune system (Figure 2).108 The same genetically predisposed strains of animals develop autoimmune lymphocytic or giant cell myocarditis and later DCM after immunization with cardiac autoantigens (e.g. cardiac myosin) or spontaneously. In common with other autoimmune diseases such as Type 1 diabetes, major histocompatibility complex (MHC) and non-MHC genes appear to be responsible for the predisposition to murine myocarditis.17,108 – 115 It is likely that genetic predisposition is also important for the development of viral116 and/or autoimmune myocarditis and its progression to DCM in humans.35–36,117 Progression from myocarditis to DCM seems to occur predominantly in patients with histologically confirmed persistant (chronic) inflammation18 that cannot eliminate the infective microbialagents32orhavedevelopedpathogeniccardiacautoantibodies directed against myocardial structural, sarcoplasmic, or sarcolemmal proteins. The frequency, cardiac, and disease specificity for such antibodies in myocarditis/DCM are summarized in Table 2. 9,36,37,118,119 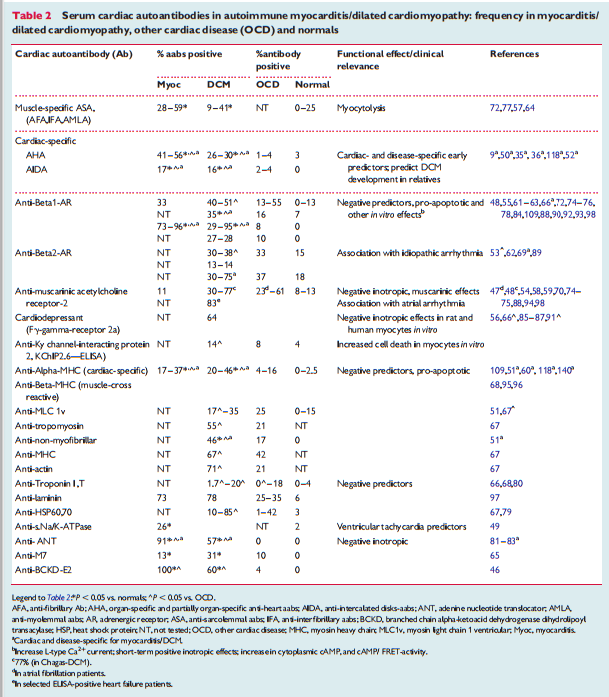 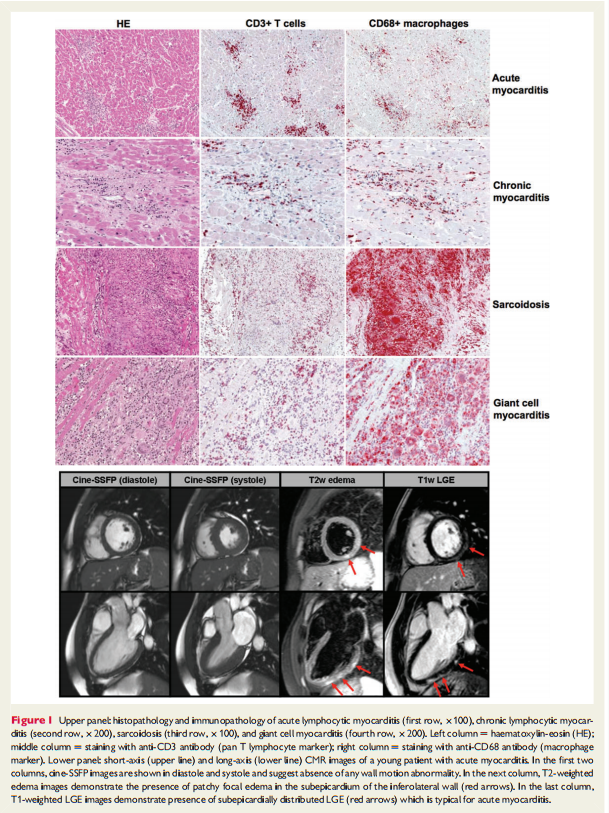 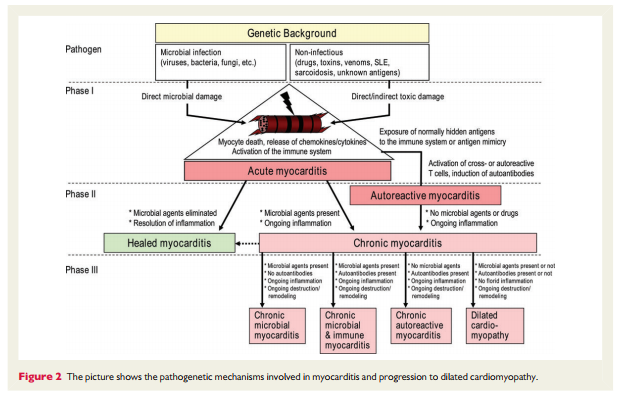