Google+ Evaluation Of Lymphadenopathy - Link To And Excerpts From #202 Live! Lumphadenopathy From The CurbsidersL - Tom Wade MD

In this post I link to and excerpt from: 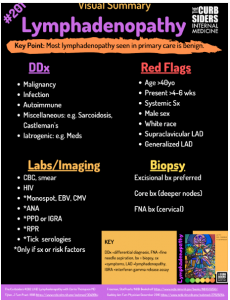 Most lymphadenopathy (LAD) seen in primary care is not caused by malignancy, which makes up about 4% in those over 40 and 0.4% of those under 40 years old [Fitjen, 1988*]. NOTE*: This was a small retrospective study from the Netherlands. We wouldn’t put too much stock in percentages, but the general consensus is that the rate of malignant LAD in primary care is low.

Taking a history for lymphadenopathy

Use the ALL AGES Mnemonic

The following additional tests can be considered if clinical suspicion is high (list based on both Gaddey, 2016 algorithm and our conversation with Dr. Thompson):

Dr. Thompson notes that a CT scan is usually the first choice for adults because it delineates the extent of LAD including deeper lymph node involvement. Ultrasound can be helpful to avoid radiation in pediatric patients or to help plan for a needle biopsy in adults.

Fine needle aspiration (FNA) acquires a small piece of tissue to examine the cell type present i.e. malignant vs benign. Dr. Thompson might choose an FNA if a patient has cervical or supraclavicular adenopathy and lung cancer or head & neck cancer is suspected because an excisional biopsy in these cases might make future neck dissection more difficult (expert opinion).

A core needle biopsy is larger and gives some idea of the histopathology i.e. “what the cells look like in place next to each other”. This is most useful for non-palpable lymph nodes (expert opinion).

Excisional biopsy gives the lymph node’s entire architecture and is particularly important in diagnosing lymphoma. For example, in Hodgkin’s lymphoma the pathognomonic Reed Sternberg cells are the minority of cells and, thus might be missed by an FNA or core needle biopsy  (expert opinion).

Which lymph node should you biopsy?

Generally, Dr. Thompson recommends a biopsy of the largest palpable lymph node (LN). If equal size LNs in the inguinal and axillary region, then go with the axillary LN since they’re less likely reactive. If no palpable LN and significant internal LAD (e.g. mesenteric or mediastinal) then a core needle biopsy of these sites is appropriate (expert opinion).

When should a patient with LAD be referred to Heme Onc?

Usually the referral is made after a biopsy has been obtained, but one might consider referral for fever of unknown origin or to help interpret the initial biopsy results.

This entry was posted in Curbsiders, Hematology, Oncology. Bookmark the permalink.