In this post I link to and excerpt from Resource Document on QTc Prolongation and Psychotropic Medications
Approved by the Joint Reference Committee, June 2018

All that follows is excerpted from the above.

Psychiatrists frequently prescribe psychotropic drugs that may prolong cardiac repolarization, thereby increasing the risk for torsades de pointes (TdP). The heart-rate corrected QT interval (QTc) on the electrocardiogram (ECG) is the most widely used and accepted marker of TdP risk by drug safety boards. Over the past decade, there has been increased attention by the medical community about the role of QTc interval monitoring in the prescription of psychotropic medications.

Though TdP is thought to be a fairly rare event, active surveillance systems suggest the incidence of TdP may be 10 to 100-fold higher than estimated by spontaneous report (1).

The APA Council on Psychosomatic Medicine, in collaboration with the ACC, convened this workgroup of experts in the field to summarize the current literature and to create a set of clinical considerations for the practicing clinician. This resource document is not intended to be a practice guideline, rather an
educational tool for clinicians to use when prescribing psychotropic medications.

TdP usually occurs in unsustained bursts that terminate
spontaneously. These bursts can recur and may progress to a fatal ventricular arrhythmia. When not quickly fatal, it is clinically characterized by palpitation, dizziness, and syncope. Chest pain, shortness of breath, and sweating may be present as non-specific symptoms. 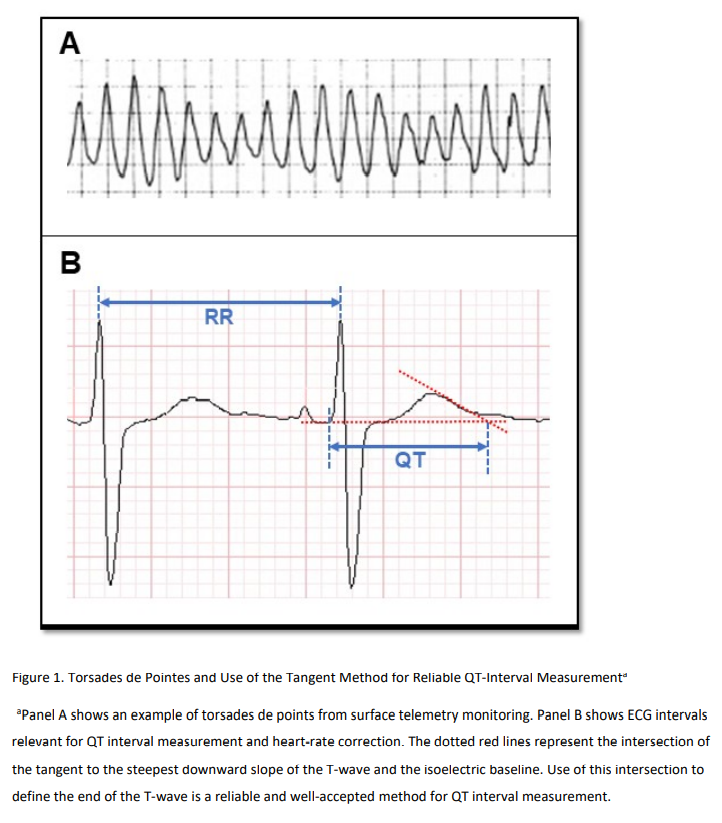 The burst-pattern of drug-induced TdP makes it very difficult to capture on a standard 10 second ECG. Pre-mortem diagnosis by ECG requires prolonged monitoring and sometimes a bit of luck. Sudden cardiac death attributable to drug-induced TdP is likewise difficult to adjudicate without concomitant ECG evidence of the arrhythmia. Therefore, surrogate markers and risk models have been used to inform prescribers of drugs that might produce TdP in an individual patient. Since TdP is characterized by a prolonged QTc interval by definition, QTc interval prolongation has been the major surrogate marker for   the clinical arrhythmia.

In a major Rotterdam prospective population-based cohort study, prolonged QTc interval (as defined in Table 1) was associated with a three-fold (8-fold for those ≥68 years age) increased risk of sudden cardiac death over a 6.7-year follow-up period (4).

Ventricular tissue is vulnerable to polymorphic ventricular tachycardia (e.g., TdP) during the latter part of the repolarization phase and the risk increases if ventricular repolarization is prolonged. The majority of drugs associated with QTc interval prolongation and TdP are linked to pharmacological blockade of hERG (human-Ether-a-go-Related Gene) potassium channels (Figure 2.D), which produce a repolarizing current termed the delayed rectifier current (IKr) (8). The role of magnesium (Mg 2+), known to be a first line intervention for acute TdP, is unclear mechanistically, but may serve to stabilize the cardiac myocyte membrane potential via
interaction with calcium and potassium channels (Figure 2.C)

The duration of QT interval varies depending upon the heart rate, and the QT interval needs to be “corrected” (QTc) for heart rate to make it more consistent and clinically meaningful. A number of different formulae, each with its own set of limitations, exist to correct the QT interval for heart rate. It is important to recognize there is a lack of consensus as to which technique is optimal, and none are perfect. When doing serial comparisons of QTc interval, the same correction technique should be used throughout.

Bazett’s formula* was a standard for pharmaceutical research  but the International Council for Harmonization of
Technical Requirements for Pharmaceuticals for Human Use (ICH) recently identified it as “an inferior method” and recommended using Fridericia’s formula* (or another suitable method) instead (www.ich.org).

*Corrected QT Interval from MDCalc. The user can choose between the following formulas: Bazett, Fridericia, Framingham, and Hodge.

[For details on the QTc interval, please see the sections: Technical Aspects of Recording and Measuring QT interval on the ECG  and How to measure the QT interval on pp 8 + 9 of the document.]