Links To And Excerpts From ‘Angina with “normal” coronary arteries: a changing philosophy’

The above article has been cited by 85 articles in PubMed Central.

What follows are excerpts from the above article:

Patients with chest pain and normal or nonobstructive coronary angiograms are predominantly women, and many have a prognosis that is not as benign as commonly thought. Assessment of endothelial function may help identify patients at risk for future cardiac events. Therapy should be directed at symptom relief with tricyclic agents and beta-blockers, and aggressive antiatherosclerotic therapy with statins, angiotensin-converting enzyme inhibitors, or both should be applied when risk factors are present or prognostic risk is high. Large-scale randomized trials need to be conducted to determine optimal ways of preventing clinical events. 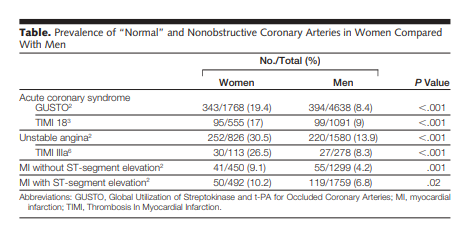 The prognosis of “normal” coronary arteries in the setting of signs and symptoms of myocardial ischemia is not as benign as reported by preliminary cohort studies,10-12 and as commonly assumed by physicians. Short-term prognosis of patients with unstable angina and nonobstructive coronary artery disease includes a 2% risk of death or myocardial infarction at 30 days of follow-up.6 .  .  .   In addition, compared with the baseline
population, these patients are at increased risk for traditionally defined major cardiovascular events including premature death, myocardial infarction and stroke.15

Causes of Angina With Normal Angiograms

The pathophysiology of women with angina and “normal” angiograms is not homogeneous: some patients have chest pain of noncardiac origin, others have chest pain of cardiac but nonischemic origin, and others have chest pain due to myocardial ischemia related to atherosclerotic coronary vascular abnormalities, presumably related to diffuse
disease without focal obstructions. All groups may have disability due to chest pain, but prognosis and optimal therapeutic management may be different.Not only is angina with “normal” or nonobstructive coronary angiography
a heterogeneous disorder, differences between different reported studies are likely also related to differences in constitution of study populations. Characterization of such patients depends
on the extent to which they are investigated, usually with special testing not routinely used.

Myocardial infarction, cardiac arrest, and sudden death can occur, although infrequently, with variant angina in the absence of obstructive coronary stenosis.16,17A number of studies have reported a low incidence of coronary artery vasospasm in predominantly white populations presenting with signs and symptoms of ischemia. Overall, only 2% to 3% of patients with chest pain undergoing coronary angiography appear to have
variant angina.18 Among 217 patients hospitalized at the Montreal Heart Institute between 1976 and 1986 with this
diagnosis, 86 (40%) were found to have normal or near-normal angiograms.19 Thus, while coronary artery spasm can account for the signs and symptoms of ischemia, it does not appear to play a major role in patients with angina in the absence of obstructive coronary disease.

Recent data suggest that the ST segment changes and abnormalities in myocardial reversible perfusion defects frequently observed in patients with anginalike chest pain and “normal” coronary arteries may be true myocardial ischemia likely related to atherosclerotic disease, and not false positive test results. This view is supported by the documentation of abnormal coronary blood flow responses to vasoactive stimuli,20 production of sensitive markers of ischemia, including increased transmyocardial lipoperoxide activity,21 and abnormalities in myocardial phosphorus metabolism consistent with stress-induced myocardial ischemia.22 These data shed light on prior studies that failed to show
myocardial lactate production, albeit an insensitive marker of myocardial ischemia, or impaired left ventricular dysfunction23,24 during angina and ST segment depression, which generated doubts on the ischemic origin of pain
in a part of these patients.25

Women with angina and normal angiograms may present with
symptoms of both stable and unstable angina. The majority of patients seem to be between these 2 extremes, with a variable prevalence of the 2 types of symptoms.

Several clues in a patient’s history may suggest the presence of angina despite “normal” angiograms; these include an extremely variable threshold of physical activity that provokes angina31; radiation of the discomfort to the submammary areas32; and features associated with pain, such as mental arousal, or palpitation.34 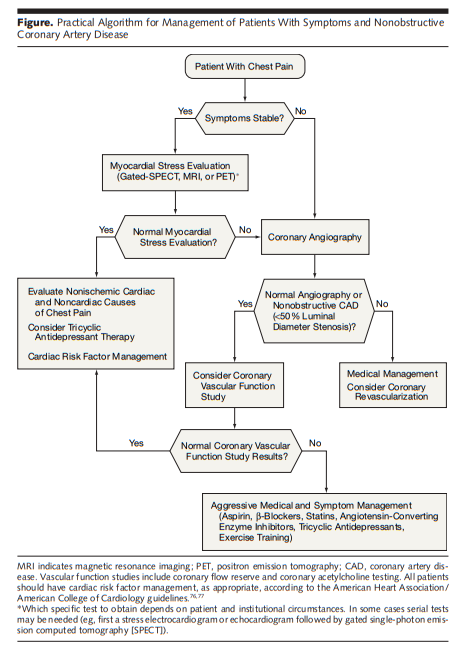 Opherk et al40 first reported the finding of reduced coronary flow reserve in patients with angina and “normal” angiograms using the argon washout method.  .  .  .  More recent studies addressed this issue calculating myocardial perfusion by magnetic resonance imaging.36,37 Approximately 25% of the population of patients with angina and “normal” or near normal angiograms had an abnormally reduced flow reserve using this technique37; however, this may underestimate the prevalence due to issues of providing an adequate stress in the magnetic resonance imaging magnet.  .  .  .  The prevalence of vascular dysfunction by coronary flow assessment,39 singlephoton emission computed tomography,37 or positron emission tomography 3 8 consistently demonstrate abnormalities in 50% to 60% of women with “normal” or near-normal angiograms, suggesting that vascular dysfunction is common in this population.

There are a number of likely causes for impairment of coronary flow reserve in patients with nonobstructive coronary angiograms. Coronary flow is regulated by several endothelium dependent and independent factors influencing macrovascular and microvascular tone.

Abnormalities in coronary microvascular responses to adenosine do not appear to be predictive of adverse outcomes in patients with chest pain and normal angiograms and in those with coronary artery disease.15,49-51 Conversely, when impaired coronary flow reserve is accompanied by coronary endothelial dysfunction, as assessed by acetylcholine testing, it predicts an unfavorable outcome.15,32,49-51

Outcomes, therefore, can be quite different in an
apparently homogeneous population of women found to have chest pain related to abnormalities in impaired coronary flow reserve as assessed by magnetic resonance imaging or
single-photon emission computed tomography.13,32

There does not appear to be a correlation between plaque burden and endothelial and nonendothelial coronary blood flow response.51,60

Endothelial dysfunction, impaired coronary flow reserve, and atherosclerosis, although causally related in many patients, are distinct problems and may exist separately. Many patients have
mild atherosclerosis but normal endothelial function.15,51 Others may show underlying atherosclerotic plaques and
normal coronary flow reserve.60 Thus, endothelial dysfunction may not simply be a marker of atherosclerosis.  .  .  .  Mild and moderate plaques are the most common cause of acute
coronary syndrome, which may provide a link between seemingly “normal” coronary arteries and increased risk of future cardiac events.63

Observational evidence does not
support the widespread use of calcium antagonists in patients with “normal” angiograms because they seem to do little to prevent chest pain during daily life in these patients.34,64-66 Other work has documented that calcium antagonists fail to ameliorate the diminished coronary blood flow reserve of
these patients.67 Nitrates are referred to be of help anecdotally in some patients but not in others. No cohort studies have reported the effects of nitrates during daily life, and the placebo
effect of nitrates cannot be ruled out.

β-Blockers have been shown to be highly effective for reduction of chest pain episodes during daily life.34,65 There are several potential mechanisms by which β-blockers may act in reducing
chest pain recurrences. They may counteract the proischemic effects of increased adrenergic tone or may simply reduce myocardial oxygen demand. β-Blockers are endothelium-dependent vasodilators as well.68 The proven benefit of exercise training in this population suggests that mechanism of adrenergic modulation plays a role.69

Perfusion testing with magnetic resonance imaging or gated single-photon emission computed tomography can be
a first step toward identifying patients with chest pain and “normal” or nonobstructive coronary angiograms who are at risk of subsequent cardiac events. Additional invasive testing aimed at determining coronary endothelial dysfunction may be helpful to assess the etiological mechanisms of impaired
coronary flow reserve and further risk stratification of future adverse cardiac events [See Flow Chart (Figure) above].

Lifestyle changes and risk factor management should be considered essential components of any therapeutic approach for patients with traditional cardiac risk factors, evidence of atherosclerosis, or both.76,77 .   .   .   For patients with cardiac chest pain and evidence of ischemia by perfusion testing, β-adrenergic blockers may reduce myocardial oxygen consumption and symptoms. Exercise training has
also been demonstrated to be beneficial.69 Aggressive therapy with statins and angiotensin-converting enzyme inhibitors should be used for patients who qualify for this treatment by the presence of cardiac risk factors and have evidence of atherosclerosis or evidence of endothelial dysfunction. Persistence or deterioration of symptoms despite aggressive medical therapy in women with endothelial dysfunction may be indicative of coronary disease progression and repeat coronary angiography can be appropriate.