In this post, I link to and excerpt from The Journal Of Ultrasound article, Comparison of four handheld point-of-care ultrasound devices by expert users [PubMedA Abstract] [Full-Text HTML] [Full-Text PDF], 2022 Jul 7;14(1):27.

Introduction
Point-of-care ultrasound (POCUS), or use of bedside ultrasound by a clinician to answer a specifc diagnostic question or guide performance of an invasive procedure, is becoming more common across healthcare specialties. Historically, POCUS has been performed using portable cart-based ultrasound machines that ofer a wide range of modalities and consistently generate high-quality images, but access to portable ultrasound machines has been a top barrier to POCUS use [1–6]. In recent years,
ultraportable handheld ultrasound devices have emerged improving access to POCUS technology at a fraction of the cost, especially in resource-limited settings [7]

We compared four commonly available handheld ultrasound devices in the United States for ease of use, image quality, and overall satisfaction with a multidisciplinary group of POCUS experts as operators. Our secondary objective was to identify the characteristics that POCUS experts consider to be most important when comparing diferent handheld ultrasound devices for use in clinical practice.

Each standardized patient was assigned to one of three
POCUS views: Focused Assessment with Sonography
in Trauma (FAST) right upper quadrant view, transverse view of the neck with the internal jugular vein and
carotid artery, or parasternal long-axis view of the heart.

For the parasternal long-axis view, experts were instructed to use the low-frequency probe with a cardiac preset and focus on the mitral valve, aortic valve, and endocardial lining. Color fow Doppler was then applied over the mitral and aortic valves.

Data collection
Data were collected on ease of use, image quality, and
overall satisfaction (Additional fle 1).

For ease of use, experts rated the physical characteristics, software navigation, maneuverability of the probe and tablet for imaging, and overall satisfaction.

The overall ranking assessed satisfaction and recommendation for purchase. 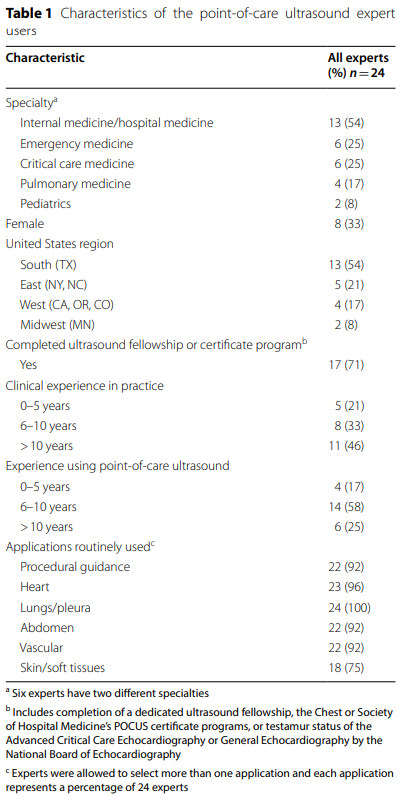 Ratings of the handheld ultrasound devices’ ease of
use and image quality are displayed in Table 2.

The mean ratings for ease of use and image quality are
displayed in Fig. 1.

Examples of the parasternal long-axis view captured in early systole using the four handheld ultrasound devices are shown in Fig. 2. 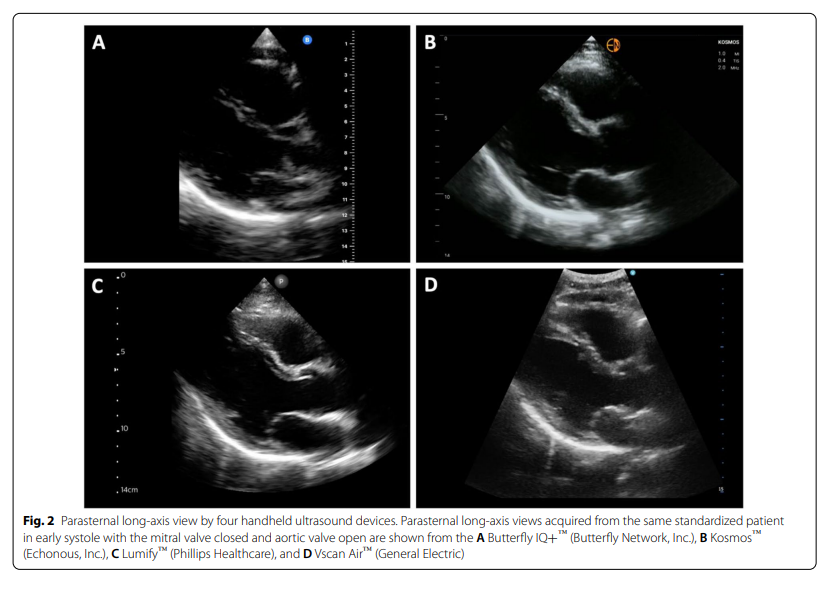 First, there is not yet a perfect handheld device. Experts perceived all four devices as having notable advantages
and disadvantages. Experts valued high image quality, the convenience of having only one probe, intuitive user interfaces, and advanced features, like Doppler ultrasound and artifcial intelligence (AI). Ultimately, no single device was perceived as having all desired qualities or features.

One expert stated, “The poor image quality is a deal breaker,” and another said, “Image quality is poor and would result in me getting a larger machine to confdently make a clinical decision which is double the work in my mind.”

Some experts also noted poor image quality may negatively afect the ability for inexperienced POCUS users to attain competency. Oneexpert remarked, “This (device) is being marketed to physicians with minimal training, and if you take a minimally trained physician and give them a device that is very poor quality, then you have a recipe for disaster”.

Ultimately, no single handheld ultrasound device was rated highest in all categories. A lack of consensus of a single handheld ultrasound device being superior to others was similar to the fndings by Toscano et al. in which investigators sought one suitable handheld device to perform gynecologic ultrasound exams in a resource-poorsetting and ultimately selected the Lumify™ based on itsease of use, battery-life, portability, cost, and ease withdepth and gain adjustments [12]. Even though POCUSexperts rated Lumify™ highest for “overall satisfaction” in our study, more experts selected Vscan Air™ as the device
they would buy “today as a personal device to carry in my
coat pocket”.

After image quality, the most important characteristics of handheld devices were ease of use, portability, total costs, and availability of diferent probe types. Perhaps once image quality is adequate for clinical decision-making, these secondary characteristics, such as ease of use and software options, become more of a deciding factor in selecting a handheld ultrasound device.