Google+ Links To And Excerpts From "Diagnosis and management of primary autoimmune neutropenia in children: insights for clinicians" - Tom Wade MD

Links To And Excerpts From “Diagnosis and management of primary autoimmune neutropenia in children: insights for clinicians”

In this post I link to and excerpt from Diagnosis and management of primary autoimmune neutropenia in children: insights for clinicians [PubMed Abstract] [Full Text HTML] [Full Text PDF]. Ther Adv Hematol. 2015 Feb;6(1):15-24.

Autoimmune neutropenia of infancy (AIN), also called primary autoimmune neutropenia, is a disease in which antibodies recognize membrane antigens of neutrophils, mostly located on immunoglobulin G (IgG) Fc receptor type 3b (FcγIIIb receptor), causing their peripheral destruction. It is the most frequent type of neutropenia in children under 3–4 years of age and in most cases shows a benign, self-limited course. The diagnosis is based on evidence of indirect antineutrophil antibodies, whose detection frequently remains difficult. In this review we have analyzed the literature regarding AIN and present our personal experience in diagnosis and management.

Autoimmune neutropenia of infancy/childhood is a relatively frequent cause of neutropenia in children: the median age at diagnosis is 7–9 months [Lalezari et al. 1986; Bux et al. 1998; Wang et al. 2009]. The historical incidence is reported to be 1 out of 100,000 children under 10 years of age [Lyall et al. 1992] but, due to the benign course of the disease, there is clear evidence of underreporting, highlighted by frequent fortuitous findings (8–27% of all cases) [Bux et al. 1998; Audrain et al. 2011]. In our experience, diagnosis as consequence of a blood count planned for other reasons (i.e. surgery or pallor) is at least 30% of the total, and it is our opinion that the unexpected finding of a neutropenic child below 3–4 years of age most likely unveils a diagnosis of autoimmune neutropenia of infancy.

Most patients recover by 4–5 years of age and in about 90% resolution occurs before 2 years of duration [Bux et al. 1998]. Serious infections occur only in about 12–20% of affected children [Bux et al. 1998; Fioredda et al. 2013]. A mild associated leukopenia is possible and about a quarter of children present monocytosis [Bux et al. 1992b, 1998]. Based on the above considerations, autoimmune neutropenia of infancy looks very different from autoimmune neutropenia of older children and adulthood, since the latter is characterized by a more severe clinical course, by a higher frequency in females and by a far lower tendency to spontaneous recovery; it is also frequently associated with other autoimmune disorders [Bussel and Abboud, 1987; Capsoni et al. 2005].

In keeping with this the diagnostic guidelines published by the Marrow Failure Study Group of the Associazione Italiana Onco-Ematologia Pediatrica (AIEOP) [Fioredda et al. 2011] rely on indirect antineutrophil antibody detection by flow cytometry immunofluorescence for the diagnosis of AIN. Obviously the sensitivity of indirect testing further increases on repeated determinations, and so in case the first test is negative but there is still a clinical picture consistent with AIN, the Italian guidelines recommend repeating the test up to four or more times over a time-span of 4–6 months or longer. If all four tests are negative and no maturational arrest can be found in bone marrow, the final diagnosis of ‘idiopathic neutropenia’ will be established. Due to the limited sensitivity of the indirect test, particularly if nongenotyped donors are used, it is common not to achieve a firm diagnosis of autoimmune neutropenia and many of these children are called ‘chronic/idiopathic benign neutropenia of infancy’ (or similar), but in the vast majority they are infancy autoimmune neutropenias. In these cases a definitive diagnosis will be reached only ‘ex post’, that is, after the highly frequent spontaneous recovery and after having excluded a postinfection neutropenia.

A frequent doubt is whether to perform a bone marrow evaluation. In most cases bone marrow is not informative [Bux et al. 1998], even though normal/hyper cellular marrow generally with a late maturational arrest may support the diagnosis. The presence of autoantibodies against myeloid precursors is the theoretical basis on which it is possible to explain the occasional appearance of myeloid hypoplasia [Currie et al. 1987; Hartman et al. 1994]. In our opinion it is possible to postpone the procedure until after at least the result of the first autoantibody assay if the child’s age is typical, if there is no other associated cytopenia, if there are no severe infections in the medical record, and if there are no clinical or laboratory criteria for suspicion of leukemia.

Please see the text for an excellent discussion of the differential diagnosis. 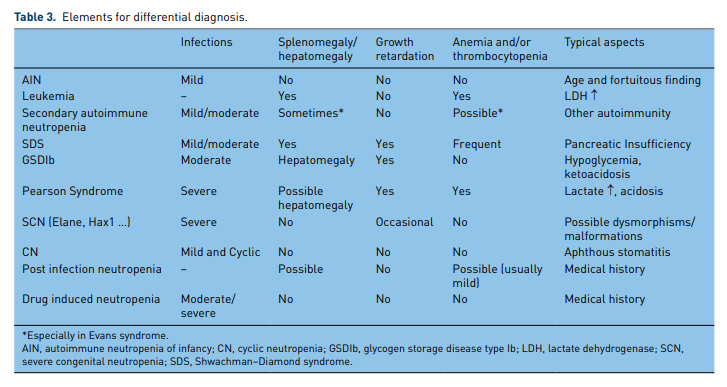