In this post, I link to and excerpt from Clinical Practice Guideline for Screening and Management of High Blood Pressure in Children and Adolescents  [PubMed Abstract] [Full-Text HTML] [Full-Text PDF]. Pediatrics. 2017 Sep;140(3):e20171904.

All that follows is from the above resource 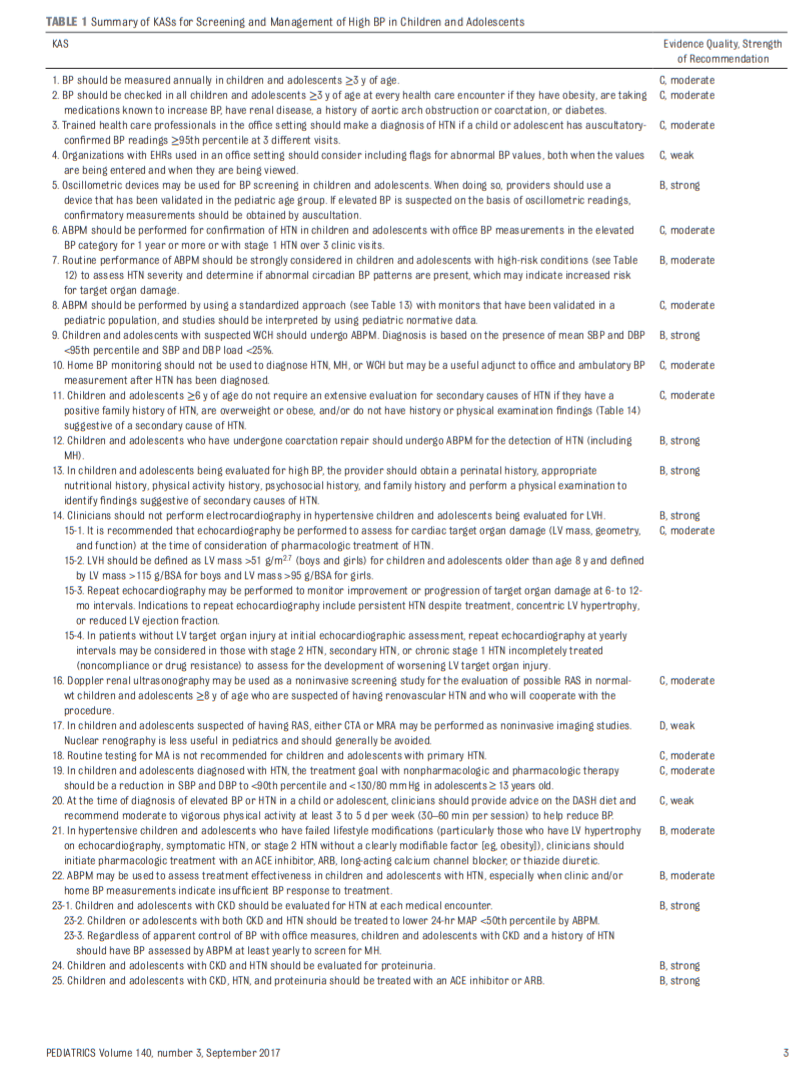 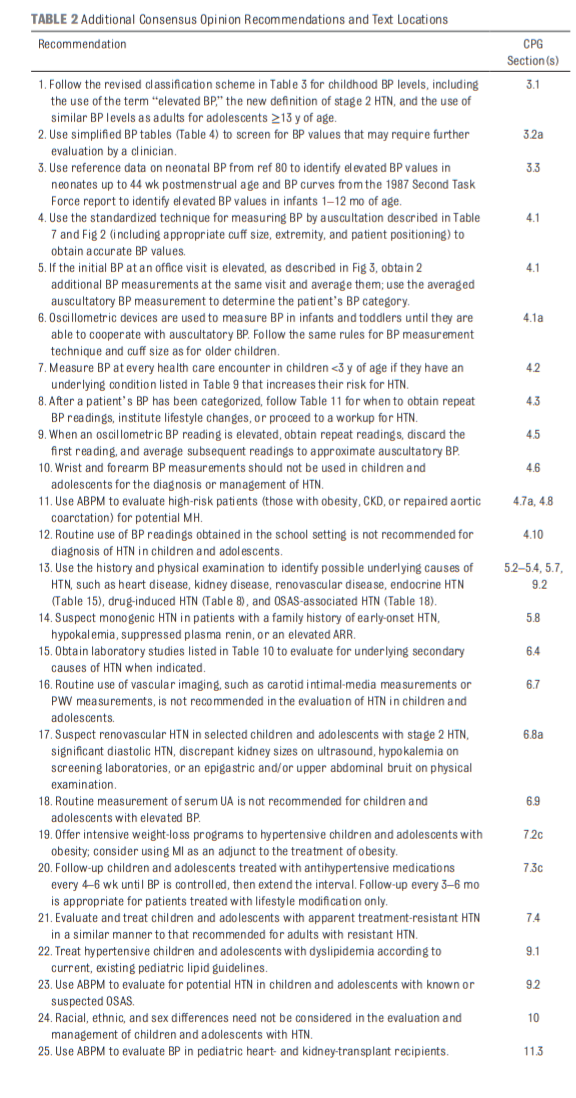 New normative BP tables based on normal-weight children are included with these guidelines (see Tables 4 and 5‍).  See pages 8 – 14 of the PDF 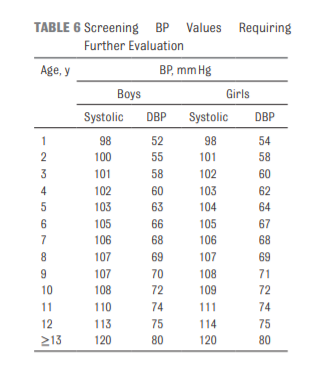 4.1a Measurement of BP in the Neonate

Multiple methods are available for the measurement of BP in
hospitalized neonates, including direct intra-arterial measurements using indwelling catheters as well
as indirect measurements using the oscillometric technique. In the office, however, the oscillometric technique typically is used at least until the infant is able to cooperate with manual BP determination (which also depends on the ability
of the individual measuring the BP to obtain auscultatory BP in infants and toddlers). Normative values for neonatal and infant BP have generally been determined in the right upper
arm with the infant supine, and a similar approach should be followed in the outpatient setting.

As with older children, proper cuff size is important in obtaining
accurate BP readings in neonates. The cuff bladder length should encircle 80% to 100% of the arm
circumference; a cuff bladder with a width-to-arm circumference ratio of 0.45 to 0.55 is recommended.‍ 79,97,98

Offices that will be obtaining BP measurements in neonates need to have a variety of cuff sizes available. In addition, the oscillometric device used should be validated in neonates
and programmed to have an initial inflation value appropriate for infants (generally ≤120 mmHg). Auscultation becomes technically feasible once the infant’s upper arm
is large enough for the smallest cuff available for auscultatory devices. Measurements are best taken when the infant is in a calm state; multiple readings may be needed if the first reading is elevated, similar to the technique recommended for older children.‍ 99,100

BP should be measured annually in children and adolescents ≥3
years of age (grade C, moderate recommendation).

BP should be checked in all children and adolescents ≥3 years of age at every health care encounter if they have obesity, are taking medications known to increase BP, have renal
disease, a history of aortic arch obstruction or coarctation, or
diabetes (see Table 9) (grade C, moderate recommendation). 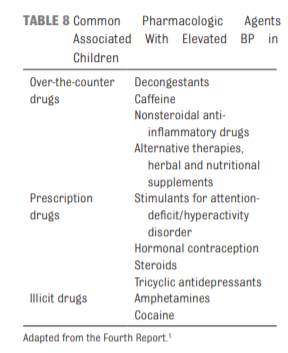 Researchers in several studies have evaluated the accuracy of
oscillometric devices‍127,129–134 and compared auscultatory and oscillometric readings’ ability to predict target organ damage.‍135 These studies demonstrated that oscillometric devices systematically overestimate SBP and DBP
compared with values obtained by auscultation.‍
129,133 BP status potentially can be misclassified
because of the different values obtained by these 2 methods, which may be magnified in the office setting.‍86,88,129 Target organ damage (such as increased LV mass and elevated PWV) was best predicted by BPs obtained by auscultation.‍135

A major issue with oscillometric devices is that there appears to
be great within-visit variation with inaccurately high readings
obtained on initial measurement.‍136 An elevated initial oscillometric reading should be ignored and repeat measures averaged to approximate values obtained by auscultation. 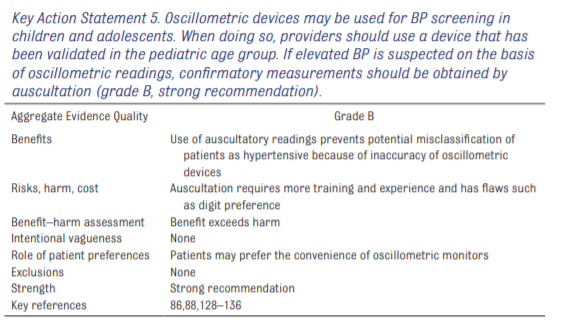 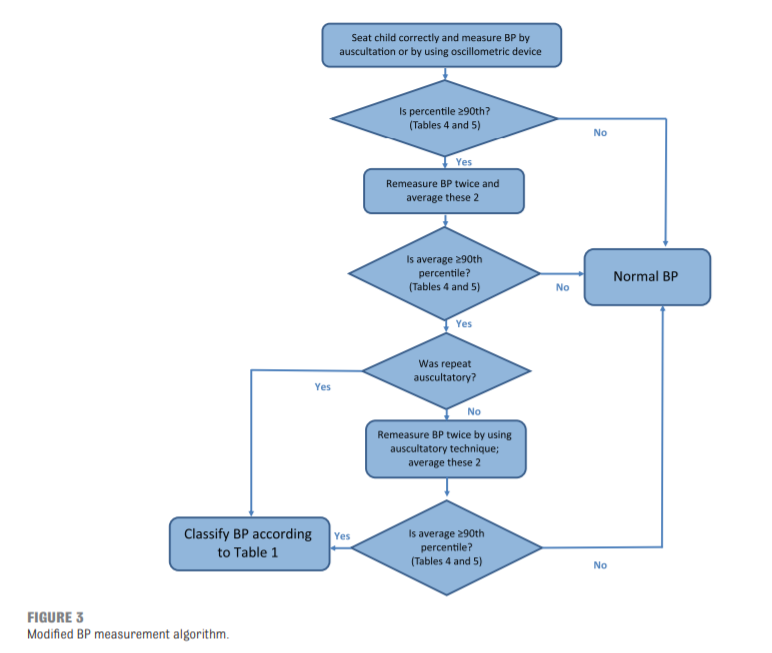 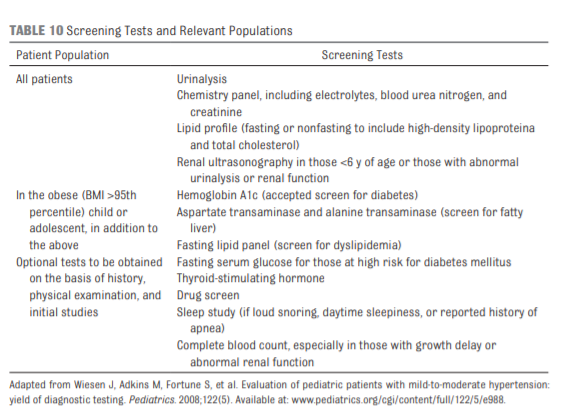 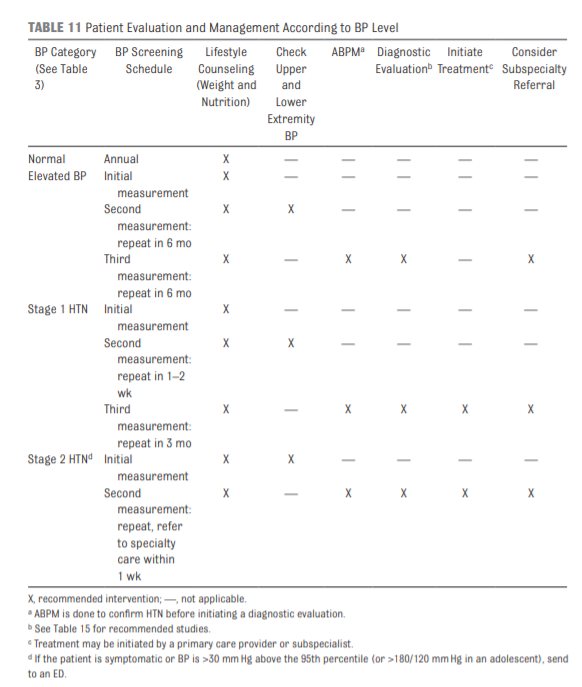 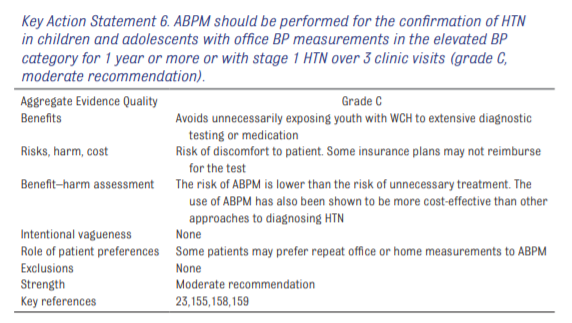 The routine performance of ABPM should be strongly considered in children and adolescents with high-risk conditions (see Table 12) to assess HTN severity and determine if abnormal circadian BP patterns are present, which may indicate increased risk for target organ damage (grade B, moderate recommendation).

ABPM should be performed by using a standardized approach (see Table 13) with monitors that have been validated in a pediatric population, and studies should be interpreted by
using pediatric normative data (grade C, moderate recommendation).

MH occurs when patients have normal office BP but elevated BP on ABPM, and it has been found in 5.8% of unselected children studied by ABPM.‍199 There is growing evidence that compared with those with normal 24-hour BP, these patients
have significant risk for end organ hypertensive damage.‍
200,203 Patients who are at risk of MH include
patients with obesity and secondary forms of HTN, such as CKD or repaired aortic coarctation. MH is particularly prevalent in patients with CKD‍48 and is associated with target organ damage.203 Children with CKD should be periodically evaluated using ABPM for MH as part of routine CKD management.‍201,204–206

Children and adolescents with WCH should have screening BP measured at regular well-child care visits with consideration of a repeat ABPM in 1 to 2 years.

Children and adolescents with suspected WCH should undergo
ABPM. Diagnosis is based on the presence of mean SBP and DBP
<95th percentile and SBP and DBP load <25% (grade B, strong
recommendation).

4.8 Measurement in Children With Obesity

Accurate BP measurement can be challenging in individuals with obesity. 23,211,212 Elevated BMI in children and adolescents is associated with an increase in the midarm circumference,96 requiring the use of a larger cuff to obtain
accurate BP measurements.83 During NHANES 2007–2010, among children 9 to 11 years of age with obesity, one-third of boys and one-quarter of girls required an adult BP cuff, and
a fraction required a large adult cuff or an adult thigh cuff for an accurate measurement of BP.‍213

ABPM is a valuable tool in the diagnosis of HTN
in children with obesity because of the discrepancies between casual and ambulatory BP‍23,33 and the higher prevalence of MH.‍26,29,155,216,217

General characteristics of children with primary HTN include older age (≥6 years),239,240 positive family history (in a parent and/or grandparent) of HTN,236,237,240 and overweight and/or obesity.‍ 16,236,237,239 Severity of BP elevation has not
differed significantly between children with primary and secondary HTN in some studies,235,237 but DBP elevation appears to be more predictive of secondary HTN,239,240
whereas systolic HTN appears to be more predictive of primary
HTN.‍236,239

This entry was posted in Pediatric Guidelines, Pediatric Hypertension. Bookmark the permalink.