Here are the links to the Pediatric Hemophilia Podcast and Script from Peds Cases.*

*Here is the complete list of the Table Of Contents of the PedsCases website. On this page the site has organized all of the contents into two groups: Clinical Presentation and Specialty Area.

And here are some excerpts from the Script:

1. Hemophilia is an x-linked recessive bleeding disorder which is generally inherited, and is
caused by a deficiency of plasma coagulation factor VIII in hemophilia A or factor IX in hemophilia B. Therefore, it primarily only occurs in males. If a female carrier gives the
gene to a male, he will have hemophilia, and if she gives it to a female, she will be a carrier.
2. Hemophilia most commonly presents with a family history. For this reason, testing at
birth is generally recommended. This is done with blood testing for clotting factor amounts and bleeding time, with coagulation studies.
3. Treatment essentially breaks down into two categories: prophylactic or treatment of bleeds. As treatment is generally very effective in controlling and preventing symptoms, most patients presenting with symptoms are typically not being treated, and/or are presenting for the first time.
4. With life threatening bleeds, it is crucial to give a first dose of factor immediately, and then investigate further afterward. Investigations should not impede this step, in
management.
5. Having a multidisciplinary bleeding disorder care team including a hematologist, is important. They work with and involve the parents and the affected child, to empower them to live a full and healthy life. Home IV therapy programs exist and are valuable resources. The goal is to make self-treatment a viable option that most can do safely and comfortably, which has been shown to be cost saving to the healthcare system.

Hemophilia is an x-linked or “sex linked” recessive inherited bleeding disorder, caused by absence, deficiency, or dysfunction of plasma coagulation factor VIII (in hemophilia A), or factor
IX (in hemophilia B). Thus, hemophilia primarily only occurs in males, while other clotting disorders can occur equally in males and females. Affecting approximately 1/5,000 people, it is
estimated to affect over 400,000 people worldwide. Unfortunately, only 25% of those affected receive adequate treatment and care for their condition.

On average, carriers of the hemophilia gene will have about 50% of the normal clotting factor, but some carriers have far lower levels. Therefore, depending on the genetic predisposition to factor levels, a carrier may in fact have symptoms of hemophilia.

Rarely, hemophilia can be acquired, typically later in life, often involving middle aged or elderly people, or young women who have recently given birth or are in later stages of pregnancy. This condition often resolves with treatment.*

Hemophilia can [also] occur when there is no family history. This is called ‘sporadic hemophilia’, and about 30% of those with hemophilia acquire it through a sporadic mutation.* However, as inherited forms of hemophilia A and B are most common, those will be the primary focus of this podcast.

(1) Acquired Hemophilia from the National Organization For Rare Disorders accessed 8-15-2019.

Here are excerpts from the above article:

Background: Hemophilias are groups of blood clotting disorder caused by deficiency of blood clotting factors which is X-linked recessively inherited and explain why mostly man is the affected victim. But on an extremely rare condition a women can have hemophilia due to several reasons and sporadic hemophilia is used to describe when hemophilia appeared without ascent and decent history of hemophilia. A 38 years old women with a peripheral spontaneous bleeding for two days although an open flap and a cauterization to stop the bleeding has been applied. She was the third child of 7 children in the family, 3 of them were man with normal life and 4 women also have no history of bleeding. Her parent and grand-parent were all dead because of aging problems. She also has 2 sons
with ages of 10 and 13 years, respectively, live normally. Results: factor VIII activity 192 seconds (control: 80 seconds), factor IX activity 2 seconds (control: 111 seconds), hence patient was considered suffered from sporadic haemophilia-B due to low level of factor IX 1.8% and bleeding episodes mimicking clinical presentation of classical hemophilia patients while no known history of having hemophiliac family. The different diagnose were Von Willebrand Diisease (VWD), symptomatic carriers, acquired hemophilia. After several admissions and repeatedly bleeding episodes patient died because of intra cerebral bleeding. 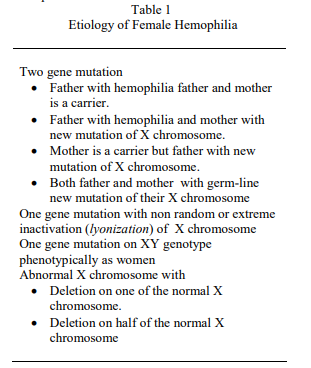 Women 38 year old suspected of having sporadic hemophilia based on repeatedly bleeding episodes due to low level of factor IX activity (1.8%) supported by no history of hemophila
running in the family neither ascendant nor descendent. Definite diagnosis through DNA mutation analysis and other genetics testing was not carried out. The assumptions of the etiology of
female hemophilic were (i) new mutation of germ cell on both parent, (ii) new mutation of germ cell on one of parent (ovum or sperm) with non random or extreme inactivation (lyonization) of normal X chromosome, (iii) mutation of female hemophilic
zygote (at the early stage of embryogenesis) with non random or extreme inactivation of normal X chromosome, (iv) mosaic deletion of X chromosome, caryotype 46XX, 45XO and most of
tissue that produce IX factor (45XO). VWD and acquired hemophilia have also been considered but less likely to be the case. Despite abnormal coagulation tests, no other significant laboratorium and physical findings were found. Counseling, education, supportive therapy for acute bleeding management and fresh frozen plasma has been given to this patient and she finally passed away one year later because of cerebral bleeding.

(3) Hemophilia Home Page From The Centers For Disease Control And Prevention accessed 8-15-2019.