Pediatric diabetic ketoacidosis can be hard to diagnose. Here’s help from EMC.

It turns out that kids who present to the ED [office, or urgent care] in DKA without a known history of diabetes, can sometimes be tricky to diagnose, as they often present with vague symptoms.

Remember that glucose should be considered the sixth vital sign and any “sick” appearing child should have a point of care glucose done!

The above and what follows are excerpts [meaning listen to the podcast and review the complete show notes] from the podcast  Episode 63 – Pediatric DKA from Emergency Medicine Cases (EMC) April 2015:

Why can Pediatric DKA be easy to miss?

In a child without a known history of diabetes, making the diagnosis of DKA can be difficult, especially in the mild cases where symptoms can be quite vague. If we don’t have a high level of suspicion we can easily miss cases of early DKA. Thus, the diagnosis should be considered or ruled out if any of the following are present:

Remember that glucose should be considered the sixth vital sign and any “sick” appearing child should have a point of care glucose done!

Once DKA is suspected, elements on history should focus on screening for symptoms of diabetes (polyuria, polydipsia, enuresis ,weight loss) as well as symptoms of DKA (nausea, vomiting, abdominal pain, decreased alertness). However, be sure to take the assessment one step further and consider any precipitating causes (viral or bacterial illness, social factors etc). 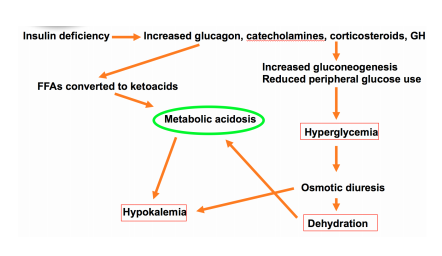 Diagnosis and Classification of Pediatric DKA

The diagnostic criteria for DKA are:

The diagnosis can be made from either a VBG or ABG. Since a VBG is readily available, fairly accurate in the setting of DKA and not as painful to attain, our experts recommend VBGs over ABGs in this setting.

The severity of DKA ranges from mild to severe and will influence the treatment and disposition of the patient. The classification is made based on two laboratory values: pH and HCO3.

Note that serum ketones are not required for the diagnosis of DKA and are not routinely ordered by our experts.

[The show notes of this podcast have an excellent detailed discussion of the management which I have not included — See the post. All pediatric DKAs should optimally be managed under the care of a pediatric diabetes specialist if available.]

There are a number of important differences between the management of DKA in pediatrics compared to adult patients. While adults require large volumes of intravenous fluids, large volumes of fluid are harmful in pediatric DKA. The administration of IV fluids should be done very judiciously in the pediatric population. The second important difference is the administration of insulin. While insulin is bloused in the adult patient, insulin boluses are contraindicated in the pediatric patient with DKA. Monitoring and correction of potassium is heavily stressed in the adult patient with DKA. In children however, IV fluids are started prior to insulin administration, and a potassium level will always be available prior to initiating insulin. With respect to the acidosis, bicarbonate is indicated in adult patients who are profoundly acidotic. In contrast, sodium bicarbonate is not indicated in children outside of an arrest situation. 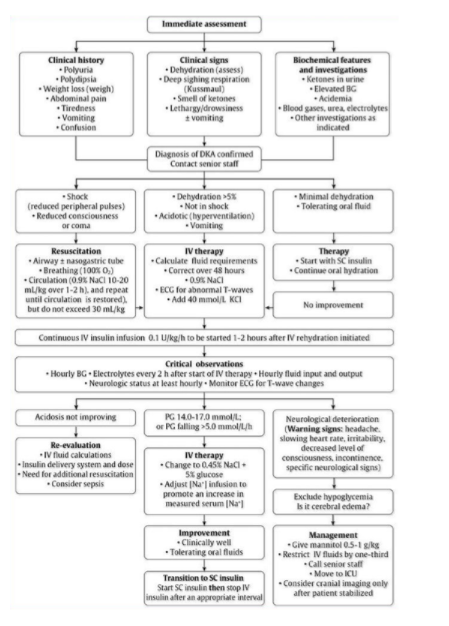