[Update 7-18-2018: For a complete review of the danger of Vilazodone (an SSRI) to pediatric patients please see  Tox and Hound – Don’t Pick the Scab – Vilazodone an SSRI with partial agony properties. July 9, 2018 from Tox & Hound by Dr. Dan Rosniak. I have posted excerpts just for my study notes at Vilazodone – Be Afraid (Be Very Afraid) – A Warning From Tox And The Hound Posted on July 18, 2018.]

Think of the serotonin sydrome when the patient has:

I wanted to review Serotonin Syndrome and, for me, there is no better way than to see what the emergency medicine bloggers and podcasters say. I found the article below by going to foambase.org table of contents and clicking on the toxicology section. Foambase is an incredible resource for all primary care physicians. I also reviewed the two other Serotonin Syndrome resources that are in Additional Resources below. Both of these were also found on Foambase Serotonin Syndrome page.

Please review the notes that follow Resource (1) in Additional Resources for a discussion of which opioids are safe to use in person already on serotonergic drugs.

The following is from the EMBlog Mayo Clinic – Primum non nocere: How understanding Serotonin Syndrome will help you stay true to the Hippocratic Oath December 2nd, 2014:

Recognition, the core theme of this review, is a fundamental skill crucial for Emergency providers when challenged with serotonin syndrome.

Symptoms manifest predictably, with increasing intrasynaptic serotonin concentration i.e. the more serotonin stimulating the post synaptic receptors, the greater the symptoms. Occasionally, monotherapy may precipitate symptoms, but most severe reactions are attributed to polypharmacy. Serotonin is dose dependent and typically occurs within 24 hours of ingestion, often with initiation of a new serotonergic medication co prescribed with a second agent. This may be seen in a patient with depression on an SSRI with acute or chronic pain who then have narcotics added to their regimen. Approximately 60 percent of patients with the serotonin syndrome present within six hours after initial use of medication, an overdose, or a change in dosing (ask about recent medication changes).

Serotonin is an essential neurotransmitter found in the central nervous system at the brainstem raphe nuclei as well as in the periphery within intestinal enterochromaffin cells and platelets. Centrally, it regulates wakefulness, affective behavior, core temperature, vomiting, eating behavior, and sexual behavior. In the periphery, it modulates gastrointestinal motility and vasomotor function. 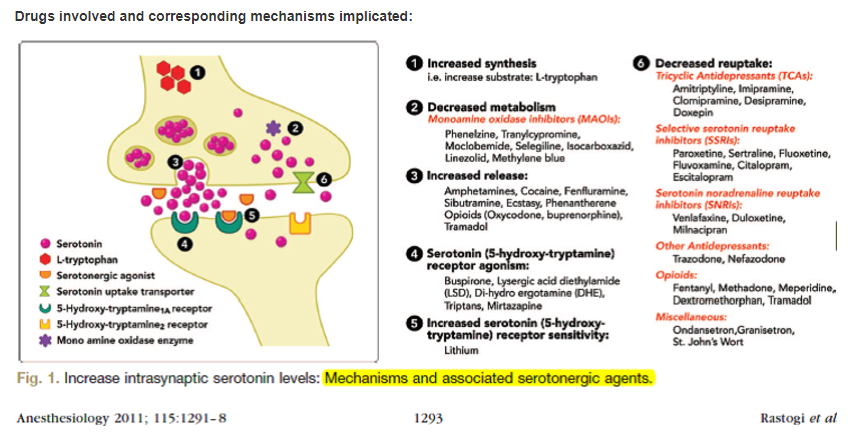 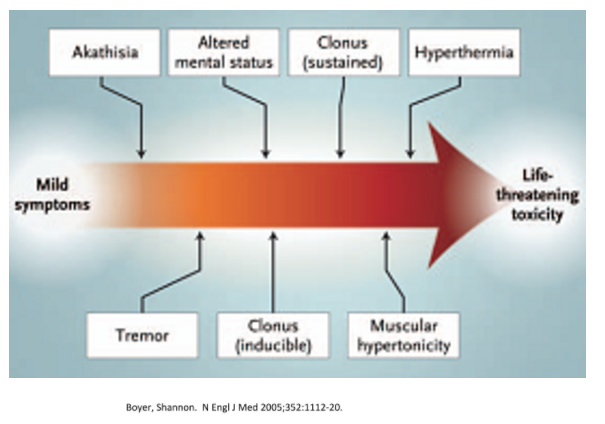 To meet Hunter Criteria, the patient must have taken at least one serotonergic agent and have one of the following

The differential diagnosis of the syndrome is extremely broad and includes encephalitis, neuroleptic malignant syndrome (NMS), hyperthyroidism, septicemia, anticholinergic toxicity, cocaine and amphetamines. Historically, NMS has been described when discussing this syndrome due to the “common presentation”. However, with a good history and physical examination, true etiology can be elicited. Serotonin syndrome (serotonin agonist) typically occurs over hours to a day versus days to weeks with NMS (dopamine antagonist) but may occur at any time during therapy. Patients with SS are hyperreflexic often with clonus and tremor as opposed to NMS where you see hyporeflexia and severe muscular rigidity (often described as lead pipe).

The first step for management is to minimize progression of symptoms. In the Emergency Department, this means recognition of serotonin syndrome and 1) remove offending agents 2) Do not add additional medication which may worsen condition. Most cases will resolve within 24-36 hours with supportive care.

Much of mild to moderate management consists of supportive care; this may include external cooling and sedatives. On the more severe spectrum of disease activity an attentive and active role must be taken. Extreme muscle activity may lead to rhabdomyolysis and acute renal failure; generous IV fluids may be necessary. Neuromuscular and autonomic instability may lead to severe hyperthermia. For patients with temperature >41C, recommendations are for immediate sedation, neuromuscular paralysis (decrease the muscular activity), and orotracheal intubation with mechanical ventilation. [Don’t use succinylcholine as your paralytic as it could cause severe hyperkalemia in this situation.]

In the Serotonin Syndrome you have clonus and hyper-reflexia [shown in the video] and in Neuroleptic Malignant Syndrome which is extreme dopamine antagonism and you have lead pipe rigidity.

Don’t use meperidol which is an opiod because it can exacerbate the serotonin syndrome.

So what opioids can you safely give in the patient already on serotonergic drugs? 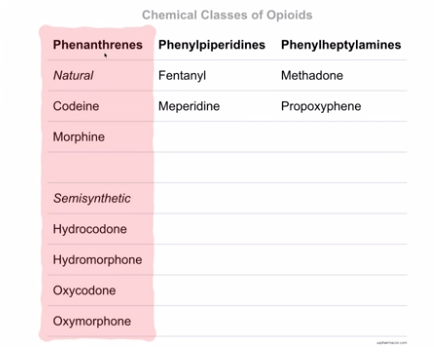 Note that dextromethorphan, which is a phenanthrene, actually does cause serotonin reuptake inhibition.

You can give morphine, codeine, and hydrocodone because there are no case reports, as of yet, that show an association with serotonin syndrome.

Technically, any of the phenanthrenes in this list [the list above] can be given. But for what it’s worth, there are a couple of case reports of oxycodone and hydromorphone although it is really questionable.

So on the flip side remember that there are case reports on fentanyl, tramadol, and methadone with serotonin syndrome. So those are ones you want to avoid if a person comes in on two SSRIs, an MAOI [or the drugs in Figure 1 above ] because you don’t want to cause or exacerbate a serotonin syndrome.

These three [morphine, codeine, and hydrocodone] have never been published with serotonin syndrome.