*Here is the complete list of the Table Of Contents of the PedsCases website. On this page the site has organized all of the contents into two groups: Clinical Presentation and Specialty Area. 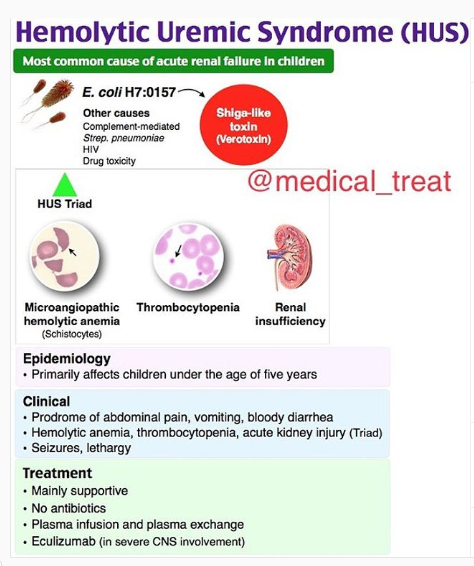 Here are some excerpts from the Script:

1. HUS is an uncommon disease, and typically presents with the triad of: hemolytic anemia, thrombocytopenia and renal failure.
2. In children it is mainly caused by Shigatoxin which is referred to as STEC HUS.
3. There is no specific treatment for STEC HUS, except for supportive medical measures including meticulous fluid management, acute medical management of electrolyte/acid-base abnormalities and dialysis as indicated.
4. Overall prognosis of STEC HUS is good, however affected children may have increased risk of developing proteinuria, hypertension and CKD, thus requiring long term follow up.
5. In rare instances, patients have atypical HUS, a recurrent form, which is associated with genetic defects in the complement system, leading to overactivation of the complement system. The prognosis of this disease has improved in the last decade with
eculizumab, a monoclonal antibody that blocks the complement system.

On exam you notice several bruises on his chins and arms, and small petechiae including where the nurse measured his blood pressure. His cardiac/respiratory and abdominal exam are normal. His mucus membranes are dry and his capillary refill time is 4 seconds.

Hemolytic uremic syndrome is characterized – as the name implies – by non-immune hemolytic anemia, thrombocytopenia and renal failure. In childhood (especially in children < 10 years of age) the majority of HUS cases are caused by an infection with enterohemorrhagic E.coli that produces Shiga toxin and is
often referred to as EHEC/STEC HUS. Cattle are the main hosts – Shiga toxin is contained in their feces and therefore infections occur via the feco-oral route. Infection occurs after eating raw/undercooked beef, petting of animals or consumption of
contaminated foods/fluids.

In our case the symptoms suggesting this patient has STEC HUS was the history of bloody diarrhea followed by signs and symptoms of anemia, thrombocytopenia and renal failure. Clinical symptoms for thrombocytopenia include bleeding, such as repeated nose bleeds or bleeding gums when brushing your teeth, as well as increased amount and size of bruises or petechiae. Clinical symptoms for anemia include fatigue
and pallor. Clinical signs for kidney failure can include decreased urine output, very concentrated urine, microscopic hematuria and proteinuria. In rare instances, there can
be macroscopic hematuria. Edema can occur as a result of kidney failure, but is often not marked as affected children are commonly dehydrated from the diarrhea and have a history of reduced oral intake.

HUS is a clinical diagnosis including the history of diarrhea and if available, exposure to life-stock or raw/undercooked meat and lab work that shows the triad of hemolytic anemia, thrombocytopenia and impairment of renal function.

Hemolytic anemia is characterized by low hemoglobin, elevated LDH – released from damaged red blood cells, low or undetectable haptoglobin as it will bind to all the released NO from damaged RBCs and schistocytes on peripheral blood smear. As the hemolytic anemia is non-immune mediated – with the exception of pneumococcal HUS – Coombs test is negative. Often patients have an increased WBC count due to high
neutrophil counts. Impaired renal function can be detected by increase in creatinine and urea or decrease of urine output. Kidney injury can lead to electrolyte disturbances such
as hyperkalemia, hyperphosphatemia, hypocalcemia and hyponatremia, as well as acidbase imbalances, elevated BP and proteinuria/hematuria. You should also confirm the presence of Shigatoxin by sending stool samples for detection of EHEC and Shigatoxin.