In this post I link to and excerpt from the Curbsiders outstanding podcast and show notes, #208 Hypothyroidism Master Class with Susan Mandel MD, MPH
APRIL 20, 2020 By DR ELENA GIBSON:

I’ve embedded the podcast below:

And here are excerpts: 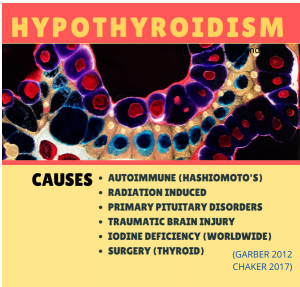 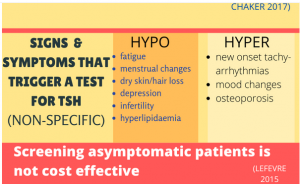 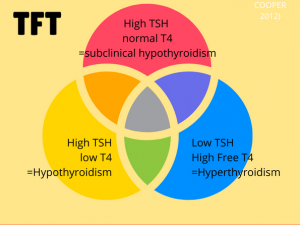 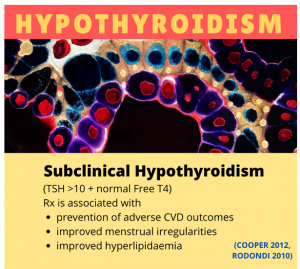 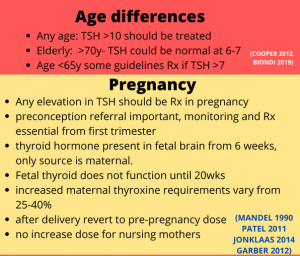 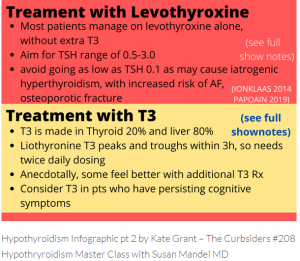 Common, but nonspecific, symptoms of hypothyroidism include fatigue, menstrual irregularities, dry skin, and mood changes. Weight gain, myxedema and diffuse goiters are rare and usually only identified in severe hypothyroidism(Chaker 2017). Dr. Mandel reminds listeners to screen for hypothyroidism in young patients with new depression, infertility,  or menstrual cycle changes. In older patients, signs/symptoms that should trigger screening for thyroid disease include hyperlipidemia, cognitive decline, tachyarrhythmias (hyperthyroidism), and osteoporosis (hyperthyroidism). Ask all patients about personal and family history of autoimmune disorders or thyroid disease as hypothyroidism is more common when either are present (Chaker 2017). Additional risk factors for hypothyroidism to ask about include prior radioiodine treatment for hyperthyroidism, radiation therapy for head/neck cancer or lymphoma, and surgical treatment for thyroid cancer or hyperthyroidism (Garber 2012).

Dr. Mandel recommends palpating the thyroid from the front of the patient’s neck using your thumbs to roll down the midline of the trachea starting around the thyroid cartilage and moving inferior. She recommends rolling your thumbs until you find the isthmus,  a “speed bump or stretched gummy worm” that inserts into the lower ⅓ of the thyroid near the cricoid cartilage (Simmel 2009). After locating the isthmus, use your thumbs to palpate medially on either side to feel the lobes of the thyroid against the tracheal cartilage for support. Palpate for any evidence of an enlarged goiter or nodules that warrant additional evaluation.

Elevated TSH with a normal free T4. TSH should be repeated, at least a month apart (or sooner if pregnant). Treatment depends on age and TSH level.

Both the TSH and free T4 are lower than the normal reference range. Free T4 levels should be used for treatment management (Garber 2012).

Dr. Mandel rarely orders TPO antibodies because the result infrequently changes management. For example, if the TSH is 20, the treatment is levothyroxine with or without positive TPO antibodies.

Subclinical Hypothyroidism: when to treat?

In all ages, this is significant subclinical hypothyroidism and one should consider treatment (Jonklaas 2014).

Treating subclinical hypothyroidism in younger patients (<65 years old) with a TSH >7 is sometimes done because it has been associated with reduced adverse cardiovascular outcomes (Biondi 2019). For patients under the age of 65, some guidelines recommend treating if TSH is >7, and treatment should be considered if TSH >5  and symptoms are present (Cooper 2012). Any subclinical hypothyroidism in pregnancy should be treated (Cooper 2012, Biondi 2019).

It is important to consider how the normal TSH range shifts upwards with age, and a TSH of 6-7 in an elderly patient could be normal. Furthermore, treatment of subclinical hypothyroidism is not recommended in elderly patients unless the TSH is >10 because observational data has identified associations between higher TSH levels and improved mortality and well-being in elderly patients (Jonklaas 2014).

In a young healthy patient (overt or subclinical hypothyroidism), start levothyroxine at a full treatment dose of 1.6ug/kg (Jonklaas 2014). In patients with an elevated BMI, consider a dose reduction as recent data suggests a need to dose more towards ideal body weight (Papoian 2019). In elderly the metabolism of thyroid hormone slows down, so lower doses are frequently required (Jonklaas 2014). For patients over 65 to 70 years old, Dr. Mandel recommends treatment should “start low and go slow” unless the patient requires full supplementation following a thyroidectomy. Start low at 25-50mcg (25mcg if cardiovascular disease) then increase by small increments of 12.5 to 25mcg with a target TSH in the high/normal range of 4-6. Cautious escalation of therapy should also be considered in patients with a history of cardiac disease to avoid precipitating angina.

Kashlak Pearl: Levothyroxine will be absorbed well as long as it is taken 3 hours before or after a meal. That said, patients’ quality of life is paramount and Dr. Mandel reinforces how consistency is the most important factor (e.g. take it 30 minutes before breakfast everyday).

When initiating levothyroxine treatment, Dr. Mandel reviews how the medication will not work like acetaminophen or ibuprofen. Patients should not expect to feel better in hours, days or even two weeks because the half life is 7 days long. A repeat TSH is checked at 6 weeks because when the thyroid hormone reaches equilibrium (Jonklaas 2014).

Kashlak Pearl: Dr. Mandel has noticed that the resolution of symptoms from hypothyroidism usually lags behind TSH normalization by 2 to 3 months.

The  FDA determines equivalency by looking at the area under the curve and time to maximal concentration of two thyroid hormone replacement medications, and they are deemed equivalent. However, problems arise in practice as clinical adequacy is determined  by measuring TSH levels, not medication levels. Therefore, if a patient switches from one brand to another, it is recommended to recheck a TSH level to ensure appropriate treatment (Jonklaas 2014). As generics are determined by pharmacy contracts, Dr. Mandel asks patients to call for a TSH check if they notice a difference in the shape/color of  their levothyroxine pill. For most patients with hypothyroidism, this probably isn’t a huge deal because it might be the difference between a TSH of 0.8 and 3,  but worrisome problems may arise in patients requiring more narrow control of TSH, such as patients with thyroid cancer (Jonklaas 2014).

Kashlak Pearl: Dr. Mandel asks patients to call for a TSH check if they notice a difference in the shape/color of  their levothyroxine pill.

The distribution TSH levels in euthryoid individuals used to establish a normal reference range (usually 0.4-4.0mIU/L) is not a bell shaped curve, and 95% of patients have TSH levels <2.5 mIU/L (Razvi 2019). Therefore, clinicians have historically aimed for a TSH in the lower range of normal, but no clear benefit has been associated with adjusting treatment to lower TSH goals in current literature (Jonklaas 2014). One cross-over study by Walsch et al. found no difference in patient reported symptoms between different treatment doses resulting in three different mean TSH levels within the reference range (Walsch 2006). Similarly a randomized trial by Samuels et al. of treatment to lower half, upper half and above normal reference range TSH goals did not identify a relationship with TSH level and quality of life,mood or cognition (Samuels 2018). Although the evidence does not support lower TSH goals, Dr. Mandel aims for a goal TSH of 0.5-3.0 in most patients, due to anecdotal evidence of improved symptoms and TSH levels seen in euthyroid patients. Excessive levothyroxine can lead to iatrogenic hyperthyroidism (TSH below normal reference range), and should be avoided due to increased risk of fracture and atrial fibrillation (Jonklaas 2014). Some guidelines recommend treating to a higher TSH goal of 4-6 in patients >70 years old (Jonklaas 2014).

The TSH should be checked every 6 weeks while titrating a dose and yearly to ensure appropriate dosing after a treatment dose is established (Jonklaas 2014).

When a woman is diagnosed with hypothyroidism, Dr. Mandel recommends immediate counseling on the importance of thyroid hormone adjustment before and during pregnancy.  Additional levothyroxine is needed during pregnancy, and dose adjustments could be necessary as early as 6 weeks (Mandel 1990). Fetal development relies on maternal T4 during the first trimester, so patients should let a provider know as soon as possible instead of waiting until the first trimester appointment (usually around 11-12 weeks) (Patel 2011). Required levothyroxine dose increases vary from approximately 25-40% based on how much functioning thyroid the mother has left, with higher dose adjustments required for surgical hypothyroidism compared to autoimmune (Jonklaas 2014). Until a pregnant patient is able to have thyroid function testing completed, Dr. Mandel will often recommend  taking 2 extra pills per week to avoid low thyroxine levels. Furthermore, remind patients to take their prenatal vitamin and levothyroxine at different times to avoid decreased levothyroxine absorption. Postpartum, dosing should return to the same dose before pregnancy and there are no changes required while breastfeeding (Garber 2012).

This entry was posted in Curbsiders, Endocrinology. Bookmark the permalink.