Google+ Links To And Excerpts From "Clinical guidelines for the management of treatment-resistant depression: French recommendations from experts, the French Association for Biological Psychiatry and Neuropsychopharmacology and the fondation FondaMental - Tom Wade MD

Links To And Excerpts From “Clinical guidelines for the management of treatment-resistant depression: French recommendations from experts, the French Association for Biological Psychiatry and Neuropsychopharmacology and the fondation FondaMental

In this post, I link to and excerpt from Clinical guidelines for the management of treatment-resistant depression: French recommendations from experts, the French Association for Biological Psychiatry and Neuropsychopharmacology and the fondation FondaMental [PubMed Abstract] [Full-Text HTML] [Full-Text PDF]. BMC Psychiatry. 2019 Aug 28;19(1):262.

The above article has been cited by 6 articles in the PubMed Archives.

There are 124 articles similar to the above article in the PubMed Archives.

All that follows is excerpted from the above article.

Based on clinical expert consensus, the definition of treatment-resistant depression adopted is the failure of two ADT of adequate duration and dose. The optimal duration is 4 to 6 weeks when the targeted dose is obtained

A history of an unresponsive form of depression is considered the main predictive factor of treatment-resistance and should be meticulously considered. Other potentially predictive indicators are considered, including:

The duration of the untreated episode and early or late age at onset of the first depressive episode as well as the illness severity or onset of depression during the peri-menopausal period are recognised as increasing the risk for treatment resistance. Of note, childhood adversity was not explored in our questionnaire, despite it is a well-established prognostic factor for TRD.

A mood diagram, a structured diagnostic interview as well as a specific questionnaire exploring anxiety disorders can be non-systematically administered.

For patients with anxious features, the adjunctive use of benzodiazepines or hydroxyzine is systematically recommended. The use of buspirone, pregabalin or an ADT belonging to a different pharmacological class is possible in this indication.

The use of an ADT from the same pharmacological class is not recommended.

For patients with sleep disorders, the adjunctive use of hypnotic (zolpidem or zopiclone) is systematically recommended. The use of hydroxyzine, benzodiazepines or an ADT with a different pharmacological profile is possible as an alternative therapeutic option.

For patients with a high risk of self-harm injury, no clear consensus has emerged regarding the use of adjunctive treatment. The experts have suggested several possible options based on the prescription of hydroxyzine, benzodiazepines, second-generation antipsychotics or lithium.

Several treatments are considered as having an antidepressant action:

Some clinical characteristics are seen as quality evidence to guide the choice of an ADT, as follows:

Once the decision is made to switch from one ADT to another one, the clinician should consider how this strategy can be implemented. There are three major types of a ADT switch strategies that can be envisaged [13]:

The concurrent switch is recommended, except when the patient is currently receiving a monoamine oxidase inhibitor (MAOI) medication. In that case, the sequential approach is required during the switching process.

Switching strategies are recommended in the following indications:

In the first-line, inter-class switch is recommended. The different molecules proposed according to the initial treatment are represented in Table 1. 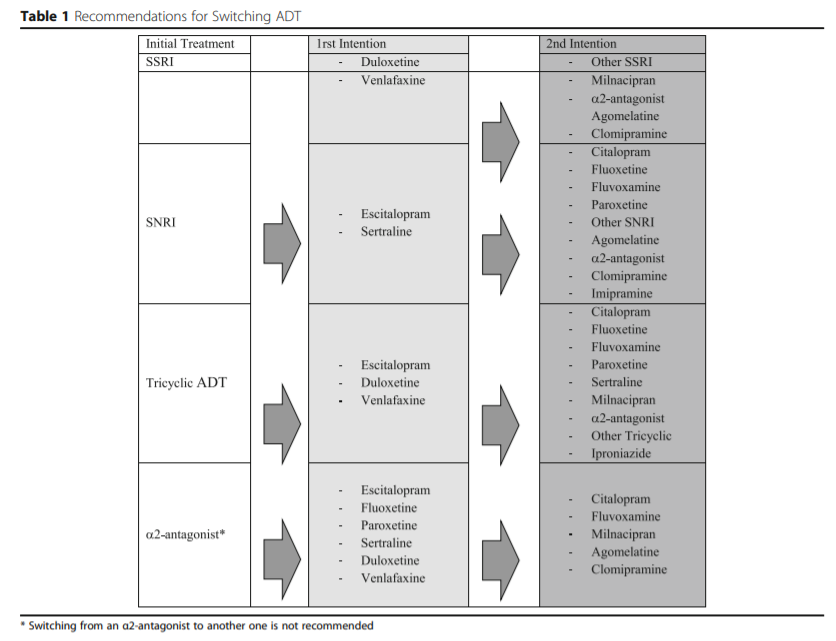 The combination strategy (i.e. adding another ADT to an existing one) is only recommended in cases of partial response, after 4 to 6 weeks of adequate treatment. In the first-line treatment, the recommended strategies consist of the following combinations:

The recommended doses range from 15 to 30 mg per day for mirtazapine and 30 to 60 mg per day for mianserine [mianserine is not available in the U.S]. In the second-line treatment, an association between SSRIs, SNRIs or tricyclic ADT and agomelatine can be proposed. The maintenance of the combined ADT is recommended for a period of six months once clinical remission is obtained. A period of one year is not justified, except in specific indications.

The potentiation strategy is only recommended in cases of partial response, after 4 to 6 weeks of adequate treatment. Adding lithium or quetiapine to the ongoing ADT is recommended to enhance ADT efficacy (Table 2). The use of thyroid hormones or aripiprazole is proposed as a second intention. In this indication, second-generation antipsychotics such as risperidone, olanzapine, clozapine, amisulpride) or anticonvulsants (apart from lamotrigine) are not recommended.

Thyroid hormone supplementation is recommended in combination with SNRIs or tricyclic ADT, and eventually with SSRIs or α2-antagonists. No consensus could be reached regarding the targeted doses, but the dose typically used for this purpose is 25 to 50 μg/day of L-T3. A pre-therapeutic assessment is recommended and includes:

In the absence of a consensus, the targeted dose should allow TSH levels ranging from 0.1 to 1 μg/L to be achieved. 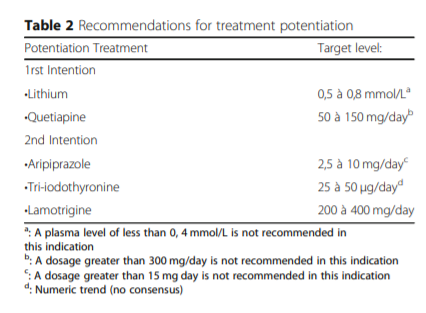 Two main criteria were proposed to the experts that could guide the selection of the appropriate therapeutic strategy: the intensity of the current depressive episode and associated clinical features.

No clinical features support the use of different ADT in combination in first-line.

This entry was posted in Depression, Guidelines. Bookmark the permalink.