Google+ Links To And Excerpts From "Prevention of Stroke in Patients With Silent Cerebrovascular Disease: A Scientific Statement for Healthcare Professionals From the American Heart Association/American Stroke Association" - Tom Wade MD

Links To And Excerpts From “Prevention of Stroke in Patients With Silent Cerebrovascular Disease: A Scientific Statement for Healthcare Professionals From the American Heart Association/American Stroke Association”

In this post, I link to and excerpt from Prevention of Stroke in Patients With Silent Cerebrovascular Disease: A Scientific Statement for Healthcare Professionals From the American Heart Association/American Stroke Association [PubMed Abstract] [Full-Text HTML] [Full-TextPDF]. Stroke. 2017 Feb;48(2):e44-e71.

The above article has been cited by 84 articles in PubMed Central.

All that follows is from the above article.

Two decades of research has generated important insights into the prevalence, manifestations, risk factors, and consequences of silent cerebrovascular disease.4 Silent brain infarcts, also called silent strokes in the literature, are subcortical cavities or cortical areas of atrophy and gliosis that are presumed to be caused by previous infarction.1 White matter lesions of presumed vascular origin represent areas of demyelination, gliosis, arteriosclerosis, and microinfarction presumed to be caused by ischemia.4 They may be visible as areas of white matter hyperintensity (WMH) on magnetic resonance (MR) imaging (MRI) or white matter hypodensity on computed tomography (CT). Microbleeds are thought to represent small areas of hemosiderin deposition from previous silent hemorrhages and are visible only on MRI sequences optimized for their detection.5 A previous statement from the American Heart Association/American Stroke Association (AHA/ASA) on the definition of stroke includes, for the first time, definitions of silent brain infarcts and silent brain hemorrhages as manifestations of cerebrovascular disease.6

Although often called silent because they occur in the absence of clinically recognized stroke symptoms, population-based epidemiological studies show that these manifestations of cerebrovascular disease are, in fact, associated with subtler cognitive and motor deficits on standardized testing, cognitive decline, gait impairment, psychiatric disorders, impairments in activities of living, and other adverse health outcomes.7–9 Furthermore, both silent brain infarcts and WMHs are associated with future incident cognitive decline and stroke.10–13 Therefore, these lesions are neither silent nor innocuous. Consequently, some have advocated that the term covert cerebrovascular disease is a more appropriate label than silent disease.14 A previous AHA/ASA statement on vascular contributions to cognitive impairment and dementia reviewed the relationship between silent cerebrovascular disease and clinically identified cognitive impairment.15 Salient findings and recommendations in the statement included that a pattern of diffuse, subcortical cerebrovascular pathology, identifiable on neuroimaging, can support a diagnosis of probable or possible vascular cognitive impairment. However, that statement did not offer guidance for stroke prevention.

A comprehensive MRI evaluation for silent cerebrovascular diseases should include a minimum of the following sequences: axial diffusion-weighted imaging with both a trace image and an apparent diffusion coefficient map, fluid-attenuated inversion recovery (FLAIR), T2-weighted and T2* susceptibility-weighted imaging (or T2*-weighted gradient-recalled echo if susceptibility-weighted imaging is not available), and T1-weighted imaging. The diffusion-weighted trace image and apparent diffusion coefficient map are important for identifying recent infarcts. Sequence parameters should be consistent with recommendations for neuroimaging from the American College of Radiologists,20 including that the slice thickness should be ≤5 mm and in-plane resolution should be ≤1×1 mm. For increased sensitivity to small infarcts and microbleeds, slice thickness should ideally be ≤3 mm and slice gaps should be minimized or slices should be acquired with no gaps. Whole-brain coverage in all sequences should be used. Three-dimensional T1-weighted thin-section isotropic sequences can be reformatted to allow coregistration and to quantify brain volume. An MRI field strength of 3.0 T is preferred for higher resolution; however, modern 1.5-T MRI scans are also acceptable.21 In either magnet, brain coils should always be used. Table 2 outlines the proposed MRI acquisition standards for neuroimaging for clinical care or epidemiological studies.16 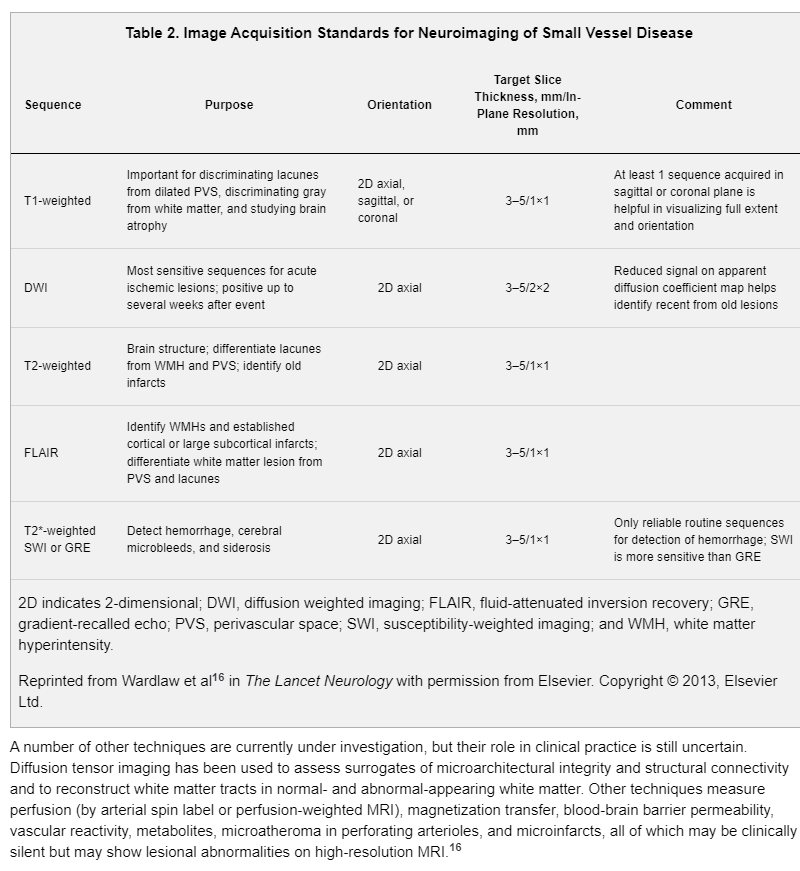 Most silent cerebrovascular findings on MRI are related to cerebral small vessel disease. The first neuroimaging consensus document for classification of small vessel disease was proposed in 2006 by the US National Institute of Neurological Disorders and Stroke and the Canadian Stroke Network as part of the development of standards for research on vascular cognitive impairment.22 More recently, a scientific statement from the AHA/ASA incorporated neuroimaging evidence of cerebrovascular disease for vascular cognitive impairment and dementia.15

The radiological definitions and terms used to describe silent cerebrovascular disease have varied substantially in research studies and in clinical practice.16,23,24 STRIVE (Standards for Reporting Vascular Changes on Neuroimaging) was an international collaboration to recommend standards for research and to develop definitions and imaging standards for describing signs of small vessel disease on MRI and CT in the context of aging and neurodegeneration (Table 3).16 These terms and definitions apply to currently recognized manifestations of cerebral small vessel disease, which accounts for the majority (85%–90%) of silent cerebrovascular disease. However, a minority (≈10%–15%) of silent cerebrovascular disease is instead manifest as cortical infarcts or larger (>15 mm) subcortical infarcts related to large artery disease, cardioembolism, or other mechanisms rather than small vessel disease.25 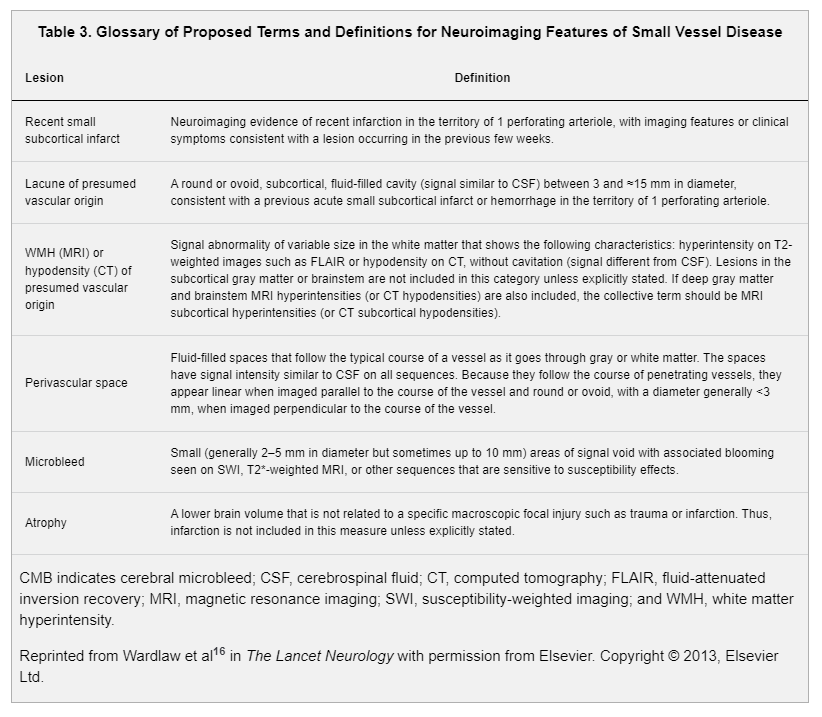