In this post I review and excerpt the teaching points from Emergency Medicine Cases‘ ECG Cases 20 – Approach to Bradycardia and the BRADI Mnemonic. Written by Jesse McLaren; Peer Reviewed and edited by Anton Helman, April 2021. 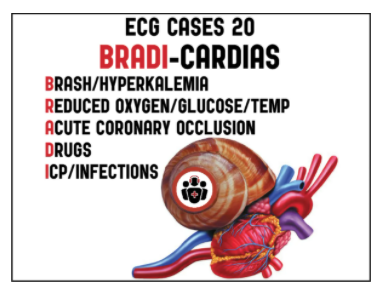 In this ECG Cases blog we look at 10 patients’ ECGs* who presented with bradycardia, an approach to identify reversible causes with the BRADI mnemonic and use ECG interpretation to guide management.

Bradycardia and the BRADI mnemonic

According to a retrospective study of nearly 300 patients who presented to the ED with symptomatic bradycardia (with median ventricular rate of 33), the most common chief complaints were: syncope, dizziness, collapse, angina, and dyspnea/heart failure. The basic maneuver of laying the patient flat eliminated symptoms in 40% of bradycardic patients, while the remaining 60% received ACLS intervention(s): atropine in 80%, epinephrine or dopamine in 50%, and transcutaneous pacing in 30%. Regardless of initial management, half of all patients ultimately required a permanent pacemaker, but the other half had a reversible cause. As the article emphasized: “identification of treatable, reversible causes of the bradycardia is the key for successful management.”[1]

The ECG can localize the mechanism of bradycardia/blocks, based on the anatomy of conduction. Normal conduction begins in the SA node and depolarizes the atria (P wave), pauses in the AV node (PR interval) and then travels rapidly through the His bundle and bundle branches to depolarize the ventricles (QRS). Abnormalities can happen at any of these three levels, as outlined by the ACC/AHA guidelines [2]:

The physiology of conduction depends on coronary perfusion and metabolic conditions, and is influenced by the autonomic nervous system and medications. This outlines the list of acute reversible causes of bradycardias/blocks, which can be remembered by the mnemonic BRADI: