Resource (1) discusses some of the challenges of neonatal IO placement and reports a case of a severe complication:

We compared 10 tibia X-rays in three age groups which were: 1- to 28-day-old full-term neonates, 1- to 12-month-old infants, and 3- to 4-year-old children, archived in the database of the X-ray department. Quantitative measurements of the medullary diameter in antero-posterior and lateral dimensions of these X-rays were made at the recommended site of IO access anteromedial surface of the tibia. Children with syndromes or deformities in lower extremities were excluded. The measurement site was 1 cm and 2 cm below the proximal end of the tibia for neonates and infants respectively, because, it was not possible to visualize the tibial tuberosity or epiphyseal plate in neonates and infants in these X-rays (Fig. 2). The measurement site in 3- to 4-year-old children was 1 cm below the tibial tuberosity (Fig. 2). The results of the measurements are shown in Table 1. 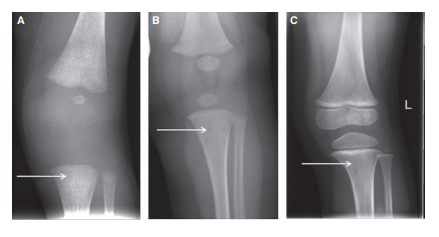 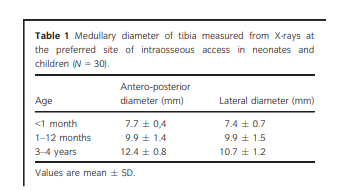 Achieving venous or IO access is challenging
during neonatal resuscitation especially after the
first days after birth, when the readily accessible
umbilical vein is not available.2,3 IO access can offer a fast and safe method for gaining an emergency access in a critically ill child.1–4 . . .  Unfortunately, the mean medullary diameter of the proximal tibia at the recommended site for IO access is only 7 mm in a neonates and 10 mm in infants (Table 1). . . . The length of the tip of the smallest pediatric needle of the EZ-IO device, used in the present case was 4 mm. The stylet and Y-shaped needle has to be placed within the medullary cavity when inserting the needle (Fig. 3). This makes the correct placement of the IO needle in neonates and
infants and the avoidance of needle dislocation
extremely challenging.*

* Carefully study  figure (3) below to see why. 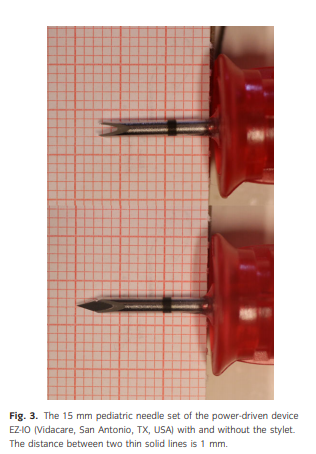 When using a power-driven EZ-IO device in neonates, the drill has to be stopped within the average margin of 3 mm so that the needle will remain in the IO space and not penetrate the opposite cortex. The manufactures of the IO devices such as the EZ-IO should consider providing different sizes of IO needles that have been adjusted in proportion to the patient’s size and that also corresponds to the bone marrow space instead of
providing a shorter version of the same caliber
of 15 gauge adult needle for neonates and infants
(length 45 mm vs. 15 mm).

Extravasation that caused compartment syndrome, which in the worst case scenario, resulted in amputation of the leg has been reported at least six times previously in case reports,1,3,4,12 but surprisingly it is not even mentioned as a possible complication in some review articles.5–9 Almost all of the six previously reported cases of compartment syndromes that lead to leg amputations have occurred in neonates and infants, including one septic shock survivor that had bilateral below knee amputations.5–9 . . .  It is highly likely that
the cases with severe compartment syndromes
are underreported, especially when taking into
consideration the most common scenarios of IO
needle placement such as pediatric cardiac arrest
and drowning, which have low survival rates.

The following are excerpts from Resource (2) below on the use of Point of Care Ultrasound (POCUS) to detect a misplaced intraosseous access needle that  caused compartment syndrome in an adult patient. The procedure described is applicable to pediatric patients also.*

*See also Resource (4) below for a very clear explanation of the POCUS technique for verifying correct IO placement and function.

POCUS use has been described as a tool to facilitate evaluation of an IO needle by looking for Doppler signals in the area surrounding the IO during infusions. POCUS can add to patient care and safety by identifying malfunctioning IO needles and potentially preventing complications. We present a case report in which POCUS aided in rapid recognition of IO needle malfunction and in the
identification of compartment syndrome.

POCUS was performed to evaluate the functionality of the IO needle [placed in left proximal tibia]. A high-frequency linear probe (5-10 MHz; SonoSite®
M-turbo) with color Doppler was used to evaluate the area proximal and distal to the IO access in transverse (short) plane of the tibial bone. Color Doppler showed absence of flow in the IO space during injection of a small amount of normal saline,
concerning for inappropriate IO needle placement (Image 2). 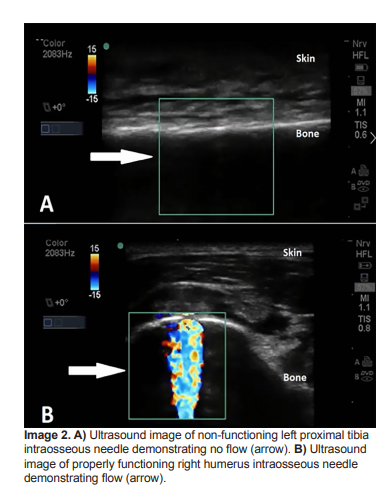 Subsequently, the tibial IO needle was removed and a second, 45 mm IO needle was placed into the right humerus (Image 2B). The patient was resuscitated and stabilized, receiving medications without complication through the humeral IO infusion.

What is the major learning point?

Just as radiographs are used to confirm proper
placement of central venous catheters, ultrasound
can be used to evaluate placement and functionality
of IO needles.

Point-of-care ultrasound can be used to improve
patient safety by rapidly identifying malfunctioning
IO needles and preventing complications such as
compartment syndrome.

The following are excerpts from Resource (3) below, How to Place and Secure an IO in a Peds Patient by pediatric paramedic Rebecca Engelman from EMCrit on July 12, 2012

How to Place an IO

I’m a critical care paramedic and up until very recently I spend 95% of my time working in pediatric critical care transport.
Tibial IO in small peds (<10kg) can be tricky if you don’t do a lot of them. When everyone learned to insert EZIOs in adults, they were probably taught to drill until they felt a ‘pop’, then stop…then promptly forgot this direction and drilled until the hub of the catheter was resting on tissue. In adults, this usually doesn’t lead to problems due to the size of the medullary space. In small pediatric patients however, sinking the IO to the hub will result in the needle passing THROUGH the tibia. If this is not recognized upon insertion or upon fluid administration it can lead to the complications mentioned by others above.

Everything that I’m about to say is purely my opinion based on my experiences:
– Let someone who knows what they are doing put the EZIO in. We used to have a lot of problems with IO (recognized) failure until we stopped letting residents put them in and made it an attending and critical care paramedic only skill.

– If you don’t put (not so) EZ-IOs into small kids a lot, consider using a manual IO. I personally think they are a lot harder to screw up. When I wasn’t working primarily in peds, I would use EZ-IO for adults and manual IOs for small kids (<10kg). I really like the Jamshidis* because they have an adjustable flange so you can set the maximum depth.

*This is not an affiliate link nor is it an endorsement as I have not purchased this. I just put it in for my convenience.

– Once you get the IO in, flush vigouorously, look for an signs of infiltration, then SECURE THE HECK OUT OF IT. Any movement of the catheter increases the risk of infiltration. Be vigilant about checking for infiltration and checking distal perfusion.*[A better way to check the IO line]

How to Secure an IO

After placing an IO needle in the target site using standard technique (Figure 45.1), confirmation is achieved in the following manner. A linear-array high frequency transducer is placed immediately distal to the insertion site of the IO needle to obtain a transverse, short axis view of the tibia and surrounding soft tissue. The transducer should be angled slightly cephalad to intercept the approximate plane of the IO needle. (Fig 45.2)

The depth of field should be adjusted such that the cortical surface appears in the near field of the display. A color Doppler or color power Doppler box should then be placed over the gray-scale image such that both the marrow cavity and the soft tissue are included. At this point, 3 – 5 ml ofcrystalloid is infused into the IO line using a syringe flush. Visualization of color flow within the bone confirms correct placement of the line (Figure 45.3). [5,6] No color Doppler signal should be present outside of the cortex.

In cases where no intraosseous flow is observed and where there is concern for potential penetration through the posterior cortical surface (i.e. a “through-and-through needle placement), the transducer can be moved to the opposite side of the leg to assess for flow in the soft tissue opposite the insertion site. Such a finding would confirm misplacement of the line into the posterior soft tissues.