Google+ Link To And Excerpts From ECG Cases 3: Can you find the subtle inferior MI? From EMC - Tom Wade MD

Link To And Excerpts From ECG Cases 3: Can you find the subtle inferior MI? From EMC

In this post I link to and excerpt from Emergency Medicine Cases’ ECG Cases 3: Can you find the subtle inferior MI? Written by Jesse McLaren; Peer Reviewed and edited by Anton Helman. November 2019. 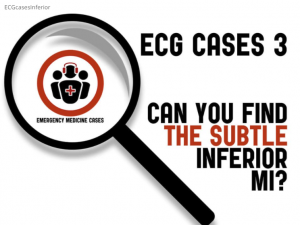 In this ECG Cases blog we explore 8 patients with potentially ischemic symptoms, to highlight pearls and pitfalls of inferior MI. Can you identify which ones had acute coronary occlusion?

According to STEMI guidelines, patients with inferior MI only qualify for emergent reperfusion if they have at least 1mm of ST elevation in two contiguous inferior leads. But the problems with this threshold, and a solution, were recognized more than 25 years ago.

In 1993 a study of 107 patients with inferior MI, only 61% of patients had 1mm of ST elevation in all three leads, and this only rose to 87% if the threshold was dropped to 1mm of ST elevation in one inferior lead–meaning that 13% of inferior MI had no significant ST elevation in any lead. But 0.5mm ST depression in aVL was 97% sensitive for identifying inferior MI, including the 7.5% of patients for which it was initially the only abnormality.[1] aVL is the only lead reciprocal to the inferior wall and is very sensitive for inferior MI, and like other reciprocal changes can precede ST elevation. It should be noted that this study excluded patients with baseline ST depression in aVL: previous inferior MI or cardiomyopathy, aberrant conduction (LVH or LBBBB), and those with inferior T wave inversion.

More recent studies have found that 18% of STEMI patients have ST elevation less than 1mm (two-thirds of involving the inferior wall), and only a quarter received reperfusion within the first hour of arrival [2]. Not only is reciprocal ST depression in aVL more sensitive than STEMI criteria for identifying inferior MI, it also excludes one of its mimics: pericarditis. In a study of 426 cases of inferior MI , of which only 87% met STEMI criteria, 99% had some ST depression (0.25mm) in aVL; and zero of 49 cases of pericarditis had any ST depression in aVL. The study excluded those with aberrant conduction (LBBB, paced rhythm, WPW), which produce can produce secondary repolarization abnormalities including ST depression in aVL . As the authors concluded,

“In addition to differentiating STEMI from pericarditis, our findings will also be useful for identifying subtle inferior STEMI–in which the STE in the inferior leads is not large enough to meet traditional STEMI criteria (1mm in 2 contiguous leads)…We recommend scrutiny of lead aVL in patients with a suspicion of acute inferior MI. Those with any depression in aVL may have subtle coronary occlusion and should be intensively evaluated with serial ECGs, immediate formal echocardiography, or angiography, instead of a more relaxed approach in which MI is only ruled out by biomarkers.”[3]

In this ECG Cases blog we explore 8 patients with potentially ischemic symptoms, to highlight pearls and pitfalls of inferior MI. Can you identify which ones had acute coronary occlusion?

Patient 1: 50yo with indigestion, machine “nonspecific”

NSR, normal conduction/axis, no hypertrophy. Subtle concave inferior STE in II/III/aVR with reciprocal ST depression in aVL, along with anterior tall R wave and relative ST depression from infero-posterior MI. Trop negative and sent home. Came back next day with the same symptoms, with a trop of 20,000 and inferior Q waves. Cath lab: RCA occlusion